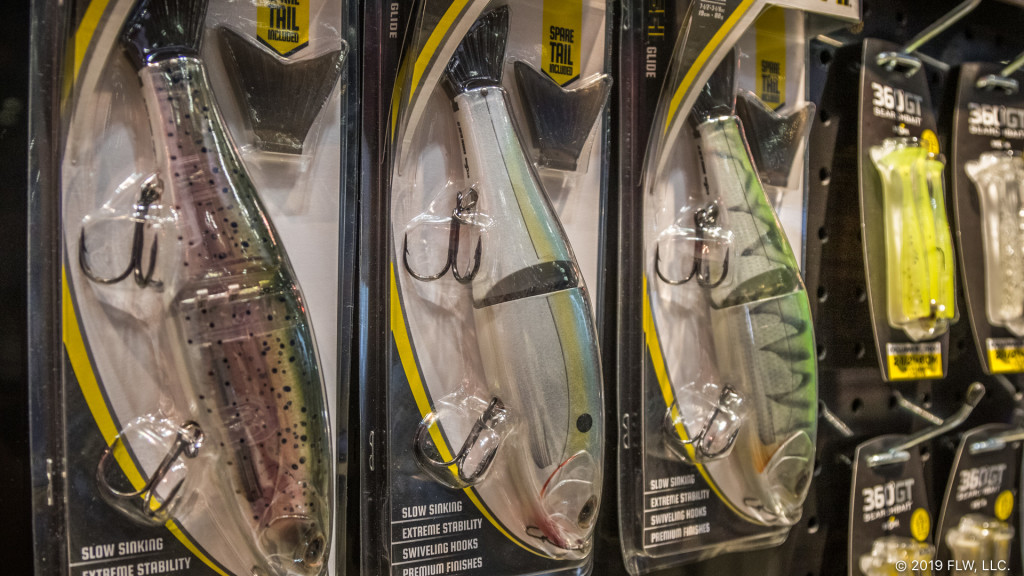 If you clicked on this article hoping to learn about the new trolling motors released at ICAST 2019, they’re not here. But don’t worry because we’ll have a video review of all the motors later this week.

In the meantime, here’s a primer on some of the baits that we thought stood out at the show. It’s not a comprehensive list. Rather, it’s just a taste of what will probably make a splash on the market in the coming months. 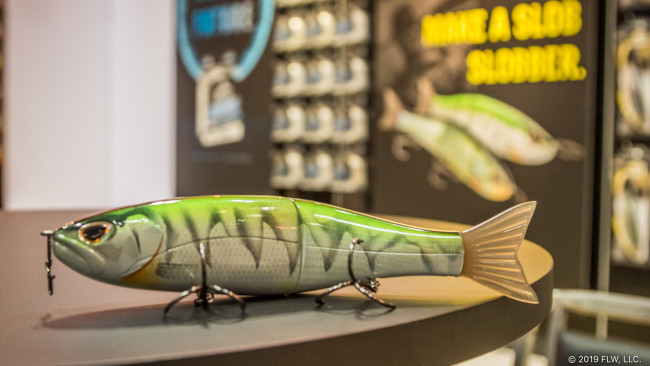 This 7 1/2-inch-long glide bait already proved its worth last fall when Carl Jocumsen cracked more than 20 pounds with it on the first day of the Costa FLW Series Championship at Lake Guntersville. Now finally released to the public, the Arashi Glide will be a popular option for the big-bait fan. The bait comes with a heavy-duty snap on the nose and cool swiveling hook hangers in the belly. Its tail is replaceable. Other than that, it has all the features of a good glide bait: a slow sink and a stable glide at various retrieve speeds. Storm included a lot of great color patterns to match bass forage across North America, so there’s an option for anyone. It’s also priced right at $34.99. 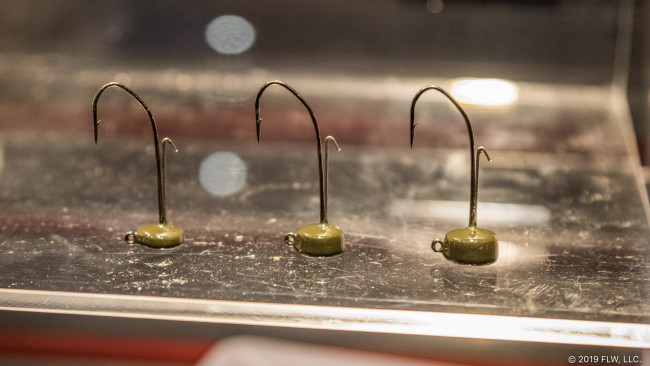 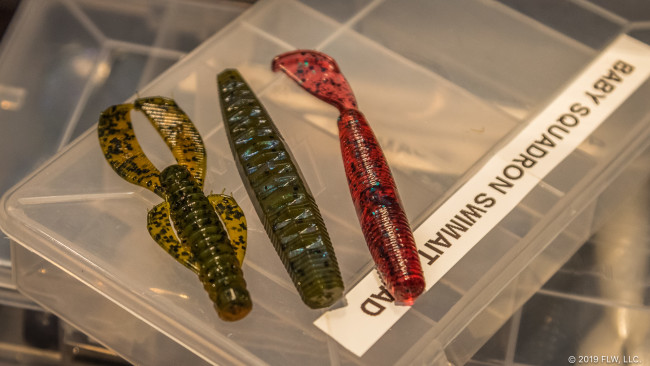 Ned rigs are hot right now, and there are plenty of new plastics and jigheads at the show this year. Options range from high-dollar tungsten heads to wacky creature-style baits to put on them. Strike King launched a nice collection of new Ned rig options worth checking out. The Ned Ocho is an extension of the popular stick bait that’s fatter in the center and tapers down on each end. Pronounced ribs line the sides. The Rage Ned Bug is a tiny version of one of the better beaver-style baits on the market. And the Ned Cut-R Worm has a stick bait body with a Rage-style single tail. It’ll probably also be a baller drop-shot worm. They cost $5.99 to $6.99 per pack at Tackle Warehouse. Strike King also created the Tour Grade Ned Rig Head. It has a sickle-style hook, wire keeper and a flat disc-shaped head. It stands up well with a variety of plastics, but also creates a bit of wobbling action if you like to slowly wind a bait along bottom. The head comes in 1/16, 1/8 and 3/16 ounce for $4.99 per pack. 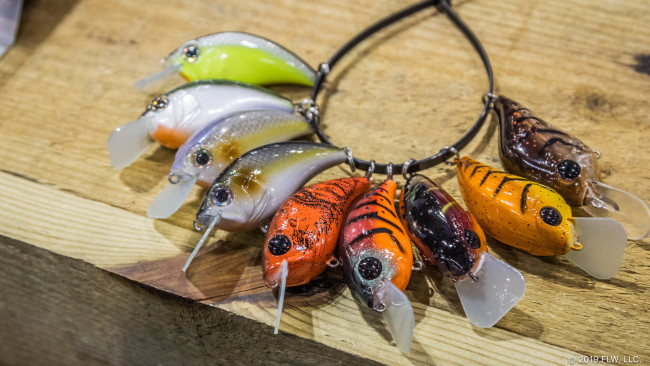 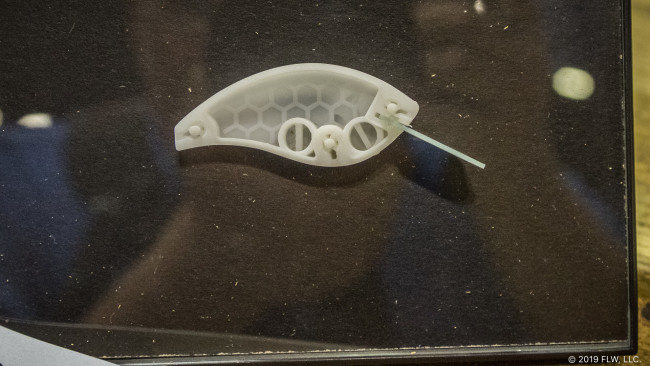 Pro angler Mark Daniels Jr. has a new signature-series square-bill crankbait by Bill Lewis, which continues to expand its hard-bait lineup beyond the classic Rat-L-Trap. The new plug is called the MDJ SB-57, and it’s a nicely made bait. To keep the walls thin but maintain a durable body, the designers incorporated a honeycomb internal structure. The circuit board lip is also plenty strong enough to withstand constant abuse against rocks and other cover. Daniels says it dives 4 to 5 feet on 12- to 15-pound-test line. A bunch of good bassy colors are available. The bait sells for $8.99. 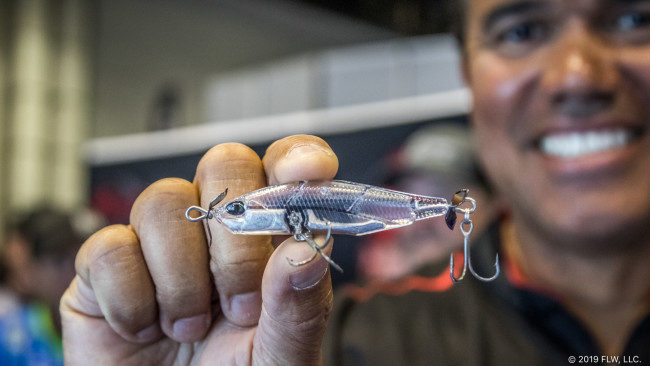 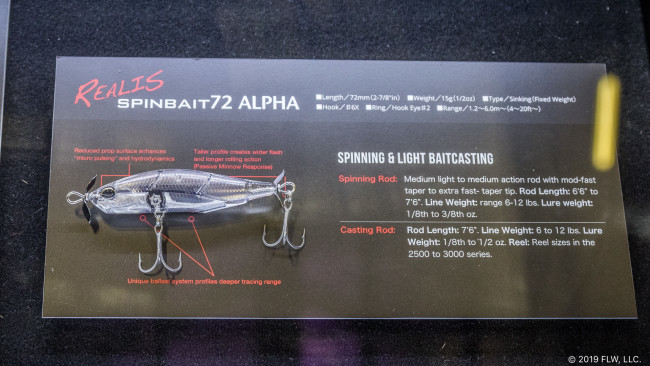 If you’re new to spybaits, you’ll want to start the learning process with the great baits made by DUO Realis, which was the first company to put this finesse hard-bait tactic on bass fishing’s radar. Most of the baits are designed to be fished with light line on spinning tackle. The Spinbait 72 ALPHA can be fished that way, but it’s also heavy enough to chuck on light baitcasting gear. At 1/2 ounce and 2 7/8 inches, the 72 ALPHA occupies a new class among spy baits. It can be fished to nearly 20 feet but gets there fast enough to stay efficient. The other revision to this bait is in its profile. Viewed from the side, the body is much thicker and shorter than previous DUO models for imitating various deep-bodied baitfish. It costs $13.99 at Tackle Warehouse. 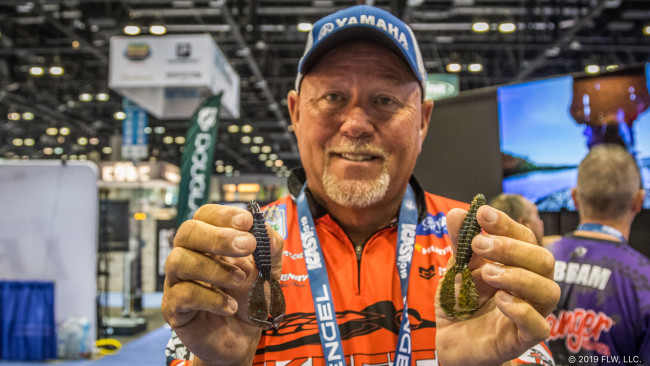 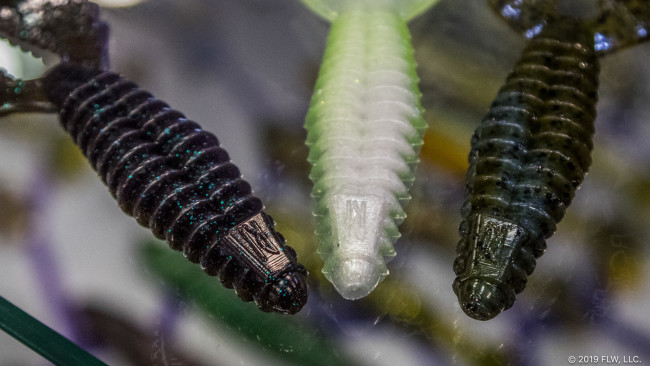 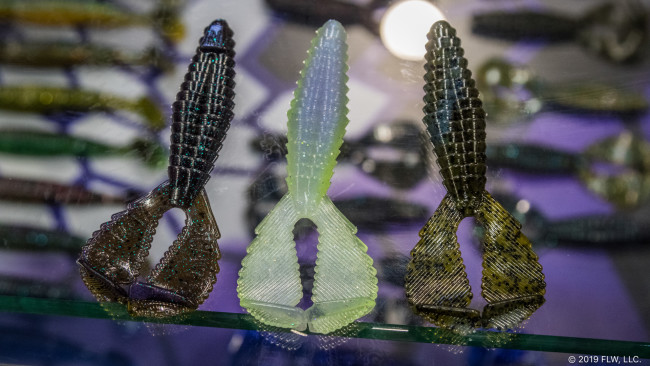 The Spicy Beaver is Reaction Innovations’ most versatile iteration of its popular Beaver family of soft baits. The design of the flapping legs was perfected by pro Matt Herren so the feet stay closer together when fished at a fast speed, resulting in a strong thump and a bait that slips through cover easily. The body is a little narrower than the classic Sweet Beaver, and an extra hunk of plastic near the nose helps extend the life of the bait and help it hold securely on straight-shank flipping hooks – a cool little touch. Use it on a wobble head, as a sick swim jig trailer, as a flipping bait or a host of other ways. It costs $4.99 for six at Tackle Warehouse. 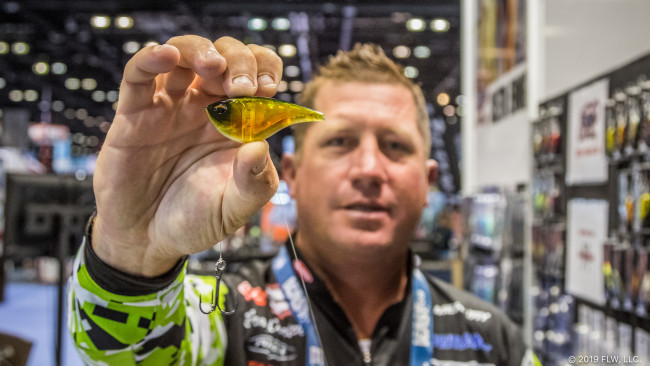 FLW pro Bradley Dortch wanted to create a new take on the classic rattle bait for fishing grass, so he partnered with Jenko to create the Bradley Dortch Trapline Rip Knocker. It’s a line-thru type lipless bait with a single belly treble. Jenko had to widen the bait and tweak the form to give it the perfect action, and Dortch believes the company nailed it. He says it’s killer for ripping through or over grass and that once a bass is hooked, it stays pinned clear to the net. The bait weighs 5/8 ounce and will cost about $7.99. It comes in 12 colors. 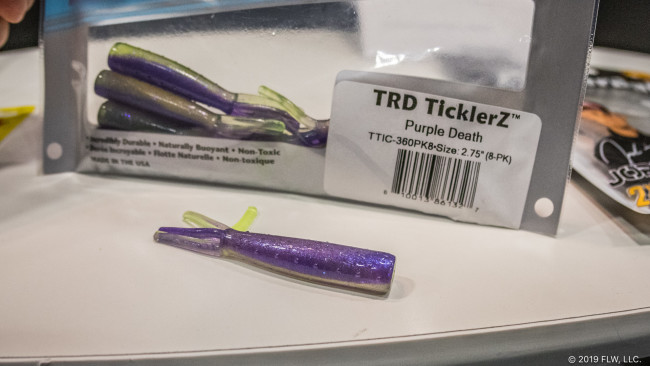 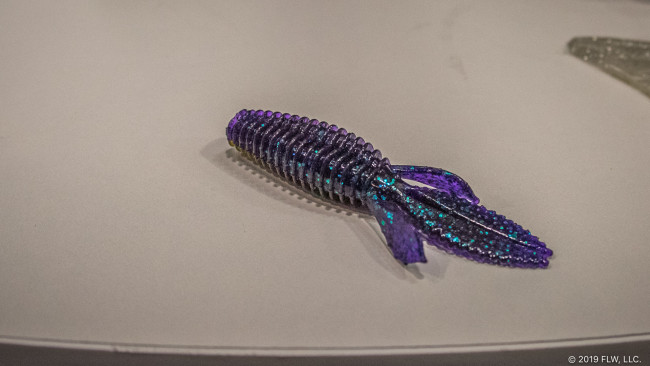 The Z-Man TRD TicklerZ and TRD BugZ are part of an expansion of the company’s popular line of Ned rig plastics. The TicklerZ has a traditional stick worm body with four tiny wiggly appendages that will probably torment the heck out of a lot of spawning bass next spring. The BugZ has a beaver-style body sized to fit a Ned head. Both are made with Z-Man’s longlasting ElazTech plastic. Each costs $4.49 per pack. 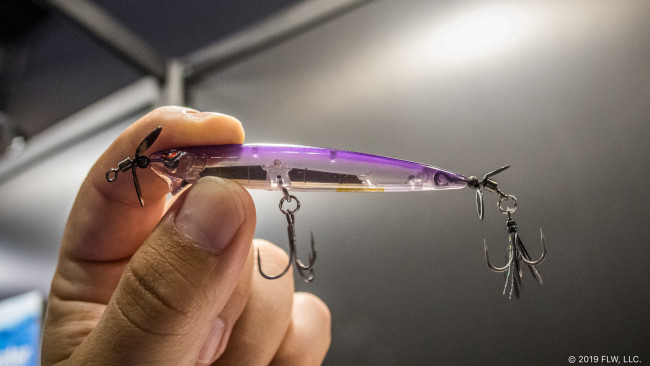 Here’s another new spy bait joining what’s becoming a crowded market. The Spin John 80 comes in similar color patterns as SPRO’s jerkbait lineup. The company says the swivel in front of the line tie and another between the rear hanger and feathered rear treble help enhance the bait’s “natural shimmy and rolling action” as it falls. More importantly, the swivels should help you land more bass that bite, which is a good thing with this finesse hard bait type. Counter-rotating blades and a unique chin beneath the bait’s nose combine for a little more action than some other spy baits. The bait costs $12.99 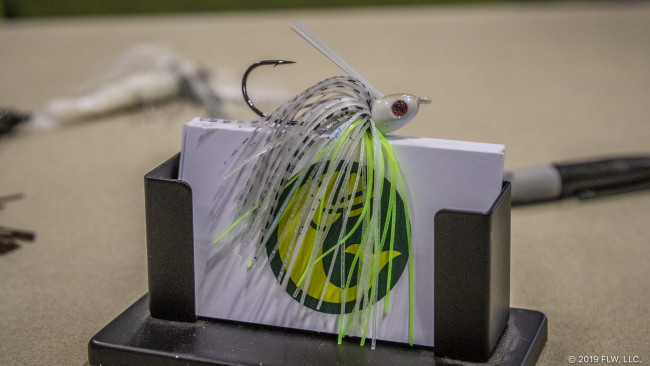 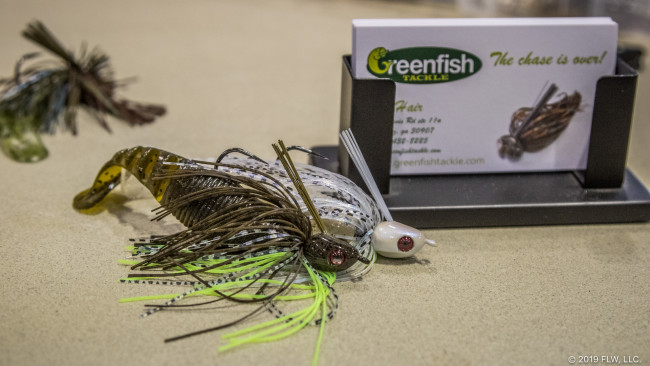 “Chibi” means tiny or little in Japanese, and that’s the word pro Shin Fukae used to describe his original Greenfish Tackle Chibi Jig and his new Chibi Swim Jig. The latter has a light-wire Gamakatsu offset O’Shaughnessy hook and a very light weedguard. It’s made to fish in open water over grass or around any kind of cover where total snag prevention isn’t a must. The swimmer comes in 5/16, 7/16 and 9/16 ounce and sells for $5.39. 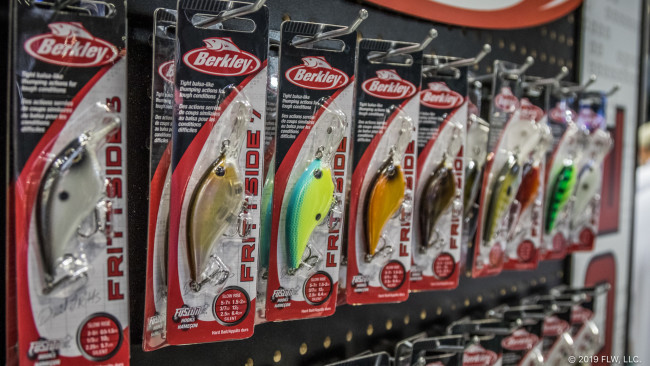 Flat-sided crankbaits aren’t new, nor is the genesis of this crankbait, but the finished product is an addition to Berkley’s hard-bait lineup. Inspired by David Fritts’ Bassmaster Classic-winning bait, the Frittsidecrankbait comes in three sizes that dive 2 to 5 feet, 5 to 7 feet and 7 to 10 feet. The two bigger models feature weighted bills. All are designed to track straight and true with a moderate action for catching fish in cold water or high-pressure situations. The price is $8.99. 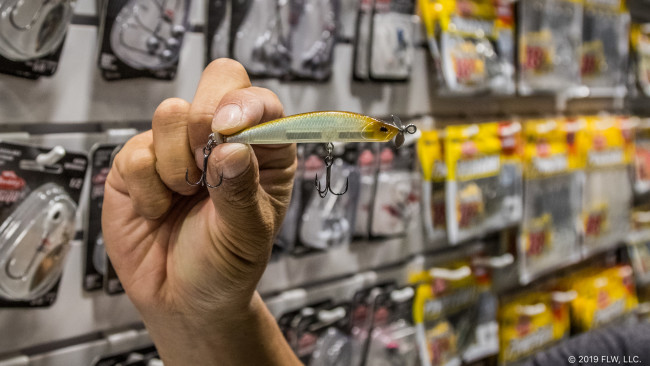 Options for a “standard” and slow-sink version are available in the new Berkley SPY Spinbait. Color schemes are top-knotch, which is important for this finesse technique, and Berkley created a bait that casts well and tracks straight. It’s just another solid option for a popular bait category. $9.99 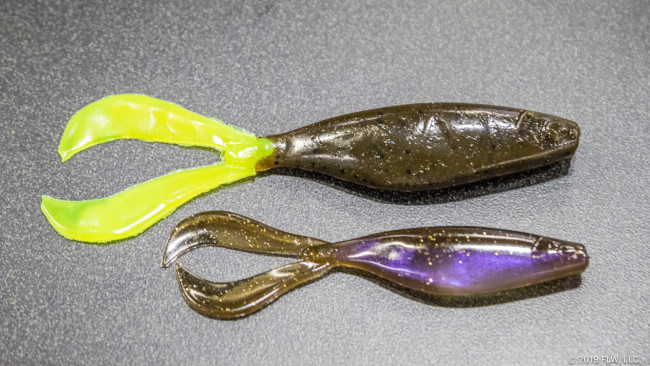 How no one else ever created a bait called “The Deal” is a mystery, but here is a brand-new soft-bait offering from Berkley’s PowerBait lineup. The Dealis designed to be a vibrating jig trailer, but it’d work great on a swim jig or possibly as a soft jerkbait. Two ribbon-like tails are stacked on the back of the bait to create a realistic tailfin profile and action. The body has a very fishy profile as well, with a split belly for hook penetration and a solid head to make it easy to rig as a trailer. Price is $4.99 per pack. 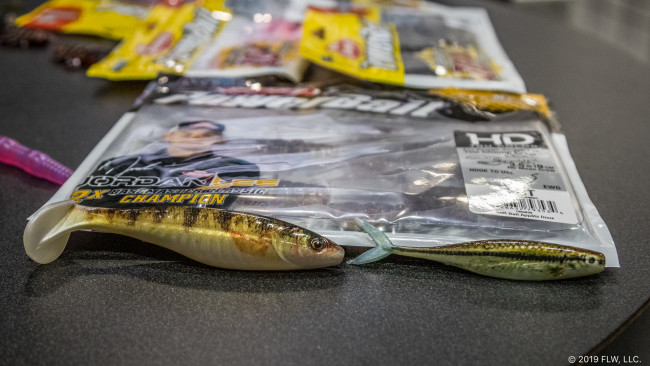 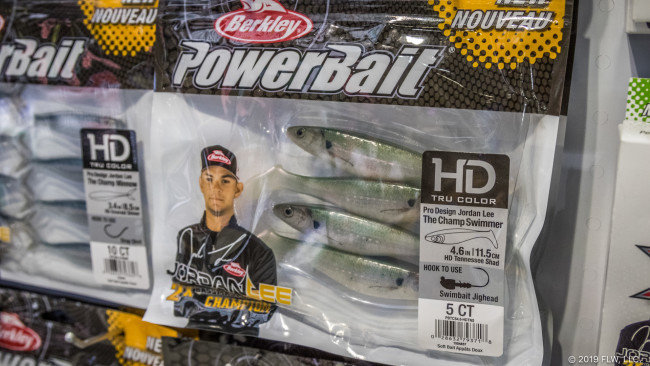 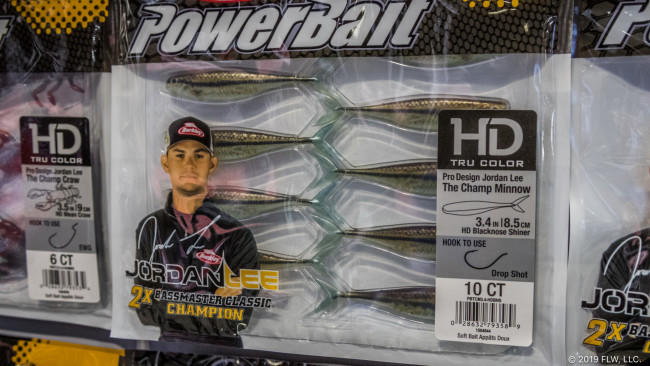 Check back for details on more new baits from ICAST. Or comment below about which companies you’d like to hear from.