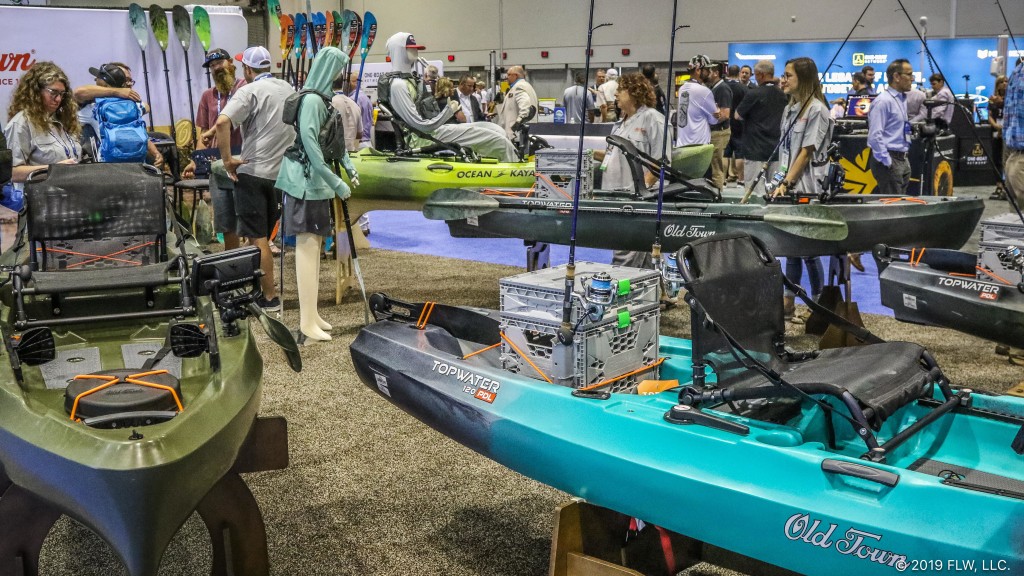 Such is the massive surge in innovation in the fishing kayak industry, as evidenced by a showroom floor packed with canoes, kayaks, boats – and, in many cases, a combination of all of them – at ICAST 2019.

The point is this: The entire small boat market is an ever-growing, nebulous wave of innovation, driven by designers who collectively want to make sure there isn’t a single niche left unfilled. As we saw this year at ICAST, the market may have finally reached that point. 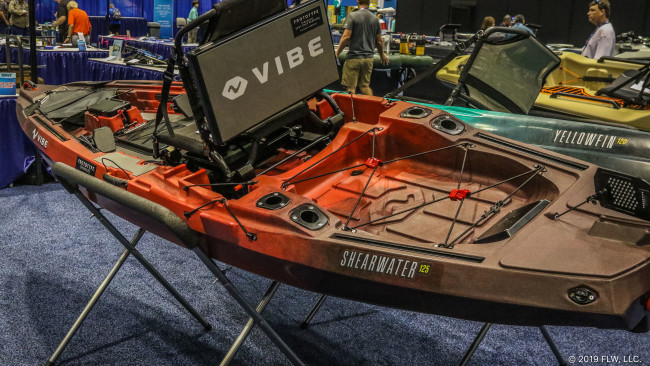 There’s still an abundance of options on the fishing kayak market that don’t include a crazy amount of bells and whistles. If you just want a sturdy, well-built boat you can strap on top of your SUV or toss in the back of your truck, they’re definitely out there. Jackson, Bonafide, Hobie, Perception, Old Town and dozens of other kayak companies have baseline options at varying price points.

The options are nearly endless right now, and it’s easy to understand why so many companies have gotten into the fishing kayak game. No two anglers have the same needs, and when the only barrier to customizability is imagination, the market really opens up. 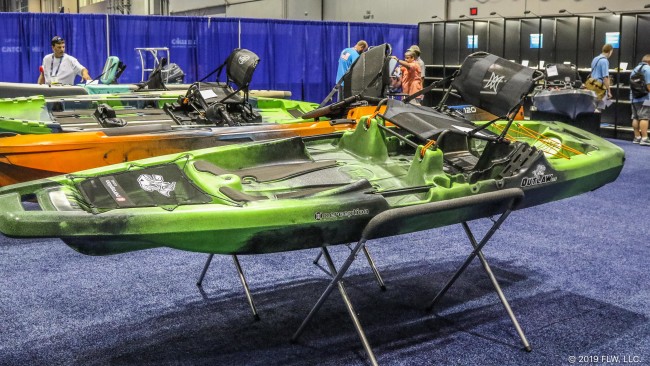 The ICAST showroom floor this year was certainly packed with baseline options. The Perception Outlaw 11.5 (By Wilderness Systems) was particularly intriguing, in part because of the price tag. With an MSRP of $649, there are few fishing kayaks on the market that boast its features and affordability. It’s wide (and looks fairly stable) with a solid mounted seat and a deck with tons of room for gear.

Jackson Kayak is right there as well with the Bite, which retails at $799. It’s not new to their 2019 lineup, but as far as affordability and customizability go, it’s a stellar option that we’ve already reviewed.

Similarly, Vibe is a fairly new company on the fishing kayak scene, and they rolled out a ton of sub-$1,000 options at ICAST. Built on the idea that customizability is the biggest selling point for any fishing kayak, each one on display this week had a perfect blend of readymade upgrades and the ability to add on other features with relative ease. 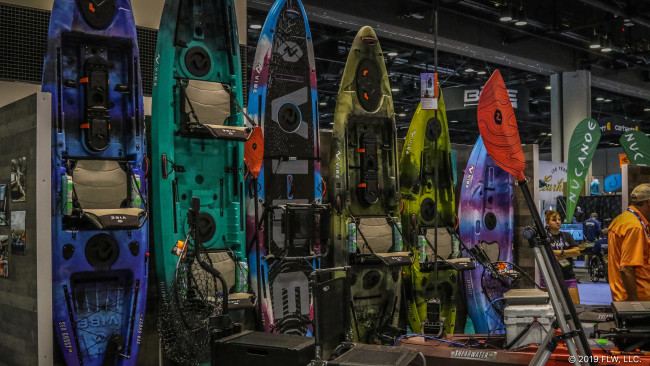 The list goes on, but the point is this: Regardless of how big the market is getting, there are always going to be affordable options for baseline fishing kayaks, and the features only continue to get better. 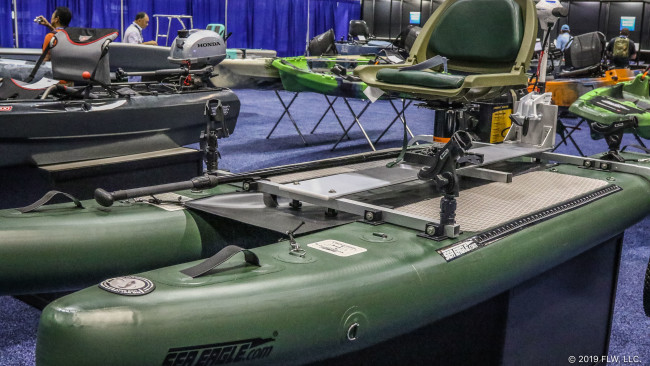 With the way bass boats have evolved through the years – bigger, faster and more user-friendly – it should come as no surprise that the same would happen to the fishing kayak market. Yes, the general idea of fishing kayaks is that they’re cheaper, easy to transport and in some ways easier to use than a bass boat, but that isn’t going to stop kayak designers from thinking up ways to pack as many features into their kayaks as possible. 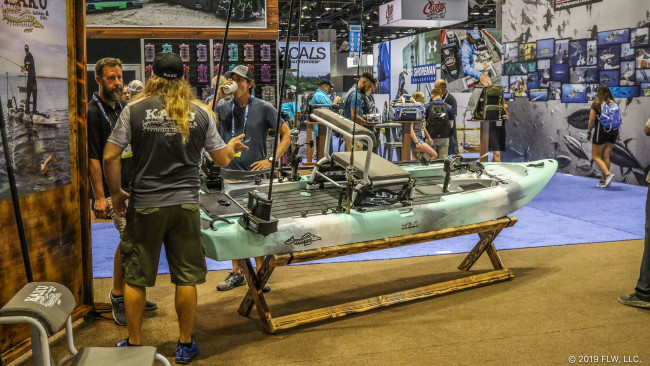 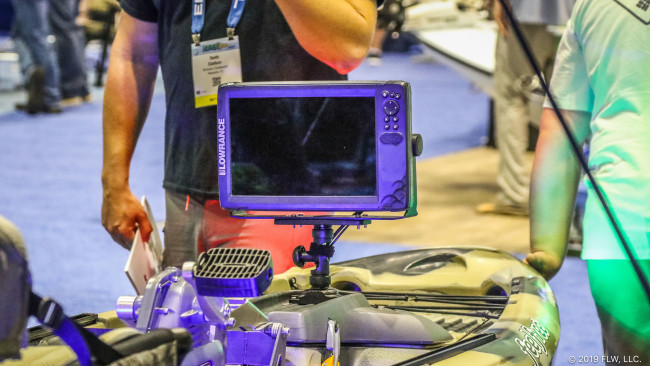 Even the high-end kayaks on the market – the ones with micro Power-Poles and massive Lowrance screens and electric motors – come in way, way below the typical cost of even a moderately priced new bass boat. So, in that sense, it’s easy to understand the broad appeal of Hobie pushing the $5,000 mark with some of their higher-end models. 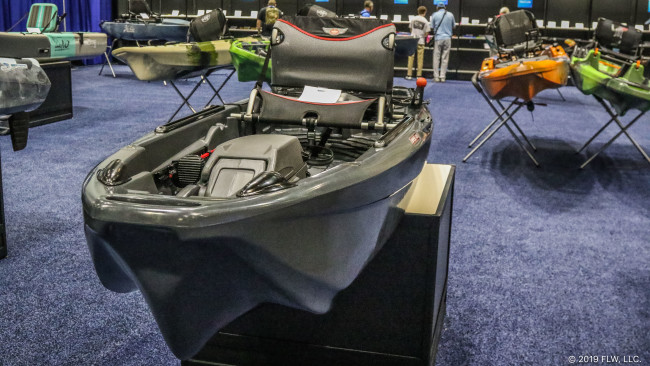 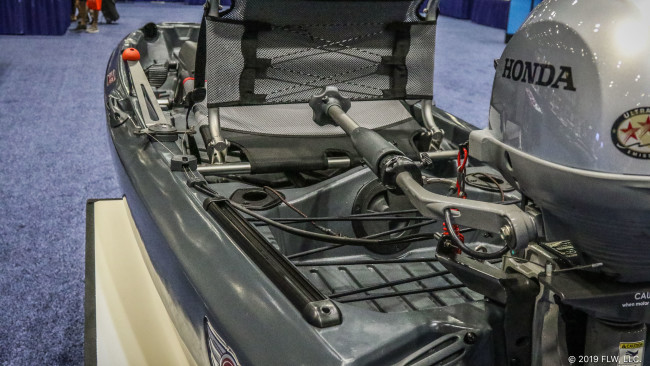 And then there’s the kayaks that maybe can’t even be called kayaks at a certain point, like the Jonny Boats Bass 100. It’s an amalgamation of a kayak and a Jon boat, and it retails at just $899 without any big upgrades. Toss in an outboard and other accessories, and you’re left with a $2,000 boat, like the one pictured above. And given how much more compact the Bass 100 is than a standard Jon boat, it’s really an intriguing product. 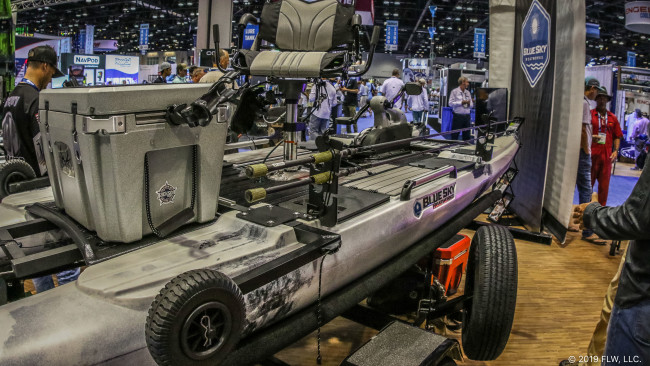 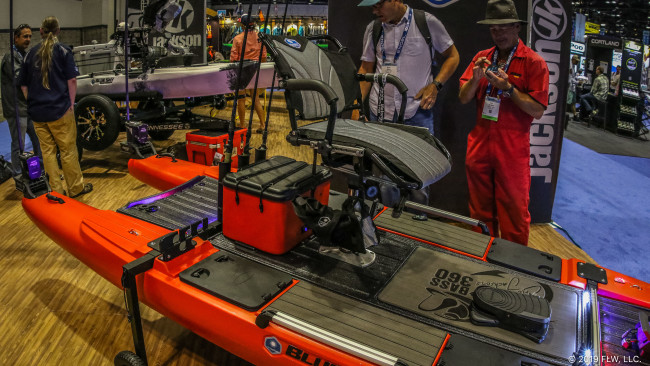 Consider also the dual-hull designs of Blue Sky Boatworks, which boast the comfort of a bass boat with the stealth of a kayak. The same goes for the Sea Eagle SUPcat10 inflatable boat with a similar design that retails for $1,399. Both styles are decidedly not traditional fishing kayaks, but they’re finding a place in the market.

In talking with industry professionals at ICAST, I heard a lot of the same question, in various forms: “What’s the point of having a kayak if it needs a trailer and an outboard? Why not just buy a small fishing boat?”

It’s a fair question, but there’s a reason these new products exist in the first place — there’s a market for them.

To each his or her own. That’s probably as close as you’ll get to an official motto for the current fishing kayak industry. Massive $70,000 bass boats don’t work for everyone. Nor do basic 10-foot sit-on-top kayaks. Or Jon boats with 5-horsepower outboards. There isn’t a one-size-fits-all boat out there, and there never will be. 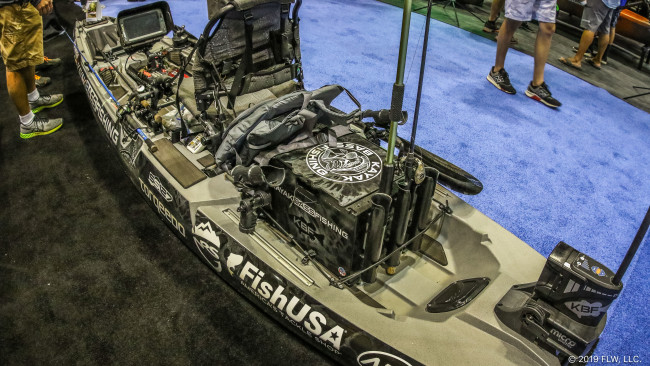 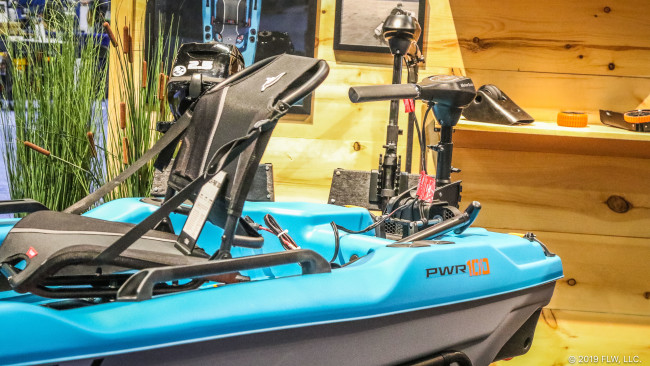 It’s hard to say where the fishing kayak industry will turn next. Innovation begets innovation, and there’s been plenty of it in the last few years. Pedal drives were all the rage just a few years ago, and almost every company is working on offering a model that comes standard with some form of pedal drive.

Electric motors and even combustion outboards seem to be poised to flood the market now as well. Every company is working to pack features and customizability into their products, not to mention all the companies that specialize in aftermarket upgrades that work across multiple brands. Gone are the days of gluing transducers in hulls and trying to find room for a massive battery to power electronics. Multiple companies now offer compact power stations that combine electronics, batteries and transducer mounting options in one package.

Size (and this will come as no surprise to bass boat owners) is king, and kayaks seem to be getting bigger and bigger. Yet, at some point, there’s again going to be demand for small boats with more stability and more options. It’s a self-correcting market.

So, the answer to the above question is probably out there somewhere, but I don’t have it. It’s safe to say, though, that the fishing kayak industry hasn’t even begun to peak yet. And with demand higher than it’s ever been before, you can count on some brilliant minds to figure out exactly what is next and make it a reality sooner than later.