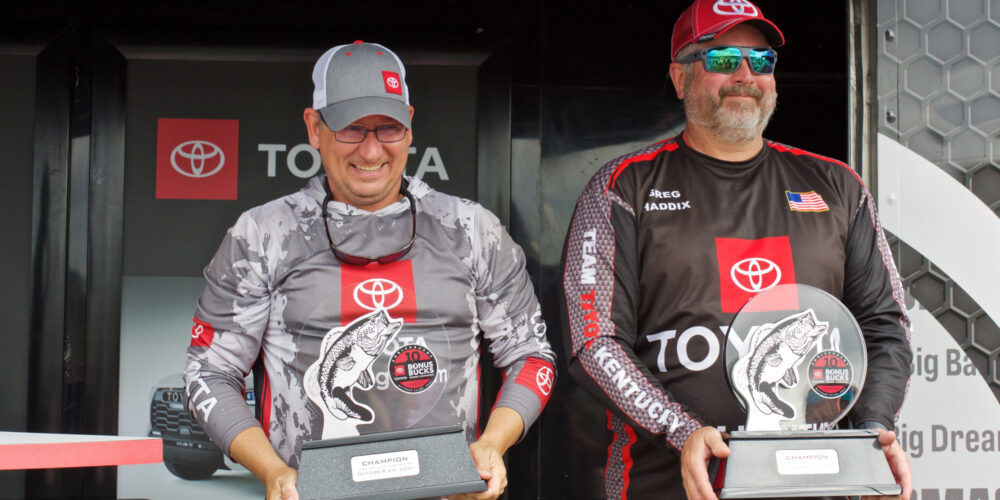 Greg Haddix and Kevin Willoughby won the Toyota Bonus Bucks event with a crankbait given to them by a co-worker.
November 1, 2021 • Luke Stoner • Industry News

Along with no entry fee, great food, and all the cool free clothing that is given out to competitors at the annual Toyota Bonus Bucks Owners event, the fellowship and camaraderie is top-notch, too. And the fact this year’s late-October tournament was won by Greg Haddix and Kevin Willoughby with a crankbait given to them by co-worker Roy Byrd exemplifies that.

Haddix, Willoughby and Byrd have dedicated most of their adult lives to building Toyota Camrys and Corollas with zero defects for optimal customer satisfaction at Toyota Manufacturing plants in Kentucky and Mississippi.

But on the weekend, they fish with equal passion and dedication.

“Even though we were fishing against Roy today, he was kind enough to give us some of his new Byrd Custom Crankbaits yesterday, and they ended up being key to us winning today,” says Willoughby.

Fishing on Table Rock proved brutally tough amid winds that gust to 40 mph on tournament day, and their winning weight of 14 pounds 1 ounce proved dominant as a result of calling an audible to fish in the back of a creek instead of battling waves on the main lake points they fished in practice.

Also impressive regarding the generosity of Toyota was their pledge to donate 10 times the winning weight to conservation. So, $1,410 was given from Toyota to the Johnny Morris’ Wonders of Wildlife Foundation for a future fisheries-related project on Table Rock Lake.

The top-30 places all got a paycheck at the no-entry-fee event, and even the first place ‘out of the money’ got $1,000 from Yamaha. Thomas Huckabee picked up a $1,000 Bass Pro Shops gift certificate, Kevin Adcox won $300 and two pair of Costa sunglasses for finishing 10th, and the big bass of 4 pounds, 6 ounces was good enough for $1,000 in Carhartt gear.

But greater than any prize is the value of fellowship experienced at this annual event.

And this year’s winners would be among the first to stand and testify to that, as a co-worker’s crankbait led them to $5,000 and memories for a lifetime.