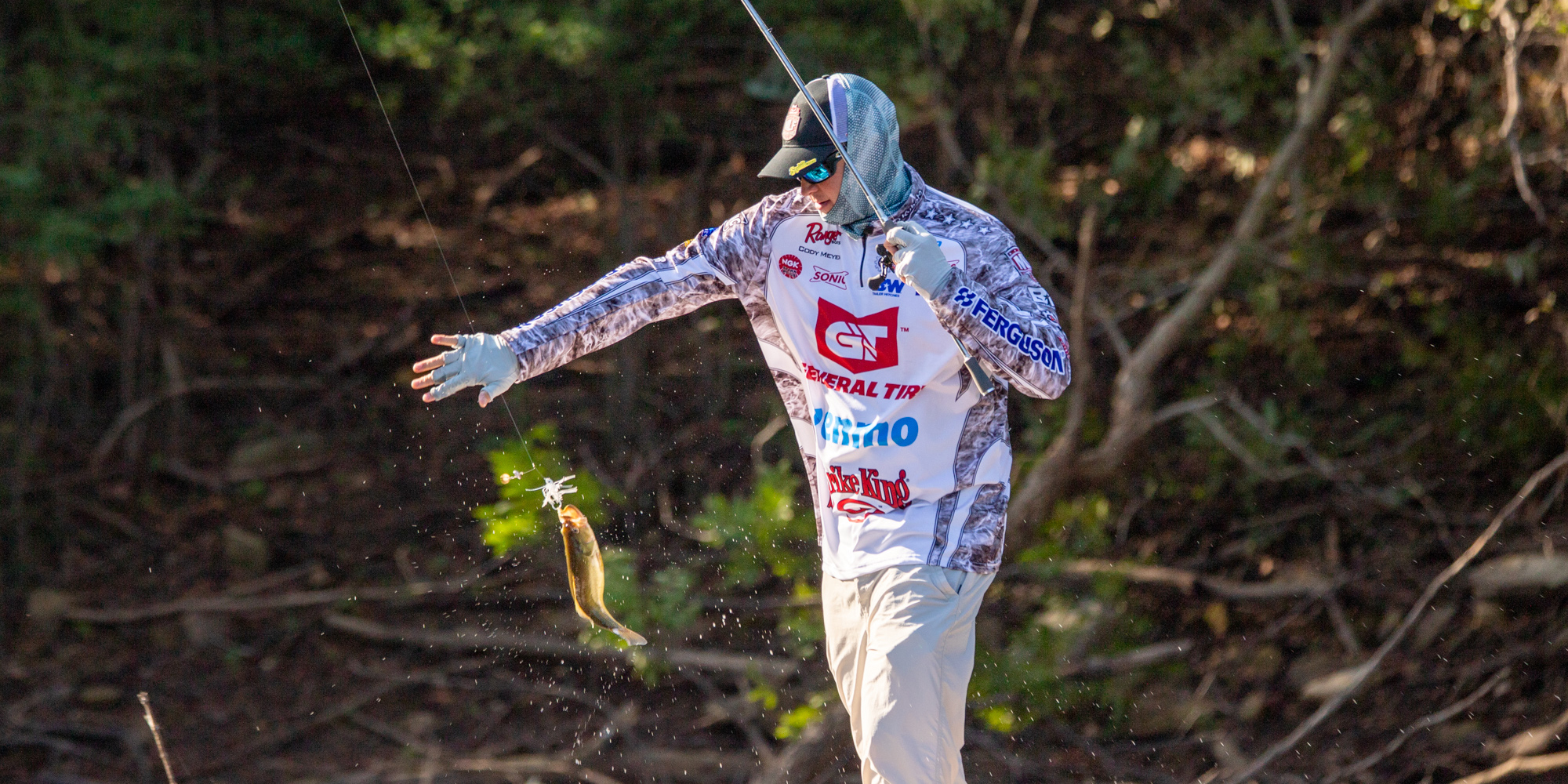 Cody Meyer was the first to reach the 14-pound Target Weight during the Patriot Cup Sudden Death Round 2. Photo by Joe Branch

MUSKOGEE, Okla. – Sudden Death Round 2 of Sqwincher Patriot Cup Presented by Venmo sent nine anglers to Fort Gibson Lake with a goal to end up in the Top 4 and claim an advancement to the Championship Round.

Like the first group, the anglers in Round 2 were given a Target Weight of 14-pounds. The first of four anglers to reach the weight goal and move on to the Championship Round was Cody Meyer, who did so with a flurry to close out Period 1. Brent Chapman was the next angler to advance, followed by Jordan Lee and Aaron Martens.

During the Elimination Round, California’s Cody Meyer discovered a spinnerbait pattern on isolated bushes and finished second for the round. During the Sudden Death Round, he exploited the same targets and quickly advanced to the Championship Round.

“We were still on Fort Gibson but in a completely different zone. I took a look at my map and focused on the back of one creek that looked really good,” Meyer said. “There was a long no wake zone and it started to seem like it would be a huge waste of time.”

The back of the creek didn’t pan out for Meyer, but it got him close to his eventual winning location as he idled out of the no-wake zone and came across what he called “a little creek within a big creek” that was full of life.

“There was fresh runoff coming through it and it was full of bait. There were bass everywhere and they were around the shade in flooded bushes that were 4 to 5 feet of water,” Meyer recalled. “But the bass were in the top 2 feet of the water column. That made it perfect for a spinnerbait.”

He caught all of his nine bass for 15-10 on the same spinnerbait that got him to this point in the event, a 1/4-ounce white Strike King spinnerbait.

“I used the same exact setup as I did in the Elimination Round, a 7-foot medium/medium-heavy Daiwa Tatula Elite Brent Ehrler Finesse rod with a 6.3:1 Daiwa Tatula SV,” Meyer shared and added that he spooled it with 15-pound fluorocarbon line.

Chapman Spinnerbaits His Way to Second

Like Meyer, Brent Chapman moved through the Elimination Round with the help of the spinnerbait. He won his round mainly because he stuck with one of his go-to fall baits, a 1/2-ounce chartreuse and white Trophy Bass Company spinnerbait with an Eagle Claw trailer hook attached.

Chapman says he always gravitates towards confidence lures when fishing new water and during the fall months. Often that means a spinnerbait as he can quickly cover water. On Fort Gibson, the key was finding isolated cover.

“Bass are an ‘edge species,’ and even on isolated flooded bushes, I like to target the edges of the cover. The lake was flooded with tons of bushes and logs in the water, so finding the more isolated cover was the key to finding the fish,” Chapman said.