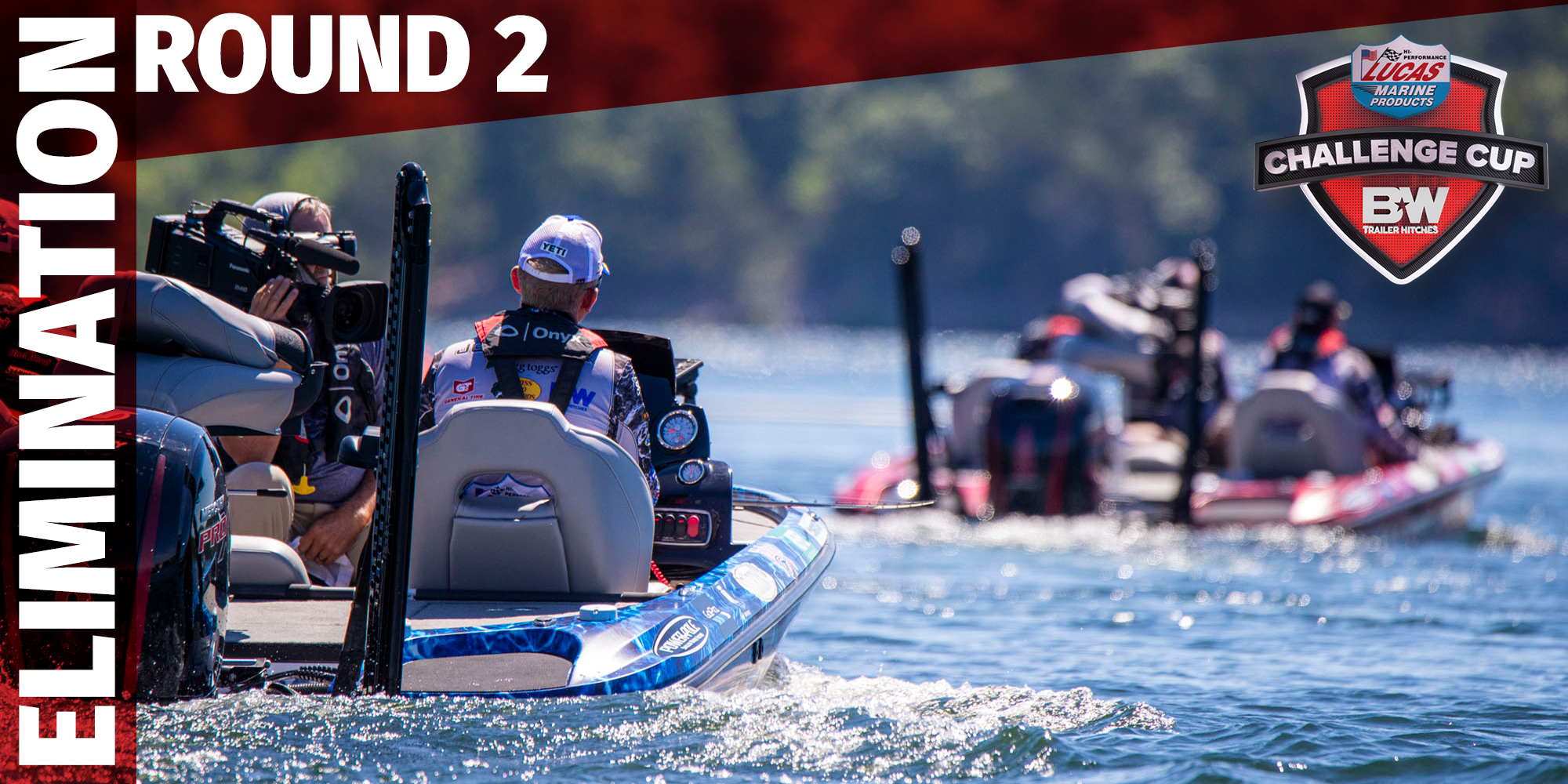 The second group of 10 MLF pros cruise onto Bull Shoals in Mountain Home, Arkansas for Elimination Round 2. Photo by Josh Gassmann

In Elimination Round 1 of the 2020 Lucas Oil Challenge Cup Presented by B&W Trailer Hitches, we saw six anglers move on while four were sent home in what seemed to be a tamed version of Elimination Line drama. Sixth-place finisher David Walker edged out seventh-place Gerald Spohrer by more than 6 pounds. As 10 more anglers prepare to get their first whacks at Bull Shoals Lake in Mountain Home, Arkansas, expect a much more stressful affair for those hovering around the Elimination Line.

The flooded conditions we saw in Elimination Round 1 will certainly continue in Elimination Round 2, with water levels 25 feet above normal. Because of that high water, MLF NOW! analyst Marty Stone expects a lot of anglers to focus on the newly flooded shoreline brush, grass and trees for relocating bass. A stiff north wind should cause the 10 pros to make some adjustments with their strategy as well. Stone predicts that the wind will impact which types of baits and the locations the anglers choose to fish.

“Wind and clouds are your best friend on clear water lakes like Bull Shoals,” Stone explained. “That wind breaks up the surface allowing those fish to hide and ambush their prey more effectively. That wind should push those fish up more shallow towards the banks, making it easier for these guys to find them.”

Where Should the Fish Be?

Jeff Sprague put on a buzzbait clinic in Elimination Round 1 working around the flooded brush and trees. Stone predicts that we will see the anglers focus on those flooded areas once again with the occasional pro looking for an offshore school. As Stone pointed out last week, when the waters rise, the bass usually come with it.

Mark Davis is the lone Arkansas angler competing in this round of the 2020 Challenge Cup. The Arkansas native calls Mount Ida home, about 200 miles from the shores of Bull Shoals Lake. Davis has plenty of experience with Ozark lakes with a win at Table Rock Lake in 2004 and two second-place finishes (2014 Table Rock Lake, 2017 Lake Dardanelle).

“I have a lot of history in the Ozarks and we just got done fishing Table Rock Lake so I’m feeling pretty good,” Hite said. “I know that the water is high so I kind of know what stage the fish are in and where they will probably be.”

Both Hite and Connell will need to be at their best if they want to beat out experienced MLF Cup anglers like Mike Iaconelli (a two-time MLF Cup Champion) and Greg Hackney (the 2018 General Tire World Champion).