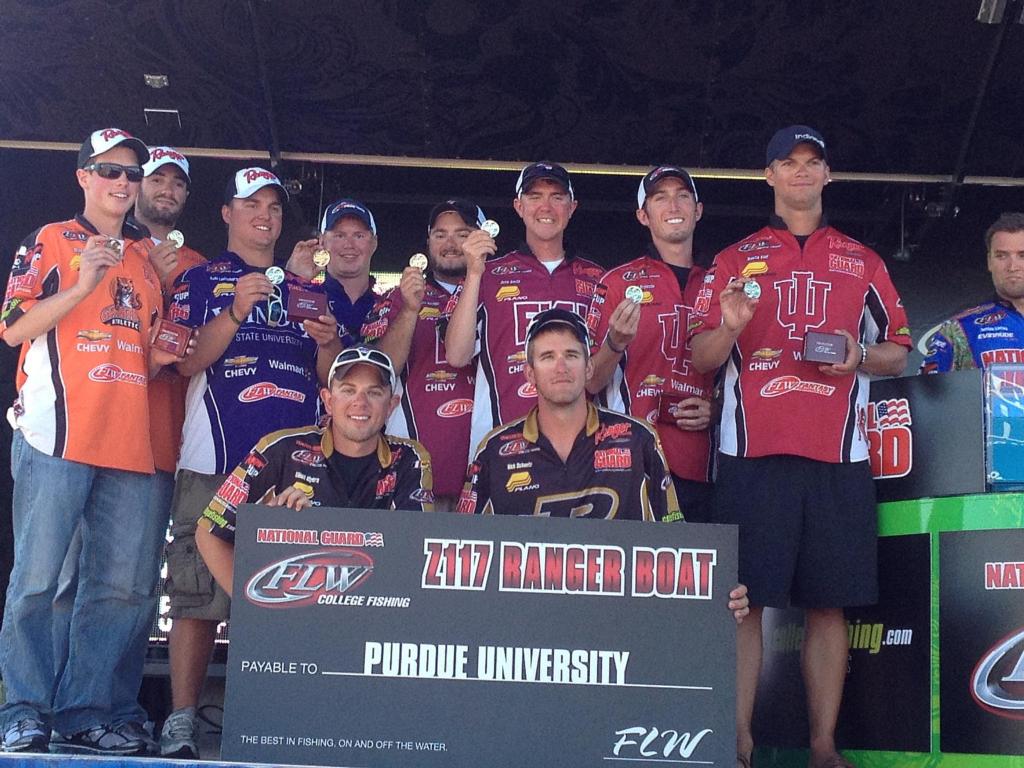 “I did a good job netting,” joked Schuetz, a recent graduate in electrical engineering. “I didn’t know what to do; Elliott was putting on a show today. I was netting and fighting the wind and the trolling motor all day. I could have put my rod down and it wouldn’t have mattered.”

Indicating that they fished the same area throughout the tournament the team was targeting wood today unlike Thursday and Friday when they were targeting grass. According to Schuetz the cold front that ran through last night kept the bass near the heat of the wood. He also said that being able to make adjustments each day was key to their success.

Sharing the same water with Winona State all week the Purdue team said the separator today was their patience. According to Schuetz Winona left the area early while they (Purdue) toughed it out. They slowed down their fishing and just kept pitching wood all day long.

“We probably aren’t the best fisherman out there,” Schuetz went on to say. “But we were able to find the fish and any time you find the fish it’s a score. After we qualified for the Central Conference Championship both Elliott and I spent as much time as we could practicing here and we knew where they were not! Being able to do that really helped us eliminate water and focus on other more productive areas.”

The team beat their closest competitor, Winamac/Decatur Central High School out of Indiana by 2 pounds, 9 ounces. They were the only two teams to catch five bass limits.

After having what was described as a really lousy pre-practice on Friday, the team was extremely jubilant with their victory today.

“We went out there today not expecting much and doing something completely different than we did yesterday,” Marsh said. “And it all just clicked; we stayed focused and were lucky it worked out.”

The team said they were fishing the same areas as Eastern Kentucky and Indiana University for most of the day. They were targeting deep grass with ChatterBaits and Texas rig centipedes. According to Boe the team had six keepers all day and went from 8:30 a.m. to 2:30 p.m. without catching a keeper, “it was nerve wracking”.

“I am speechless, Boe said. “This has been an incredible experience with TBF and FLW giving us this opportunity to fish these tournaments.”