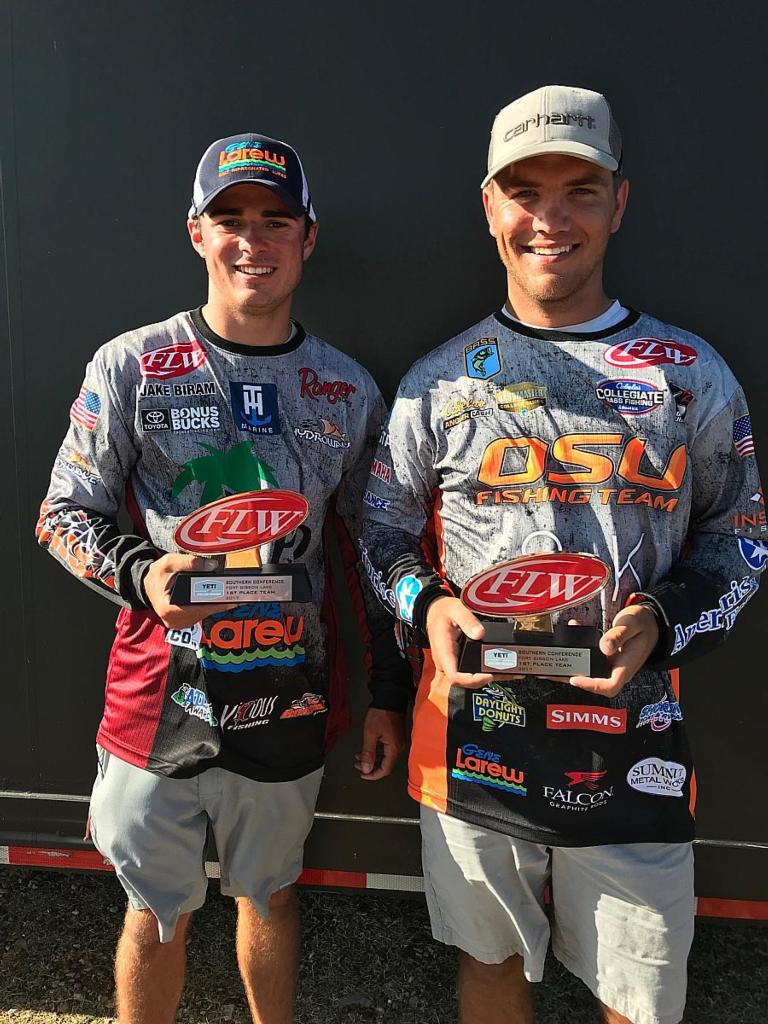 WAGONER, Okla. – The Oklahoma State University duo of Rhett Meyer of Stillwater, Oklahoma, and Jake Biram of Tulsa, Oklahoma, won the YETI FLW College Fishing Southern Conference tournament at Fort Gibson Lake Saturday with a five-bass limit weighing 16 pounds, 7 ounces. The victory earned the Cowboys bass club $2,400 and the team will now advance to compete at the 2018 FLW College Fishing National Championship, scheduled for May 30-June 2 on the Red River in Shreveport, Louisiana.

“We fished in the mid-lake area for most of the day, from the Highway 51 Bridge up to Whitehorn Cove Marina,” said Biram, a sophomore marketing major. “It was really windy, so we just tried to play to the conditions and we fished every shallow wind-blown point that we could find. We probably hit around 10 to 12 different points throughout the day.”

“We caught a lot of sand bass and drums, but we just had to weed through those to get the bass,” said Meyer, a sophomore majoring in agricultural business. “We only had five keeper bites all day.”

The duo started their morning throwing squarebill crankbaits and topwater baits, but quickly switched to (ghost-shad) Bill Lewis Rat-L-Traps after boating a couple of early keepers.

“I think the key for us was the Rat-L-Trap,” Meyer said. “We threw the squarebill a lot, but we were not getting any bites. The Rat-L-Trap was getting down deep enough to get us the bites.”

“Fishing slow was important,” Biram added. “We had to be methodical, but also make sure we were staying on the move to be in the right place at the right time. It was an awesome day.”