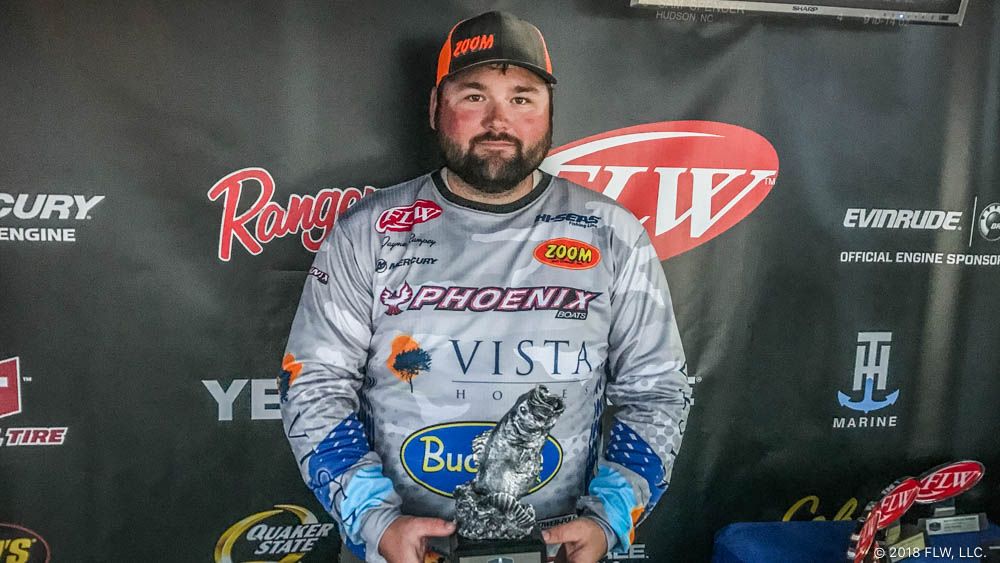 Rampey said he utilized much of the lake, from the boat ramp down to the dam, to catch his fish. He said his goal was to stay mobile throwing his super-light 6-pound-test Hi-Seas 100% Fluorocarbon line.

“I pretty much fished ditches all day. We’ve had a lot of rain and new freshwater coming in, and the herring were in the ditches,” said Rampey, who earned his eighth career win in BFL competition – his fourth in the past year. “A lot of the lake was blown out so I looked for water that was just a little off-color. I stayed mobile – I didn’t get want to get hung up on anything.”

Rampey said his he employed a one-two punch of baits in the morning – a Buckeye Lures Su-Spin Blade with a white Zoom Super Fluke Jr. and a Buckeye Lures G-Man Finesse Swimbait Jighead with the same

Zoom fluke as a trailer. He said he also worked in a jerkbait after the wind picked up later in the day.

“I caught about 10 keepers throughout the event, with two of my biggest coming on the finesse jighead,” said Rampey.

Coy Watts of Conway, South Carolina, caught a bass weighing 6 pounds, 1 ounce – the heaviest of the event in the Boater Division – and earned the day’s Boater Big Bass award of $690.

Jeremy Winn of Seneca, South Carolina, caught the largest bass in the Co-angler Division – a 4-pound, 1-ounce fish. The catch earned him the day’s Co-angler Big Bass award of $345.