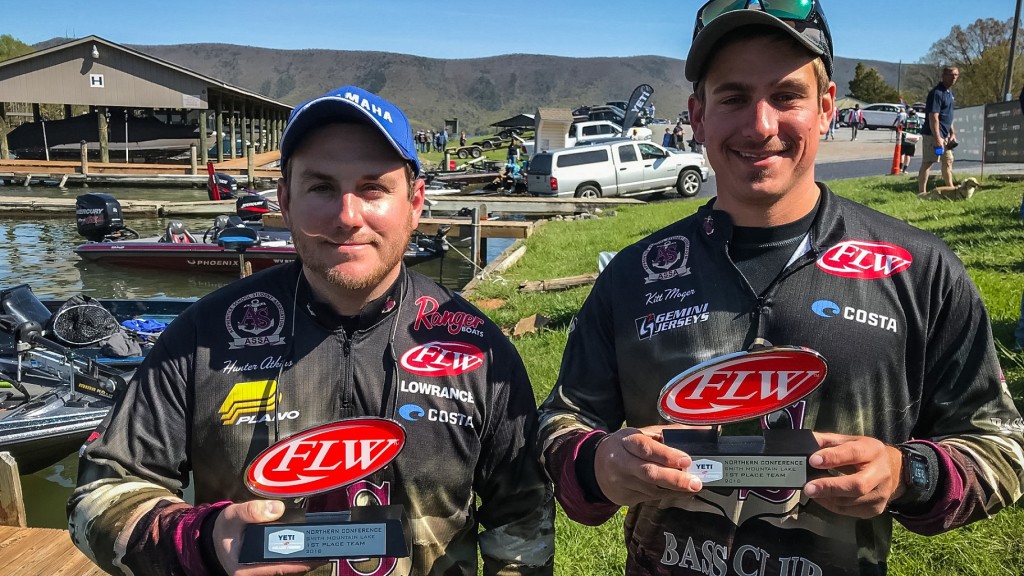 “We knew we had a pretty good limit, but we figured some of the other teams likely would as well, so we were surprised to get the win so convincingly,” said Moger, a sophomore angler.

Moger said that the duo spent their day on the water sight-fishing for bass that they had marked on beds during their practice session Friday.

“It started Friday afternoon – we noticed a few fish were literally just moving up on the beds,” Moger said. “We spent the rest of our afternoon running around and marking fish on beds that looked catchable. We had probably 8 to 10 marks saved for the tournament, then around 6 o’clock that evening we came upon a 7-pounder. We knew that was where we were going to start our tournament day.

“On Saturday, we launched our boat, attended the takeoff ceremony, and immediately ran up to the Roanoke end of the lake, back to the 7-pounder. It took about an hour and a half of work to get her to bite, but we got her.”

“When we are sight-fishing, we both stand side-by-side on the front deck and take turns casting right after each other,” said Atkins, a junior majoring in business. “It’s a very fast-paced style and it seemed to get the fish aggravated more quickly.”

The duo said that they were able to put about a half-dozen of their marks they had in the boat, and managed to find a few new fish on beds as the day went on. All 10 of the keepers that the team caught throughout the day came sight-fishing with a Texas-rigged black and blue-colored plastic craw.

“The key was determining which fish to spend the time on to catch,” Moger went on to say. “Some of the bass were extremely skittish and you could quickly tell that they were a lost cause. I think the majority of the teams were fishing reaction-type baits, or around docks with Yamamoto Senkos. But, the key were finding those fish on beds and targeting the right ones.”

The top 10 teams on Smith Mountain Lake that advanced to the 2019 College Fishing National Championship are: