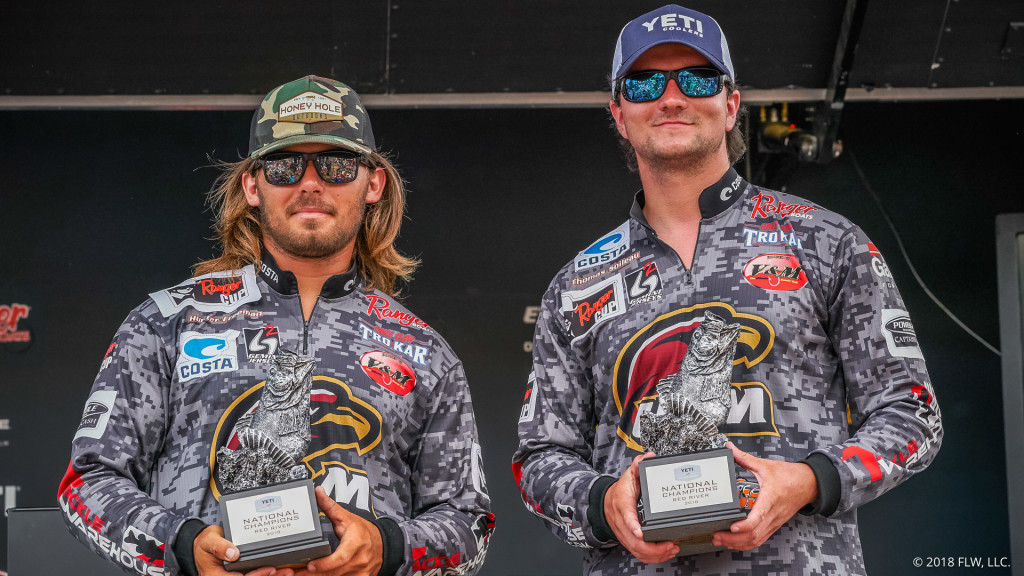 SHREVEPORT, La. – The University of Louisiana-Monroe (ULM) duo of Thomas Soileau and Hunter Freeman, both of Monroe, Louisiana, weighed a five-bass limit Friday totaling 15 pounds, 13 ounces – the largest limit weighed in the three-day tournament – to win the 2018 YETI FLW College Fishing National Championship on the Red River presented by Lowrance C-MAP Genesis. The Warhawk duo led the event wire-to-wire, and their three-day total of 15 bass for 42-8 gave them the win by a 7-pound, 6-ounce margin – the largest margin of victory in FLW College Fishing Championship history. Cody Huff and Garrett Enders from Tennessee’s Bethel University finished second with 15 bass for 35-2.

“I had confidence coming into the event that we were going to do well, but if you had told me we were going to lead for three straight days and then win I would have told you that you were crazy,” said Freeman, a junior majoring in business administration. “This is pretty special. The Red River has been good to us this week and I can’t ask for any more.”

“This is unreal,” said Soileau, a recent criminal justice graduate. “Today started off really slow and we kind of got down on ourselves. We only had three fish for five pounds around 11 (a.m.), so we had to scramble and went to a spot that we hadn’t hit all week and it paid off. We caught three solid fish off of it and that put us right up around 15 pounds.”

The ULM team caught the majority of their fish this week targeting bass in the mouths of creeks and bays on the south end of Pool No. 4. They said that their key baits were a chartreuse and black-colored Black Label Tackle Cliff Pace Ricochet Crankbait, a Carolina-rigged California 420-colored Zoom Brush Hog, a jig with a Strike King Rage Craw and a Yamamoto Senko with a spinner blade on it – a bait they called a ‘hootenanny’.

The Warhawk team will now advance to compete in a one-day fish-off on Saturday against each other in the marina bay of the Red River South Marina in Bossier City. The two anglers will weigh in Saturday at 3:50 p.m. prior to the final weigh in of the T-H Marine FLW Bass Fishing League (BFL) All-American championship at Cross Lake. The winner will receive entry into the 2018 Forrest Wood Cup, the world championship of bass fishing, held August 10-12 on Lake Ouachita in Hot Springs, Arkansas.

“We work really well together as a team, and he’s the one that usually makes the calls so it’s going to be tough to beat Hunter,” said Soileau. “But, I’m not giving up and I’m going to give it all that I have got. I definitely would love to fish in the Forrest Wood Cup. We’ve fished against each other in some small tournaments, but never with anything like this on the line. All I know is that it’s going to be fun, and I can’t wait to go fishing tomorrow.”

“Thomas is a really good angler and he’s the perfect partner to have in the boat, which is why we work so well together,” Freeman went on to say. “We put our time in and really deserved to win his event. Now, tomorrow, it’s just going fishing – just another tournament. We’ll go fishing tomorrow and see how it all shakes out.”

The top 10 teams on the Red River finished:

The 2018 YETI FLW College Fishing National Championship presented by Lowrance C-MAP Genesis on the Red River was hosted by the Shreveport-Bossier Sports Commission & Red River Waterway Commission and featured 168 of the top college bass fishing clubs from across the nation competing for the top prize of $30,000, including a new Ranger Z175 boat with a 90-horsepower Mercury or Evinrude outboard.

Television coverage of the YETI FLW College Fishing National Championship presented by Lowrance C-MAP Genesis will premiere in high-definition (HD) on NBC Sports Network (NBCSN) Aug. 15 from Noon -1 p.m. EDT. The Emmy-nominated "FLW" television show airs on NBCSN, the Pursuit Channel and the World Fishing Network and is broadcast to more than 564 million households worldwide, making it the most widely distributed weekly outdoors-sports television show in the world.