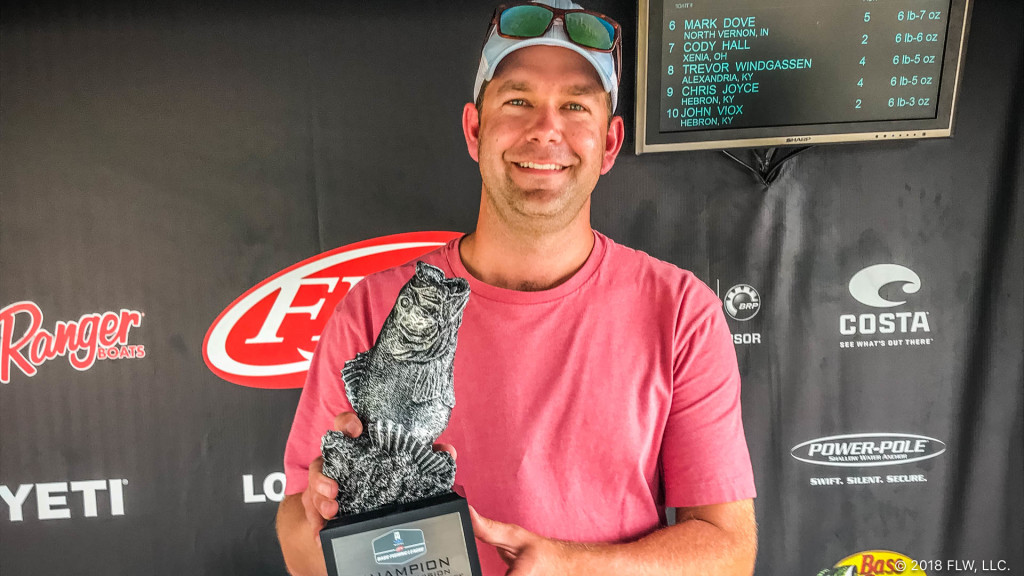 “We got a lot of rain leading up to the tournament, which muddied the water and brought the water levels up,” said Hock, who earned his first career win in BFL competition. “I ended up finding clearer water, and that was the ticket.”

Hock said most of the field ran to the lower end in search of clear water, but equipment limitations forced him to stay upriver.

“It’s shallower upriver and it muddies up a lot more than the steadier water down at the lower end, which is pretty typical for most impoundments,” said Hock. “I was fishing in an aluminum boat with a 60-horsepower motor and didn’t have the fuel capacity or the speed to make the 30-minute run down there. I knew there were a couple good creeks just up from Tanner’s Creek, so I went to what I could get to.”

Around 7:30 a.m. Hock caught a 3-pounder on a white buzzbait. As the morning progressed, Hock left his area to look for cleaner water upriver, but ended up returning.

“My co-angler caught a 4-pounder and we talked to another boat who lost another 4 (pounder) in the area. Those size fish aren’t that common on the Ohio River,” said Hock. “Knowing how clean the water was and realizing that those fish were there, we decided to stay and grind it out.”

Hock said he started out with the buzzbait, but ended up switching to a Texas-rigged green-pumpkin-colored Zoom Ultra Vibe Speed Craw on 20-pound-test line. He ended up weighing four fish on the craw.

“I had more bites with the buzzbait, but they weren’t committing to it. I knew fish were there, but I just had to slow down and flip,” said Hock. “I fished wood, flooded grass and rocky banks. They weren’t on anything specific. I just knew they were in the area and I picked everything apart.”

Viox brought a bass to the scale weighing 5 pounds even – the heaviest of the event in the Boater Division – and earned the day’s Boater Big Bass award of $540.

Wilkens also caught the largest bass in the Co-angler Division weighing in at 4 pounds, 11 ounces. The catch earned him the day’s Co-angler Big Bass award of $270.