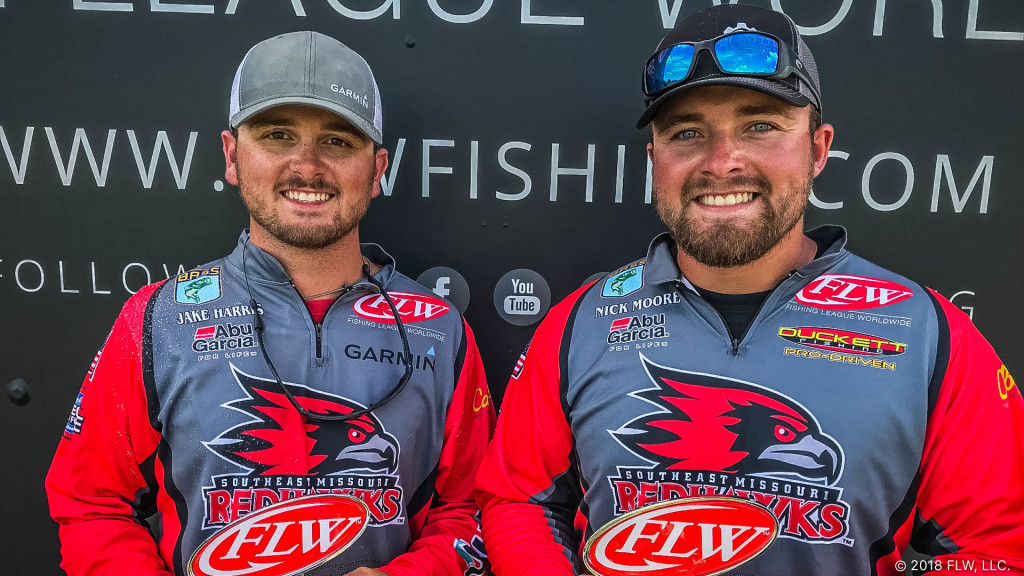 Moore said that he and Harris, a junior majoring in business, spent their day fishing a 100-yard stretch on the lower end of Pool No. 4 between the main-river channel and Peterson Lake.

“We found the spot within the last hour of practice,” said Moore, a junior majoring in agribusiness and plant and soil science. “I had made a cast on the stretch and missed a fish, but when Jake fired out there, he hooked one. As he brought it to the boat, there were nine or 10 bass with it and they were all quality-sized largemouth.

“Saturday morning started off slow. We probably caught around a half-dozen short fish and a few pike before getting our first keeper bass around 8 (a.m.),” Moore continued. “From there, we figured out our cadence and everything kind of came together. Our first five fish had us up to 16 or 17 pounds, and we culled twice. We had everything we weighed by 10 (a.m.) – it was a crazy two hours.”

Moore said that a couple of 4-pound bites were likely what sealed the deal for the team.

“The area had duckweed mixed with some hydrilla and there were lilypads spread throughout it,” said Moore. “It wasn’t a lilypad field, but there were little groups here and there. The matted duckweed rerouted the current, which was definitely the reason there was more bait there. We could see bait around the edges of the duckweed and the groups of pads seemed to hold the better quality fish.”

“It was our first win as a college club in a major event. We were quick to be congratulated by our teammates, alumni and even anglers from other schools. It was an awesome experience,” Moore went on to say.