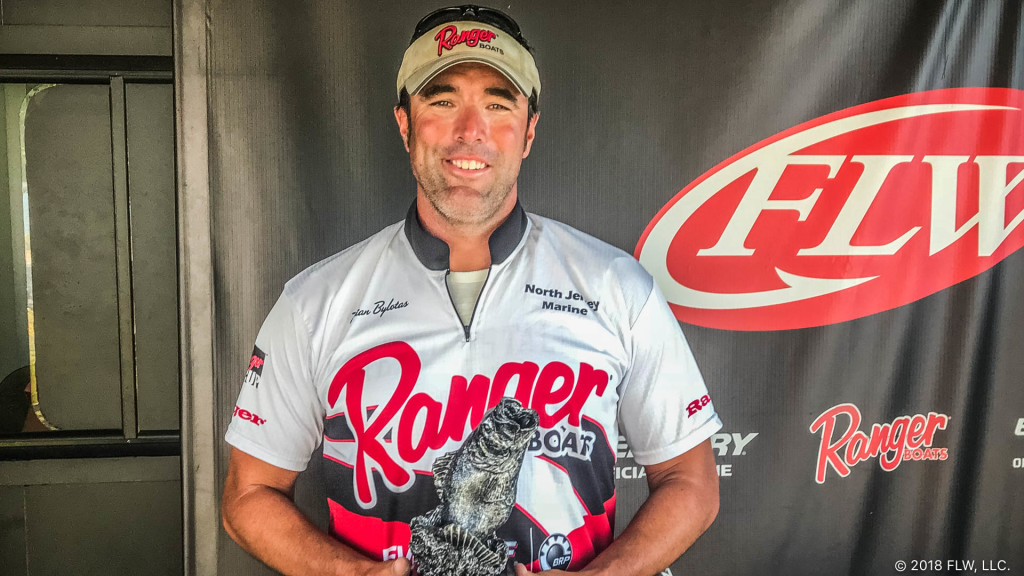 “I started in the river Saturday and caught a few small fish before running out to Lake Ontario about 8 (a.m.),” said Bylotas, who also clinched the BFL Northeast Division Angler of the Year (AOY) points title with his win. “There were some shoals out there and by 10 or 10:30 (a.m.) I got on a school that I had all to myself. I stayed there all day and my co-angler and I caught them pretty well.”

Bylotas said he focused on a ledge off of a shoal near Galloo Island. He said the baitfish were stacked up along a ¼-mile stretch in 25 to 30 feet of water and bass were schooling around them.

“On Sunday I started on a few rock piles in the river and caught a big one – about 5½ pounds – on a (4.5-inch Quick Limit Baits) motor oil-colored Dropshot Worm, which I had used Saturday morning in the river as well,” said Bylotas. “By 9 (a.m.), I went out to the same ledge and school on Lake Ontario, but the bite was a little bit slower. I probably caught around 35 fish Sunday compared to 50 fish Saturday.”

Bylotas said he used a 3.8-inch green pumpkin-colored Keitech Sexy Impact on a drop-shot rig on the ledge each day. He added that a Sexy Impact in Silver Flash color was also productive.

Dale Gorrell of Hatfield, Pennsylvania, caught a bass weighing 6 pounds, 4 ounces – the heaviest of the event in the Boater Division. The catch earned him the Boater Big Bass award of $945.

Amberg also caught the largest bass in the Co-angler Division – a fish weighing 6 pounds, 6 ounces – and earned the Co-angler Big Bass award of $236.