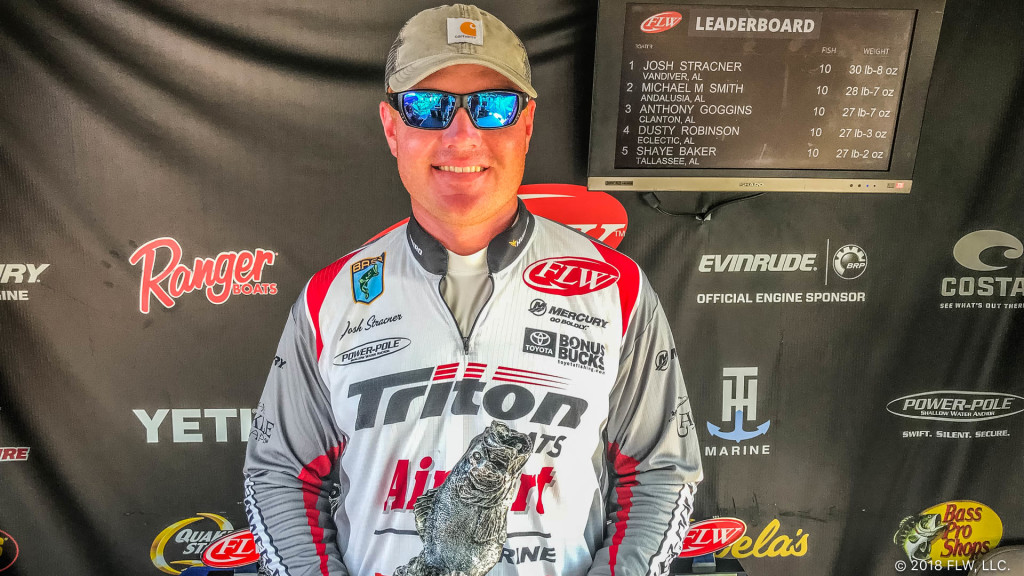 Stracner said he fished on the south end of the lake throughout the event. On Saturday, he primarily used a 6½-inch green-pumpkin-colored Netbait T-Mac Straight Tail worm on a Davis Bait Company shaky-head jig. He also used a homemade jig with a green-pumpkin Zoom Super Chunk Jr. trailer.

“I caught pretty much everything I weighed on the Netbait worm in brush piles and one from docks on the jig,” said Stracner. “I would pull up and throw that shaky-head and if I didn’t get anything in three or four casts, I moved on.

“I skipped the jig under the deepest docks I could find,” continued Stracner. “The one I weighed was from a dock near the launch ramp and it ended up being my biggest of the day.”

“I started with the shaky-head rig in brush piles Sunday but couldn’t get a bite,” said Stracner. “I picked up a (bone-colored) Zara Spook and was able to catch a limit really quick – including my biggest fish of the event.

“As the sun got up, I switched to a (Sexy Blue Back Herring-colored) Strike King 6XD crankbait and caught them well late in the day,” continued Stracner. “In the last couple of hours, I could get them at a brush pile on the first cast.”

Stracner said he ended up putting nearly 10 keepers in the boat on Saturday and 30 on Sunday.

“I got some new rods that really helped me out, especially the 7-foot, 6-inch Shimano (Expride A) heavy casting rod. It’s versatile and you can fish a lot of different techniques with it.”

Bueltmann caught a bass weighing 4 pounds, 9 ounces – the heaviest of the event in the Boater Division. The catch earned him the Boater Big Bass award of $442.

Caleb Scott of Sylacauga, Alabama, caught a two-day total of 10 bass weighing 23 pounds, 11 ounces, to win the Co-angler Division and $2,055.

Jacob Robinson of Temple, Georgia, caught the largest bass in the Co-angler Division – a fish weighing 3 pounds, 3 ounces – and earned the Co-angler Big Bass award of $221.