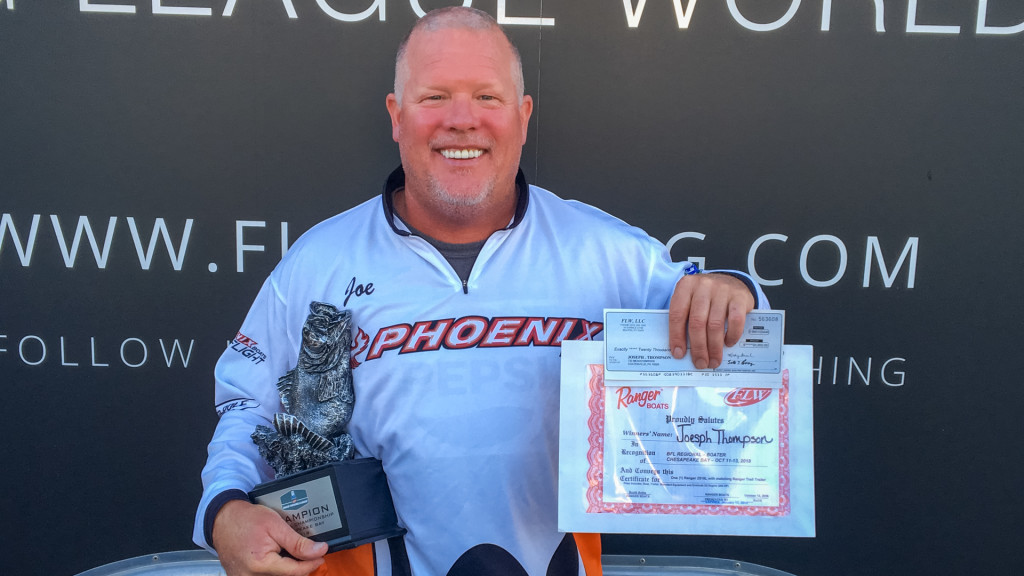 Originally scheduled for Oct. 11-13, competition Friday, Oct. 12, was cancelled by FLW officials due to high winds. As a result, the winner was determined by combining Thursday and Saturday’s weights.

“I really struggled on the first day until about noon,” said Thompson, who earned his second career win in BFL competition. “Every piece of structure in the North East River was covered with two or three boats because the fishing was so tough out on the flats.

“I went up into the North East Creek and found a little spot where there was just enough room for one more boat on a small piece of structure – a tree laydown. I fished it with a (green-pumpkin-colored) Zoom Finesse Worm on a drop-shot rig, and managed to catch a limit just before the end of the day.”

With just over 10 pounds of bass on Day One, Thompson knew he needed a big catch on Day Two to break into the top six – his ultimate goal.

“On the final morning I got a water temperature reading and found it had dropped 8 or 9 degrees,” said Thompson. “I was happy with how cold it got. With some history in mind, I knew people would have a hard time with the cold front, but also felt that I would excel.”

Thompson said he re-rigged a couple of rods for the conditions and proceeded to work through three big-fish areas.

“These are my home waters and there are three areas that I feel hold the big fish,” said Thompson. “In the morning, I targeted a dock in the North East River. I fished an Avocado-colored grub, very slowly, on a light, plain ball-headed jig and had two fish at noon. When the tide started to fall, I moved out into about 13 feet of water and fished a (green-pumpkin) Yamamoto Senko with a 1/16th-ounce (Picasso) tungsten bullet weight. I let the current move it along the bottom and got three bites.”

Thompson went on to give Susquehanna Fishing Tackle in Columbia, Pennsylvania, a special thanks for delivering all of the necessary tackle and credited his Minn Kota Ultrex trolling motor as his key piece of equipment at the event.

“This is the biggest win I’ve ever had and my Ultrex played a big role in it,” said Thompson. “The wind was really blowing on Day Two, but I was able to use the Spot Lock feature and focus on the fishing. The bites were subtle and I had to pay attention.”