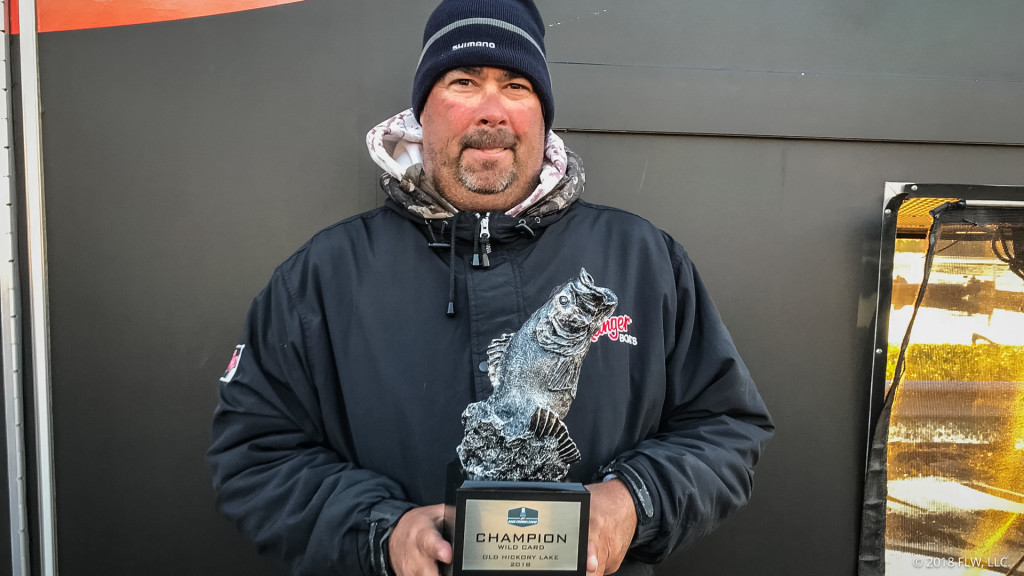 The BFL Wild Card tournament is a last-chance shot at the All-American for BFL anglers that didn’t qualify for a Regional Championship.

“This was the first time I’ve been there [to the lake], so I didn’t really know what to expect,” said Corn, who earned his fourth win in BFL competition. “I got there for practice the Sunday before the tournament and didn’t do well at all – I only caught one keeper. On Monday, I caught three keepers from three different locations.”

Corn said tornadoes and storms rolled through the Nashville area overnight Monday, pushing the water level up and turning just about everything to mud.

“I fished until noon on Tuesday and pretty much realized I was wasting my time, so I went back home and worked on Wednesday,” said Corn. “I returned Thursday and saw the water was falling, but it was still fairly muddy. Long story short, I’d had one decent day of practice.”

On Friday, Corn started the tournament near takeoff and caught one keeper on a black buzzbait, the lure that would produce most of his fish that day. He then ran up the Cumberland River to the areas that would win him the event.

“I had two different no-name sloughs,” said Corn. “I went into the first one and it was very muddy. I caught three in there – two of them were small and one was about a 3-pounder. Then I went to my second little slough and I didn’t realize what I’d found until I got in there. Between me and my co-angler, we caught 10 keepers in there in about 45 minutes.”

Corn’s two sloughs were both very shallow – no more than 2 to 3 feet deep – and well up the river, approximately a 40-mile run from takeoff. He said one was quite muddy, but the more productive one was clear.

Friday was cold and cloudy, with temperatures in the 40s all day long. Saturday dawned clear and even colder – in fact, temperatures remained below freezing for much of the day. Corn returned to his second slough Saturday morning and caught a 5-pounder in the first few minutes. After that, he struck out for the next several hours. Switching sloughs, Corn added a 3-pounder and that was it.

Corn said his 5-pounder ate a Dave’s Custom Baits Black Market Balsa square-billed crankbait in “Diet Dew splatterback”, which Corn described as a faded chartreuse with a black splatter. The crankbait also accounted for a good fish on Day One. Corn also rotated in a Riot Baits Minima Jig.

“When I caught that big one in the first 10 minutes Saturday, I felt like I’d made the All-American,” says Corn. “After I caught that second fish I still felt like I needed one more fish to win.”

Rubel caught the biggest bass of the tournament in the Boater Division Friday, a fish weighing 6 pounds, 12 ounces, which earned him the day’s Boater Big Bass Award of $165.

Jones caught the heaviest bass of the tournament in the Co-angler Division Friday, a fish weighing 3 pounds, 14 ounces, which earned him the day’s Co-Angler Big Bass Award of $57.