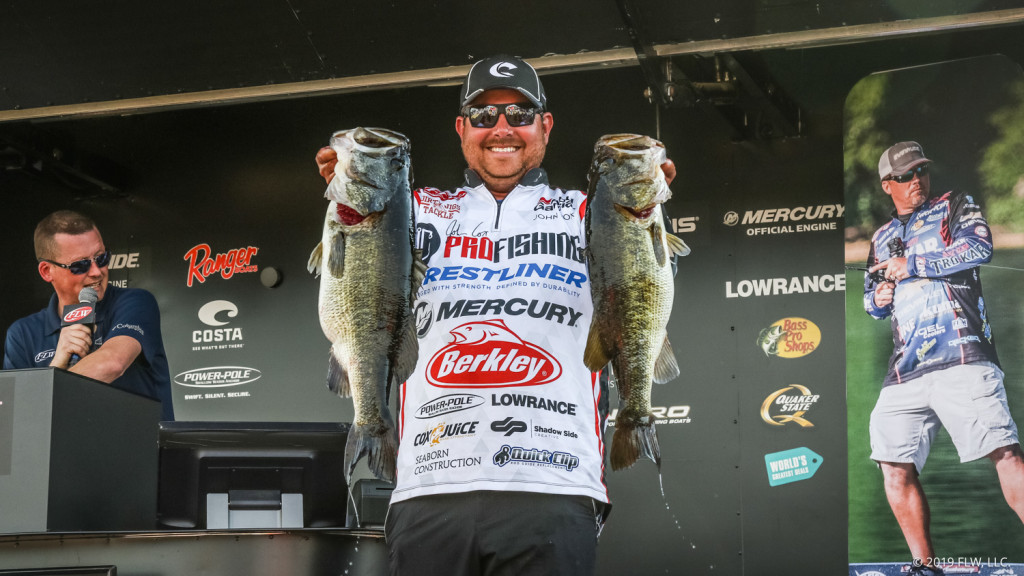 KISSIMMEE, Fla. – Pro John Cox of DeBary, Florida, hauled in a massive five-bass limit weighing 31 pounds, 9 ounces – the largest limit ever weighed in FLW Tour competition at Lake Toho – to grab the lead after day one of the FLW Tour at Lake Toho presented by Ranger Boats. Cox will bring a 6-pound, 10-ounce advantage over second-place pro John Voyles of Petersburg, Indiana, into Day Two of the four-day tournament that features 170 of the world’s most decorated bass-fishing professionals casting for a top award of up to $125,000 cash.

“When I got up this morning, I was just excited to go fishing,” said Cox, the 2016 FLW Cup Champion who has more than $1.1 million in career earnings. “The weather was warm – for once – and it was going to be sunny and not windy. It was an awesome day.

“I ran a ton of spots. I ran all around this lake [Toho] and then went down and ran around the other lakes and just kept spot-hopping,” continued Cox. “I caught one good one early and then it was steady – you’d get one here, get one there.”

Cox said he made roughly 30 stops throughout the day.

“I tried to do the sight-fishing thing, but there’s just no movement. There’s no fish moving,” said Cox. “There’s a few fish still there, but most of them left for some reason, so I just started fishing and caught two good ones.”

One of Cox’s two “good ones” was a 10-pound, 9-ouncer that he wrangled a bit deeper using a Berkley Windup Worm. It ended up being the third-largest bass ever weighed in FLW Tour competition at Lake Toho.

Overall, three of Cox’s fish came from beds, and two came from the Windup Worm. He said he culled three times as well.

“I’m not sure what I’ll do tomorrow – probably run a lot of the same spots.”

The top 10 pros after day one on Lake Toho are:

Cox’s 10-pound, 9-ounce largemouth was the heaviest fish weighed in the pro division Thursday, and earned him the day’s Big Bass Award of $500.

In FLW Tour competition, the full field of 170 pro anglers compete in the two-day opening round on Thursday and Friday. The top 30 pros based on their two-day accumulated weight advance to Saturday. Only the top 10 pros continue competition Sunday, with the winner determined by the heaviest accumulated weight from the four days of competition.

The total purse for the FLW Tour at Lake Toho presented by Ranger Boats is more than $860,000, including $9,000 through 65th place in the Pro Division. The tournament is hosted by Experience Kissimmee and the Kissimmee Sports Commission.

Prior to weigh-in each day FLW will host a free Family Fishing Expo at Big Toho Marina from 2 to 6 p.m. The Expo is a chance for fishing fans to meet their favorite anglers, enjoy interactive games, activities and giveaways provided by FLW sponsors, and learn more about the sport of fishing and other outdoor activities.

Also for youth, the FLW Foundation’s Unified Fishing Derby will be held at the marina on Saturday, Feb. 9, from Noon-2 p.m. The event is hosted by FLW Foundation pro Cody Kelley along with other FLW Tour anglers, and is free and open to anyone under the age of 18 and Special Olympics athletes. Rods and reels are available for use, but youth are encouraged to bring their own if they own one. The 1st and 2nd place anglers that catch the biggest fish will be recognized Saturday on the FLW Tour stage, just prior to the pros weighing in.

The popular FLW Live on-the-water program will air on Days Three and Four of the event, featuring live action from the boats of the tournament’s top pros each day. Host Travis Moran will be joined by veteran FLW Tour pro Peter Thliveros to break down the extended action each day from 8 a.m. to 2 p.m. On-the-water broadcasts will be live streamed on FLWFishing.com, the FLW YouTube channel and the FLW Facebook page.