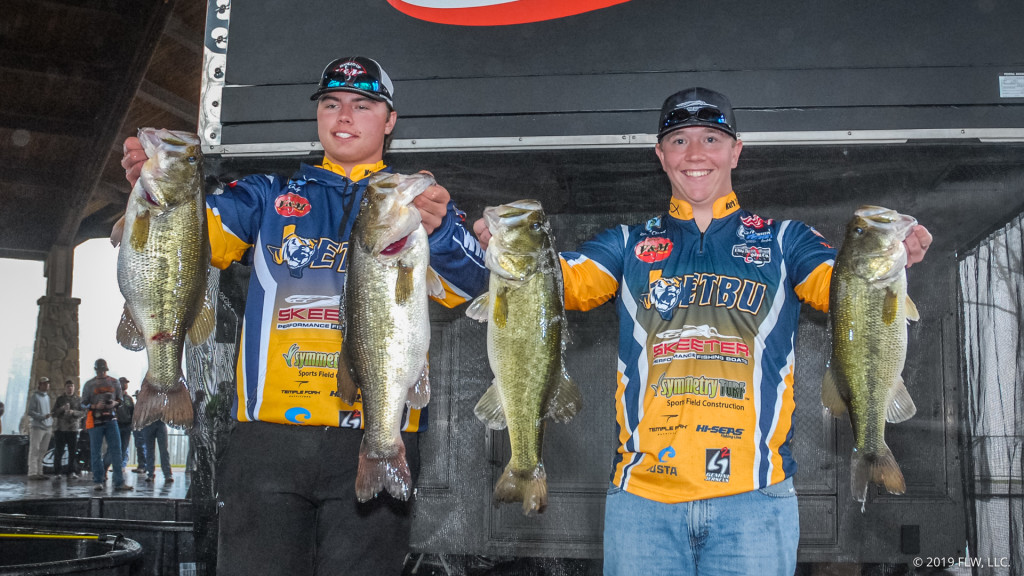 The duo said that they fished north of the bridge on Sam Rayburn, catching their bass on Carolina rigs.

“Our fish were sitting on an old road bed,” said Clark, a junior majoring in business administration. “We had found it in practice. The bass were prespawn, sitting in 8 to 10 feet of water, and they were moving in as we were catching them.”

“Most of our fish came from that one spot – literally two casts, over and over,” said Ross, a freshman majoring in business. “We started out throwing moving baits, but only managed to get one bite. Once we switched to the Carolina rig and slowed down it was like someone turned on the switch. We probably caught 40 to 50 fish throughout the day.”

The duo said that they threw two baits on the Carolina rigs – a black and blue-colored V&M Chopstick and a watermelon candy-colored V&M Baby Swamp Hog.

“I think the key for us was our Minn Kota Ultrex trolling motor,” said Clark. “The wind came up during the day, and the Ultrex kept us in one spot and allowed us to weed through the little fish and just keep upgrading.”

About FLW
FLW is the world’s largest tournament-fishing organization, providing anglers of all skill levels the opportunity to compete for millions in prize money in 2019 across five tournament circuits. Headquartered in Benton, Kentucky, with offices in Minneapolis, FLW and their partners conduct more than 290 bass-fishing tournaments annually around the world, including the United States, Canada, China, Italy, South Korea, Mexico, Portugal, South Africa and Spain. FLW tournament fishing can be seen on the Emmy-nominated “FLW" television show while FLW Bass Fishing magazine delivers cutting-edge tips from top pros. For more information visit FLWFishing.com and follow FLW at Facebook, Twitter, Instagram, and YouTube.