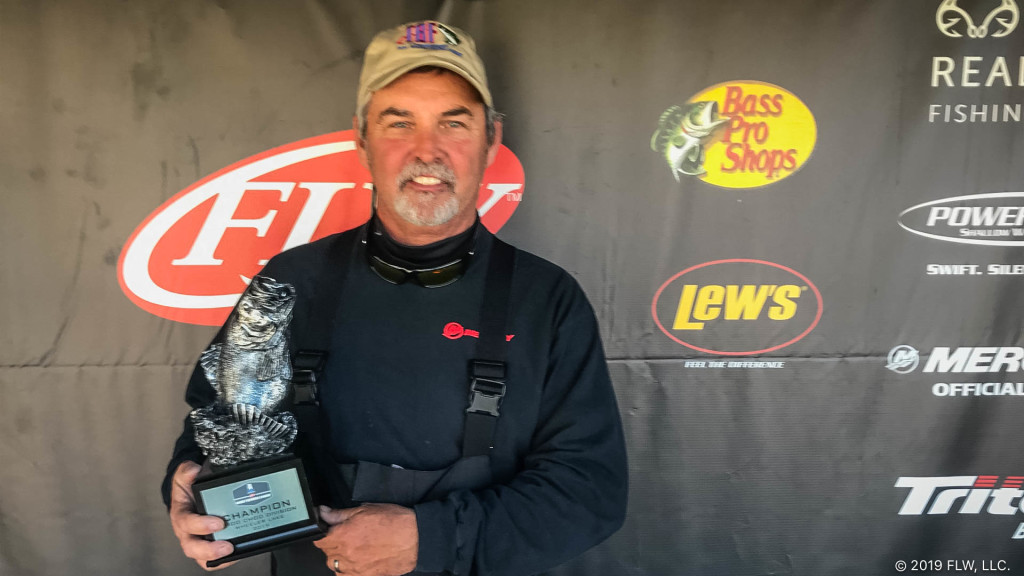 Jewell said he primarily ran chunk rock banks and gravel bars on the lower end of the lake near First and Second creeks, and caught the majority of his fish in 4 to 6 feet of water. He described his main area as a chunk rock and gravel point heading into a pocket off of the main river.

“I struggled early – it was probably 8 [a.m.] by the time I found my fish,” said Jewell, who earned his first win in FLW competition. “On Monday in practice I’d found a couple fish on a spot with gravel and chunk rock, and when I went to it Saturday, they were loaded on it. I pretty much stayed there all day.”

Jewell said he used a chartreuse and white-colored custom vibrating jig with a white Zoom Super Fluke Jr. trailer and a crawfish-colored Strike King 1.5 KVD Rattling square-billed crankbait to catch his fish. He estimated that he caught 15 fish on the vibrating jig, with three largemouth and one smallmouth reaching the scale, and six or seven fish on the crankbait, with one smallmouth topping off the limit.

During the final 90 minutes of his day, Jewell said he made a “milk-run” through some “big-fish” spots, eventually landing the heaviest bass of the tournament in the Boater Division – a 6-pound, 3-ouncer.

“The fish was on big chunk rock offshore and there was a boat sitting right on top of it. I waited for the boat to leave, then threw up  there and caught it on the vibrating jig,” said Jewell. “It was out in 12 feet of water.”

Markus also caught the largest bass in the Co-angler Division, a fish weighing in at 6 pounds, 3 ounces. The catch earned him the day’s Co-angler Big Bass award of $205.