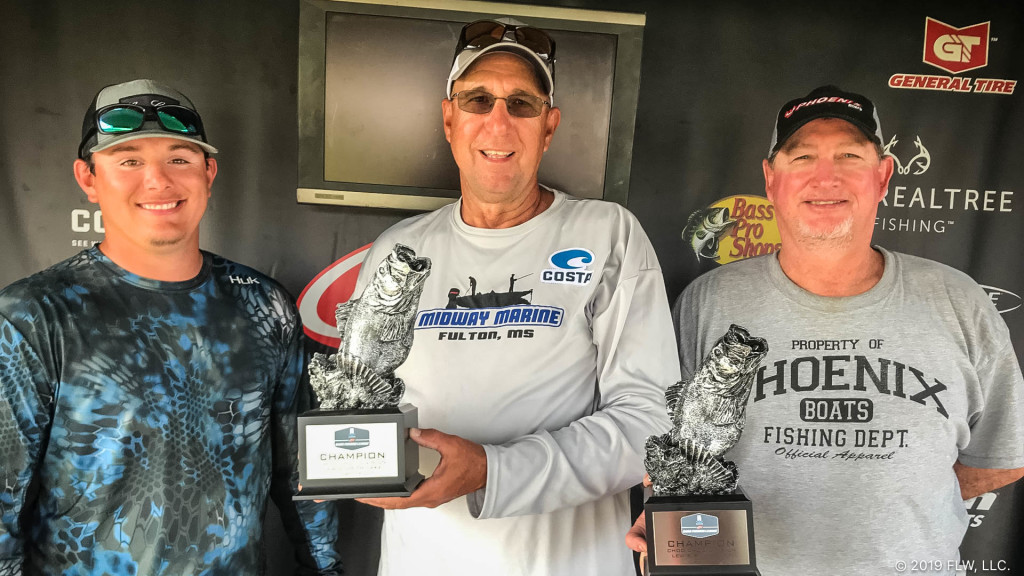 JASPER, Ala. – Boaters David Hudson of Jasper, and Greg Pugh and Dexton Gregory, both of Cullman, Alabama, ended up in a three-way tie for the win at the T-H Marine FLW Bass Fishing League (BFL) Choo Choo Division tournament on Lewis Smith Lake after each bringing five bass weighing 15 pounds, 1 ounce, to the scale. After contingency awards, Hudson earned $3,001, with Gregory taking home $2,801 and Pugh $2,501.

Gregory and Pugh said they caught their bass sight-fishing. Gregory caught his fish from Rock Creek – both largemouth and spotted bass.

“I had a few largemouth I found first thing [in the morning]. After that I went and got some spotted bass that I actually found on Friday during practice,” said Gregory, who earned his first in win FLW competition. “The largemouth were on little flats in the backs of pockets in 1 to 3 feet of water, while the spots were keyed in on certain rocks in 5 to 7 feet of water. I ended up catching 15 keepers throughout the day.”

Pugh, who earned his second career victory in BFL competition, primarily fished mid-lake, catching bass on jerkbaits, topwaters, spinnerbaits, buzzbaits and Hawg Caller jigs. All of the fish that he weighed in came via sight-fishing, though.

Hudson worked in Ryan Creek and on the main lake and said he caught approximately 50 fish throughout the day.

“The other two [Gregory and Pugh] were sight-fishing, but I just fished, with most of my bites coming from 8 to 10 feet of water,” said Hudson, who earned his first career victory as a boater in FLW competition. “They could’ve been spawning, but I couldn’t see them – I didn’t try to. All of my fish were spotted bass, and I think that the Gamma 6-pound-test fluorocarbon line is what made the difference for me. The water in the area was so clear, and when I started using it I had a lot more bites.”

Hudson said his baits of choice were wacky-rigged Watermelon Seed- and green-pumpkin-colored Yamamoto Senkos and a shaky-head rig with a Payback-colored Reaction Innovations Flirt Worm.

Chad Aaron of Lawrenceburg, Tennessee, caught a 4-pound, 12-ounce bass – the heaviest of the event in the Boater Division – and earned the day’s Boater Big Bass award of $500.

Matthew Spears of Jasper caught the largest bass in the Co-angler Division, a fish weighing in at 3 pounds, 14 ounces. The catch earned him the day’s Co-angler Big Bass award of $222.

The tournament was hosted by the Chamber of Commerce Walker County.