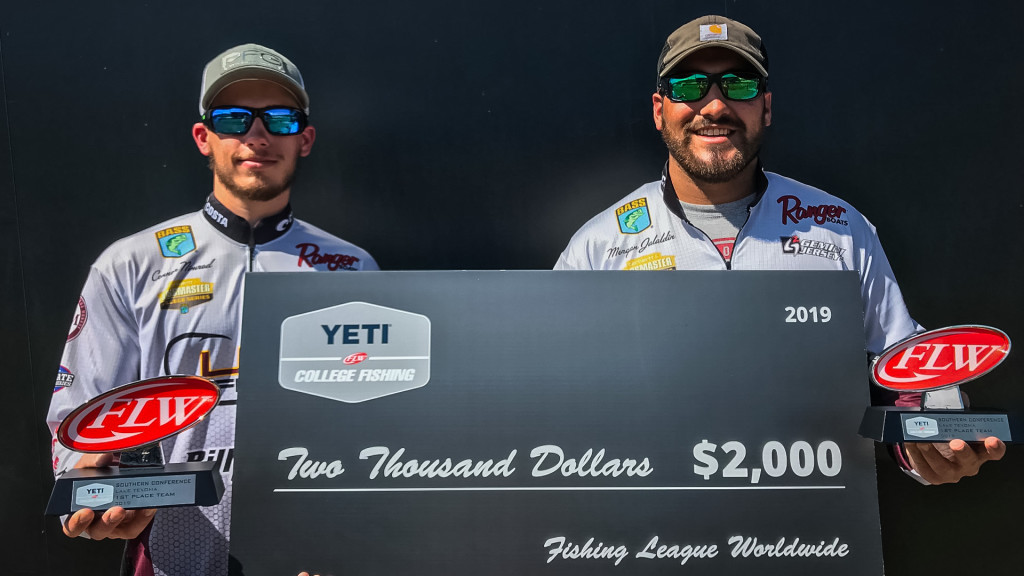 “Winning was definitely unexpected after the start that we had,” said Nimrod, a freshman at ULM majoring in business marketing. “It was very foggy, and takeoff was delayed until around 10:30. We were boat No. 92, and when we got to the arm of the lake that we wanted to fish there was already 30 to 40 boats fishing there.”

“We watched guy catch a 5-pounder from a dock that we knew was there and we had to move,” said Jalaldin, a fresman majoring in nursing. “We abandoned our pattern completely and decided to make a move to a new area.”

“We decided to change up altogether and ran 25 minutes to a completely different spot mid-lake that we had found in practice,” Nimrod said. “We weren’t really planning to go there during the tournament, but I’m glad that we did.”

The duo described their winning area as a pea gravel bank that had isolated, broken-off bushes in 2- to 4-feet of water. They managed to catch 7 or 8 keepers in their fog-shortened day, all coming on Ned rigs. They fished Z-Man TRD Crawz and BioSpawn ExoSticks that they cut in half on their Ned Rig setups, and credited their long practices and patience as the key to their victory.

“I think the key was really buckling down in practice,” Jalaldin said. “We had never fished here before, but we were out there for three full days, sunrise to sunset, to practice and learn the lake.

“We were able to catch every fish in that area by really slowing down and fishing very thoroughly,” Nimrod went on to say.

The YETI FLW College Fishing event on Lake Texoma presented by Bass Pro Shops was hosted by the Denison Area Chamber of Commerce. It was the second of three regular-season qualifying tournament for Southern Conference anglers. The next event for FLW College Fishing anglers will be the Central Conference opener, April 12 at Lake Cumberland in Burnside, Kentucky.