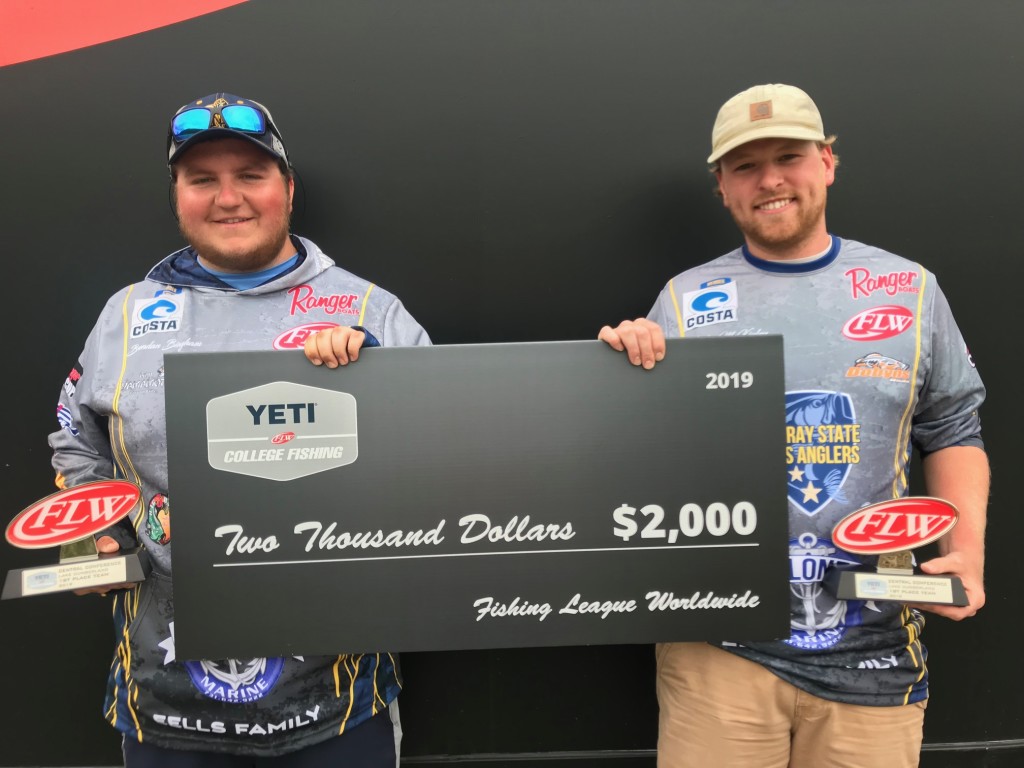 The duo said that they caught a combined mix of largemouth and smallmouth – 20 to 30 throughout the day – bringing a five-bass limit to the scale consisting of two smallmouth and three largemouth. They credited shad-colored Keitech swimbaits as the key bait for their smallmouth and flipping a green-pumpkin with blue flake and orange-colored Bruiser Baits Crazy Craw for their largemouth.

“It’s nice to be ending my College Fishing career with a win,” said McKinley, a senior graduating in May with a degree in advertising. “We were planning on targeting largemouth, but we started out on smallmouth in the morning hoping for a bonus big bite and we got one. We were fishing on the river near Jamestown until 9:30 or 10 (a.m.) then we switched to flipping for largemouth. We caught 10 to 15 keepers flipping the Crazy Craw – including another nice smallmouth.”

“It was an awesome day – there was at least two or three times that we were both hooked up, back-to-back,” said Bingham, a sophomore majoring in Occupational Safety and Health Administration. “We were mainly targeting laydowns on transition banks. We stayed in one spot – Pumpkin Creek, up by the Jamestown Marina – for most of the day. Our river smallmouth spot was near there as well.

“I think our key for the day was picking up the flipping sticks when the sun came out,” McKinley went on to say. “We made the right decision and it was great to get the win on a really fun day of fishing.”

The YETI FLW College Fishing event on Lake Cumberland presented by Costa was hosted by the Burnside Tourism Commission. It was the first of three regular-season qualifying tournaments for Central Conference anglers. The next event for FLW College Fishing anglers will be the Northern Conference opener, April 26 at Smith Mountain Lake in Huddleston, Virginia.