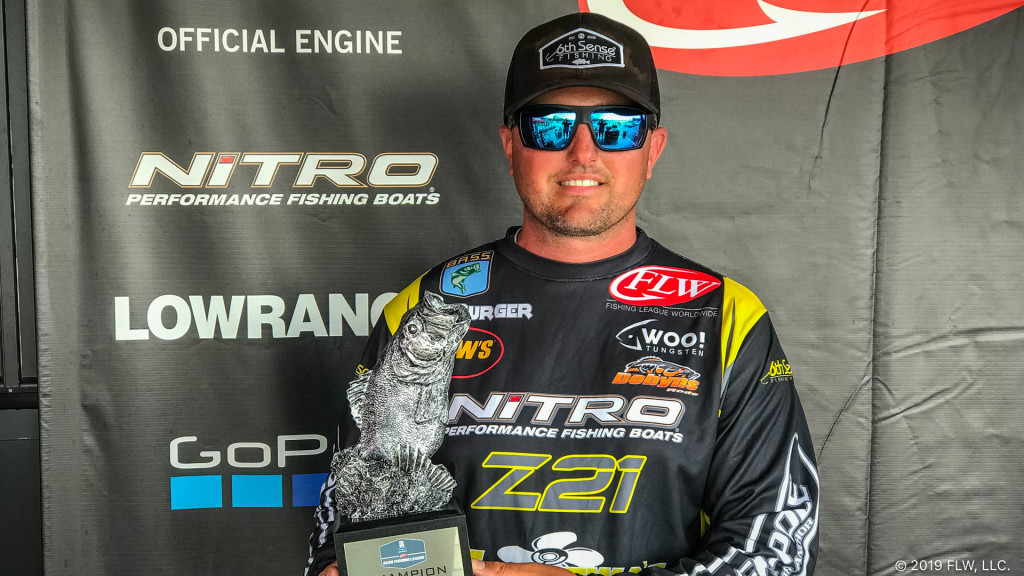 Burger said he spent the day fishing isolated grass clumps and wood near the mouth of the Susquehanna River. He said he caught about 10 keepers all day, and ended up weighing all largemouth.

“I’d usually fish different areas that are more normal for this time of year, but with the weather they’ve had, I fished some old stuff,” said Burger, who earned his first win in FLW competition. “When they have a lot of rain, they open up the Conowingo Dam and it muddies up the water in the North East area. And when they close it, the water near Havre de Grace is the first to clean up, so I stayed around the mouth of the river and targeted spawning and prespawn fish.”

For prespawners, Burger used a ½-ounce, white-colored 6th Sense Divine Swim-Jig with a 4-inch X Zone Muscle Back Craw trailer and a 3/8-ounce, black and blue Z-Man ChatterBait with a 4-inch Tennessee Shad-colored X Zone Swammer Swimbait. When he slowed down for bedding fish, he worked a 3/8-ounce, black and blue-colored 6th sense Divine Hybrid jig with a 3.25-inch X Zone Rebel Chunk trailer, as well as a 6-inch, Texas-rigged X Zone True Center Stick, also in black and blue.

“My Lowrance electronics and Power-Poles were also crucial,” said Burger. “When you’re working with tides and wind you have to be stealthy, and the poles help. My Lowrance side imaging is how I found a lot of the stuff I fished.”

Caravan caught a bass weighing 7 pounds even – the heaviest of the event in the Boater Division – and earned the day’s Boater Big Bass award of $540.

Joseph Amberg Jr. of Hawley, Pennsylvania, caught the heaviest bass in the Co-angler Division, a fish weighing in at 5 pounds, 14 ounces. The catch earned him the day’s Co-angler Big Bass award of $270.