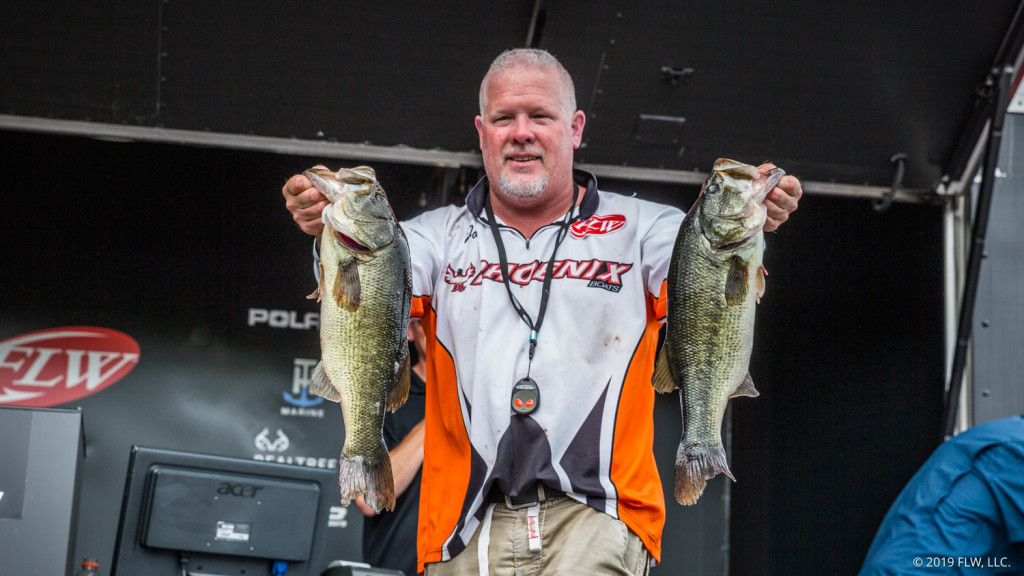 The T-H Marine BFL All-American features a field of the top 98 boaters and co-anglers from across the 24-division BFL circuit competing for a grand prize of up to $120,000 in the Boater Division and $60,000 in the Co-angler Division. The top boater will receive an invitation to compete for bass fishing’s most coveted prize – the 2019 FLW Cup – Aug. 9-11 on Lake Hamilton in Hot Springs, Arkansas.

Thompson said he fished five key spots today, three of which he rotated through for the majority of his day.

“I went to my first spot that I had really big fish at in pre-practice,” said Thompson, who has six career top-10 finishes and one win on the Potomac River in BFL competition. “I spent a lot of time trying to make that spot happen and it just didn’t.

“I left and bounced around the river. I pretty much stuck to my main spots and took what the river gave me,” continued Thompson. “There’s a variety of different patterns and things going on.”

Thompson said that he caught around 12 to 15 keepers, adding that he had a limit fairly early and was culling by 9 a.m.

“I culled probably three or four times, but just for ounces – except for the couple of big ones I caught. I had two over 4 pounds,” said Thompson.

Thompson went on to say that he feels good about what awaits him on Friday.

“My two primary spots I left, and I feel that there’s still fish there. They’re places I hardly ever see anybody fish,” said Thompson. “I was only able to get one today at my big fish spot – it’s gnarly, gnarly stuff. I’m going to start there tomorrow and see if I can get a big one right away, then run around and try to find 2½-pounders. It’s hard to get a big fish right now.”

The top 10 boaters after day one on the Potomac River are:

BFL All-American competitors will take off from Smallwood State Park, located at 2750 Sweden Point Road in Marbury, at 7 a.m. EDT each morning. Friday’s weigh-in, May 31, will be held at the park beginning at 3:30 p.m. Saturday’s Championship weigh-in, June 1, will also be held at the park, but will begin at 4 p.m.

The 2019 BFL All-American is being hosted by the Charles County Board of Commissioners and Department of Recreation, Parks and Tourism.

The popular FLW Live on-the-water program will air Friday, May 31 and Saturday, June 1 of the BFL All-American. FLW Live features live action from the boats of the tournament’s top anglers each day. Host Travis Moran will be joined by FLW Tour pro Luke Dunkin to break down the extended action each day from 8 a.m. to 2 p.m. On-the-water broadcasts will be live streamed on FLWFishing.com, the FLW YouTube channel and the FLW Facebook page.