Virginia’s Dacey Still on Top in the Co-angler Division 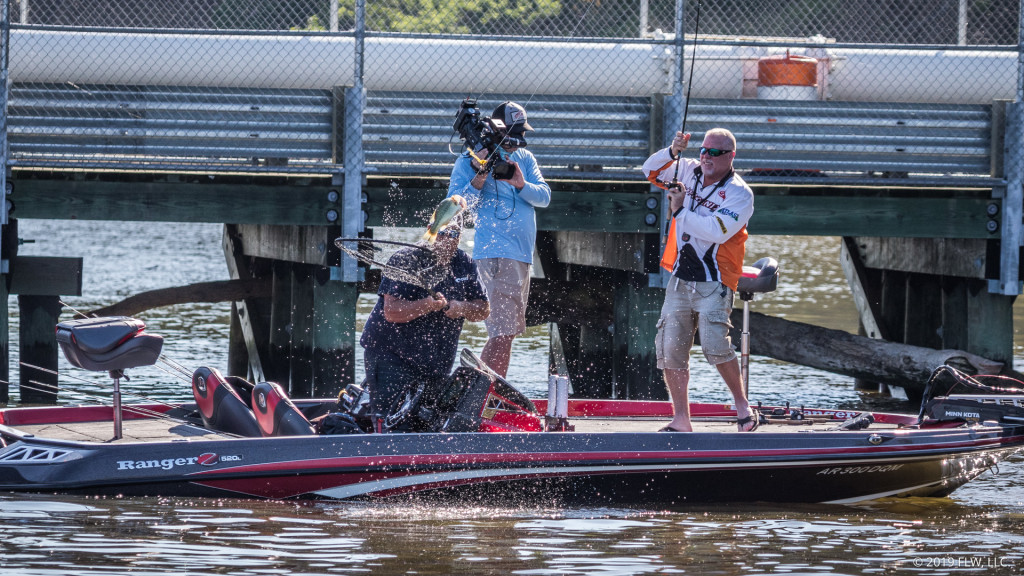 The T-H Marine BFL All-American features a field of the top 98 boaters and co-anglers from across the 24-division BFL circuit competing for a grand prize of up to $120,000 in the Boater Division and $60,000 in the Co-angler Division. The top boater will receive an invitation to compete for bass fishing’s most coveted prize – the 2019 FLW Cup – Aug. 9-11 on Lake Hamilton in Hot Springs, Arkansas.

“I had three primary areas that I really counted on fishing today,” said Thompson, who is fishing in his first BFL All-American. “The first spot I really was counting on catching a big fish. I didn’t catch anything, but I noticed that the tide wasn’t moving that well so I wasn’t really alarmed. I called an audible and didn’t go to my other areas because I knew I needed the tide moving and didn’t want to be disappointed.

“I went to a spot I didn’t plan on fishing, but it felt right and it ended up being the big move of the day,” continued Thompson. “I went and fished grass and caught two good fish and that got my day started. From there, I did my run – I kept hitting my three spots all day. I rolled up to my other primary spot, caught some fish and left them hitting so I could hit the other spot while there was still tide moving. I got there and another competitor was on it. I asked him if I could fish it, he told me no, so I said ‘no problem’ and left.”

Thompson said he jumped around from one spot to the next, adding that once he felt he had enough weight to comfortably make it to the final day, he opted to conserve fish and try other things.

“My spots are postspawn transition spots where they are getting ready to move into their summer stuff and they’re just feeding up,” said Thompson. “They’re not hanging out there – if they’re there, they’re going to eat.”

Thompson said his key bait is a green-pumpkin-colored Zoom Brush Hog on a 5/0-sized Gamakatsu hook.

“Tomorrow there should be less pressure from tournament anglers, so I’m pretty sure I’ll probably be able to get on my two primary spots,” said Thompson. “I didn’t get one [keeper] bite on my big fish spot today – not one. I’m definitely going to check it again tomorrow. I might have to run a little more water tomorrow and try a couple other things because these guys are hot on my heels.”

The top 10 boaters advancing to the final day of competition on the Potomac River are:

Ben Dacey of Chesterfield, Virginia, held the lead in the Co-angler Division with a two-day total of 10 bass weighing 26 pounds, 7 ounces, followed by Zach Barnes of Chickamauga, Georgia, who also has a two-day cumulative total of 10 bass weighing 26 pounds, 7 ounces. Per FLW tie-breaker rules, Dacey earned the top spot due to posting an overall heaver single-day limit during the event.

The final 10 co-anglers are:

The final 10 boaters and co-anglers will take off from Smallwood State Park, located at 2750 Sweden Point Road in Marbury, at 7 a.m. EDT Saturday. Saturday’s Championship weigh-in will also be held at the park, beginning at 4 p.m. Takeoffs and weigh-ins are free and open to the public.

The 2019 BFL All-American is being hosted by the Charles County Board of Commissioners and Department of Recreation, Parks and Tourism.

The popular FLW Live on-the-water program will air Saturday, June 1 of the BFL All-American. FLW Live features live action from the boats of the tournament’s top anglers each day. Host Travis Moran will be joined by FLW Tour pro Luke Dunkin and FLW emcee Chris Jones to break down the extended action from 8 a.m. to 2 p.m. On-the-water broadcasts will be live streamed on FLWFishing.com, the FLW YouTube channel and the FLW Facebook page.

The 2019 BFL is a 24-division circuit devoted to weekend anglers, with 128 tournaments throughout the season, five qualifying events in each division. The top 45 boaters and co-anglers from each division, along with the five winners of the qualifying events, will advance to one of six regional tournaments where they are competing to finish in the top six, which then qualifies them for one of the longest-running championships in all of competitive bass fishing – the BFL All-American. Top performers in the BFL can move up to the Costa FLW Series or even the FLW Tour.