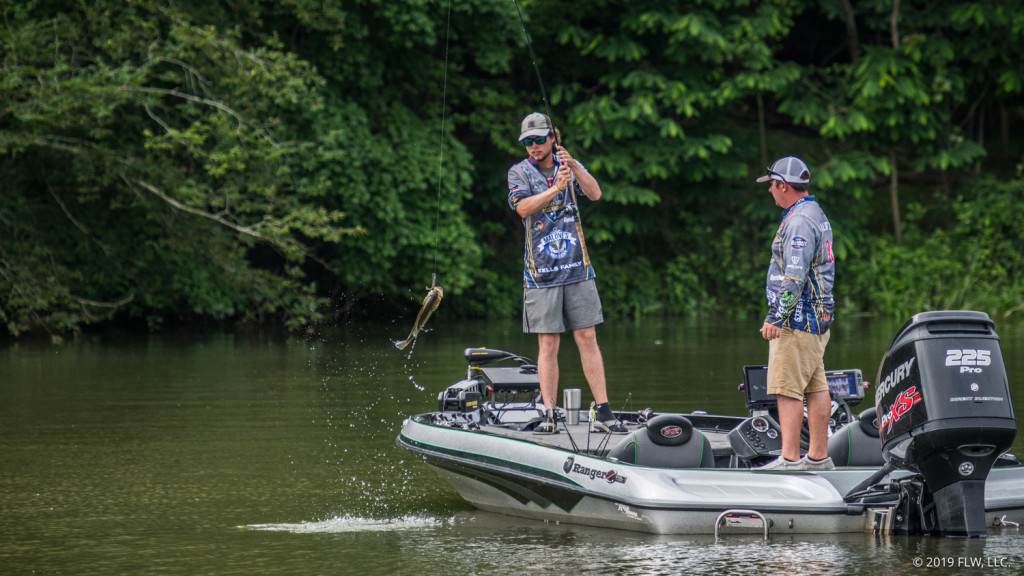 CHARLES COUNTY, Md. – The Murray State University duo of Adam Puckett and Blake Albertson, both of Bloomington, Indiana, brought a five-bass limit to the stage Wednesday weighing 18 pounds, 14 ounces, to jump to the top of the leaderboard – after starting the day in seventh place – and now bring a 1-pound, 2-ounce, lead into the final day of the 2019 YETI FLW College Fishing National Championship on the Potomac River presented by Lowrance. The Racers’ two-day total of 10 bass weighing 35-11 has paced the 148-team field thus far, with Tennessee’s Bethel University right behind them in second place with 10 bass weighing 34-9.

The field is now cut to just the final 10 teams at the three-day event, hosted by the Charles County Board of Commissioners and Department of Recreation, Parks and Tourism, that featured the top college bass-fishing teams from across the nation competing in the internationally-televised no-entry fee tournament for a top prize of up to $50,000, including a new Ranger Z175 boat with a 115-horsepower Evinrude or Mercury outboard and automatic entry into the 2019 FLW Cup, the world championship of bass fishing, held August 9-11 on Lake Hamilton in Hot Springs, Arkansas.

“We fished the same spot today that we did on day one,” said Puckett, a junior majoring in agricultural science technology. “We only weighed in two fish on a ChatterBait yesterday, but today pretty much every one of them came on a ChatterBait in the grass.”

“It was a good day,” added Albertson, a junior majoring in business administration. “We caught around 15 keepers throughout the day. We had a limit pretty quick and were culling by 8:30 (a.m.)”

The duo described the main area that they were fishing as a flat creek with the “right” grass. They described the creek as being very susceptible to the tide.

“When it’s low tide, you can’t even get a boat in there,” said Puckett. “The fish have to come out and then reload every night. They did last night, so I’m hoping tomorrow that it reloads again.”

“There were three pretty good bags caught out of there today, but I believe that we should have the area to ourselves tomorrow,” said Albertson.

“It was one of those days were nothing went wrong and everything was going our way,” Puckett went on to say. “I made a cast out into the grass, had a backlash, and started pulling it out. It was really tangled, and when I finally got it pulled out and reeled in there was a 4½-pounder on it.”

The top 10 teams on the Potomac River that will advance to the final day of competition are:

The State University of New York College of Environmental Science and Forestry (SUNY-ESF) team of Patrick Durand and Benjamin Schultes was assessed a 2-pound penalty Wednesday for violation of FLW College Fishing rule No. 8 regarding personal flotation devices. The SUNY-ESF team finished the tournament with six bass totaling 17-11 and finished in 98th place.

The final 10 teams will take off from Smallwood State Park, located at 2750 Sweden Point Road in Marbury, at 7 a.m. EDT Thursday. Thursday’s championship weigh-in will be held at the State Park, beginning at 3 p.m. Takeoffs and weigh-ins are free and open to the public.

Television coverage of the YETI FLW College Fishing National Championship will premiere in the fall of 2019. The Emmy-nominated "FLW" television show airs each Saturday night at 7 p.m. EST and is broadcast to more than 63 million cable, satellite and telecommunications households in the U.S., Canada and the Caribbean on the World Fishing Network (WFN), the leading entertainment destination and digital resource for anglers throughout North America. FLW television is also distributed internationally to FLW partner countries, including Canada, China, Italy, Korea, Mexico, Namibia, Portugal, South Africa, Spain and Zimbabwe.

The popular FLW Live on-the-water program will air on Thursday, June 6, for the College Fishing National Championship. FLW Live features live action from the boats of the tournament’s top anglers each day. Host Travis Moran will be joined by FLW Tour pro Miles Burghoff and FLW emcee Chris Jones to break down the extended action from 8 a.m. to 2 p.m. On-the-water broadcasts will be live streamed on FLWFishing.com, the FLW YouTube channel and the FLW Facebook page.