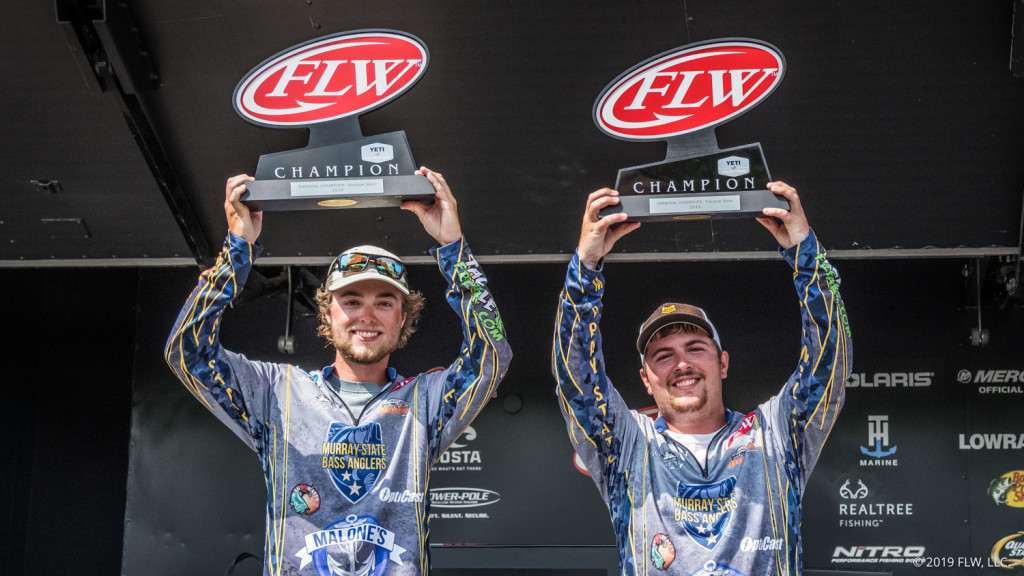 CHARLES COUNTY, Md. – The Murray State University duo of Adam Puckett and Blake Albertson, both of Bloomington, Indiana, weighed a five-bass limit Thursday totaling 15 pounds, 8 ounces, to win the 2019 YETI FLW College Fishing National Championship on the Potomac River presented by Lowrance. The win earned the team a $50,000 prize package, including a new Ranger Z175 boat with a 115-horsepower Evinrude or Mercury outboard and automatic entry into the 2019 FLW Cup, the world championship of bass fishing.

“I’m absolutely speechless right now,” said Albertson, a junior majoring in business administration. “This whole week could not have gone any better. It’s been unbelievable. We knew nothing about tidal water fisheries coming into this event. We came up here and really made it up as we went in practice, and everything just fell into place. This is just insane.”

“We landed everything, and everything went right this week,” added Puckett, a junior majoring in agricultural science technology. “We knew it was going to come down to ounces today, but that was way too close. I knew we were going to enjoy this tournament, but I had no idea that we were going to win.”

The duo spent the entire three-day tournament fishing in the same creek, a 200-yard stretch that they described as very shallow and having the “right” type of grass. They averaged around 20 keepers each day on Z-Man EverGreen Jack Hammer ChatterBaits – ½ ounce with a silver Gene Larew Sweet Swimmer for Albertson and a 3/8 ounce with a green-pumpkin-colored Lake Fork Live Magic Shad swimbait for Puckett. They also added a few keepers on a Yamamoto Senko (watermelon) and a Reaction Innovations Spicy Beaver (black and blue with purple).

“I probably could have got away with only having two poles with me all week,” said Albertson. “They just kept reloading.”

“For us, the key for fishing on the shore was high tide – the 30-minute window before and the 30-minutes after,” Puckett said. “There had to be water moving in order for us to get bit.”

Now the duo set their sights on the biggest tournament of their young careers – competing against the best anglers in the world this August at the FLW Cup on Lake Hamilton in Hot Springs, Arkansas.

“I was nervous coming into this tournament, I can’t imagine – heck, I’m already nervous thinking about that tournament,” Albertson went on to say. “I’m going to get on the phone as soon as we leave here and start doing some research tonight. I can’t wait.”

The top 10 teams on the Potomac River finished:

Overall there were 50 bass weighing 150 pounds, 7 ounces caught by the final 10 college teams Thursday. All 10 teams brought a five-bass limit to the scale.

The 2019 YETI FLW College Fishing National Championship on the Potomac River presented by Lowrance was hosted by the Charles County Board of Commissioners and Department of Recreation, Parks and Tourism and featured 148 of the top college bass-fishing teams from across the country competing in the internationally-televised no-entry fee tournament for a top prize of up to $50,000, including a new Ranger Z175 boat with a 115-horsepower Evinrude or Mercury outboard and automatic entry into the 2019 FLW Cup, the world championship of bass fishing, held August 9-11 on Lake Hamilton in Hot Springs, Arkansas.

Television coverage of the YETI FLW College Fishing National Championship will premiere in the fall of 2019. The Emmy-nominated "FLW" television show airs each Saturday night at 7 p.m. EST and is broadcast to more than 63 million cable, satellite and telecommunications households in the U.S., Canada and the Caribbean on the World Fishing Network (WFN), the leading entertainment destination and digital resource for anglers throughout North America. FLW television is also distributed internationally to FLW partner countries, including Canada, China, Italy, Korea, Mexico, Namibia, Portugal, South Africa, Spain and Zimbabwe.