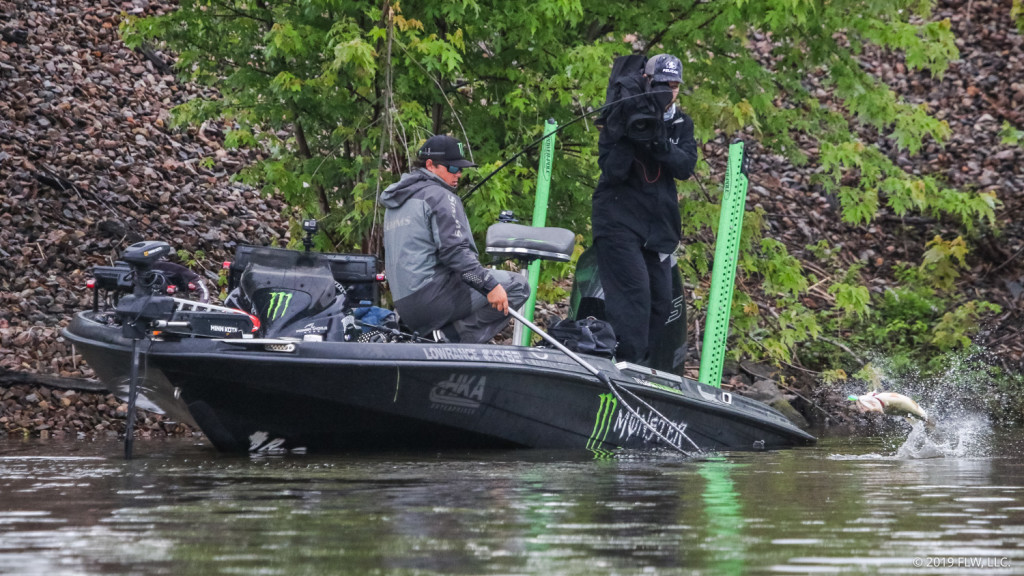 PLATTSBURGH, N.Y. – Pro Tyler Stewart of West Monroe, Louisiana, caught a five-bass limit Saturday weighing 18 pounds, 5 ounces, to keep the lead after day three of the FLW Tour at Lake Champlain presented by T-H Marine. Stewart’s three-day total of 58-6 will lead the final 10 pros into Championship Sunday, where the top prize of up to $125,000 will be up for grabs.

“The day started off kind of slow. I got down to my main places and it was crowded – there was a [local] tournament out of Ticonderoga and someone was fishing one of my main holes for fun,” said Stewart, who is looking to win his first career FLW Tour event. “I ended up catching a 4½-pounder and got some good momentum going. I just grinded all day – caught some good fish and kept the wheels on. I ran some new stuff, too – stuff that looks right.”

Stewart said he caught the majority of his largemouth flipping a jig. He also weighed one from a square-billed crankbait and a 3½-pound smallmouth on a Keitech swimbait, which culled out a largemouth toward the end of the day.

“The largemouth are in about 6 inches of water, and I think a lot of people are overlooking that. I’m catching them super shallow and on current- and bait-related stuff,” said Stewart. “I’d love to be able to get on my stuff tomorrow and fish it thoroughly.”

On Championship Sunday, Stewart said he plans to stay the course and fish Ticonderoga – the area that’s produced the majority of his weight all week – no matter what challenges the weather may pose.

“I don’t care if takes me three hours to get to Ticonderoga – that’s where I’m going,” Stewart went on to say.

The top 10 pros advancing to the final day of competition Sunday on Lake Champlain are:

Anglers were also vying for the prestigious 2019 FLW Tour Angler of the Year (AOY) title that is determined by the most points accumulated over the seven Tour events in 2019.

Polaris pro David Dudley of Lynchburg, Virginia, won the AOY title Saturday, becoming the first angler in the history of the FLW Tour to claim four titles (2019, 2012, 2011 and 2008). He narrowly edged out Berkley pro John Cox of DeBary, Florida, by just 17 points in a tightly contested race that was too close to call until Cox’s 28th place finish today. Dudley, who received $100,000 for the title, will also receive an automatic berth into the 2020 FLW Cup.

Pro Ron Nelson of Berrien Springs, Michigan, clinched the Polaris 2019 FLW Tour Rookie of the Year (ROY) award Saturday, which is awarded to the rookie pro angler who finishes the season with the highest point total. For his efforts, Nelson won a Polaris Sportsman® 570 ATV.

In FLW Tour competition, the full field of 163 pro anglers competed in the two-day opening round on Thursday and Friday. The top 30 pros based on their two-day accumulated weight advanced to Saturday. Now, only the top 10 pros continue will competition Sunday, with the winner determined by the heaviest accumulated weight from the four days of competition.

The total purse for the FLW Tour at Lake Champlain presented by T-H Marine is more than $860,000. The tournament is hosted by the City of Plattsburgh and the Adirondack Coast Visitors Bureau.

Anglers will take off for the final day of competition at 6:30 a.m. EST Sunday from Plattsburgh City Marina, located at 5 Dock St., in Plattsburgh. Sunday’s championship weigh-in will be held at the marina beginning at 4 p.m.

In conjunction with the weigh-in, FLW will host a free Family Fishing Expo at Plattsburgh City Marina from 2 to 6 p.m. Sunday. The Expo is a chance for fishing fans to meet their favorite anglers, enjoy interactive games, activities and giveaways provided by FLW sponsors, as well as learn more about the sport of fishing and other outdoor activities.

The popular FLW Live on-the-water program will air on Sunday, featuring live action from the boats of the tournament’s top pros each day. Host Travis Moran will be joined by veteran FLW Tour pro Todd Hollowell to break down the extended action from 8 a.m. to 2 p.m. On-the-water broadcasts will be live streamed on FLWFishing.com, the FLW YouTube channel and the FLW Facebook page.