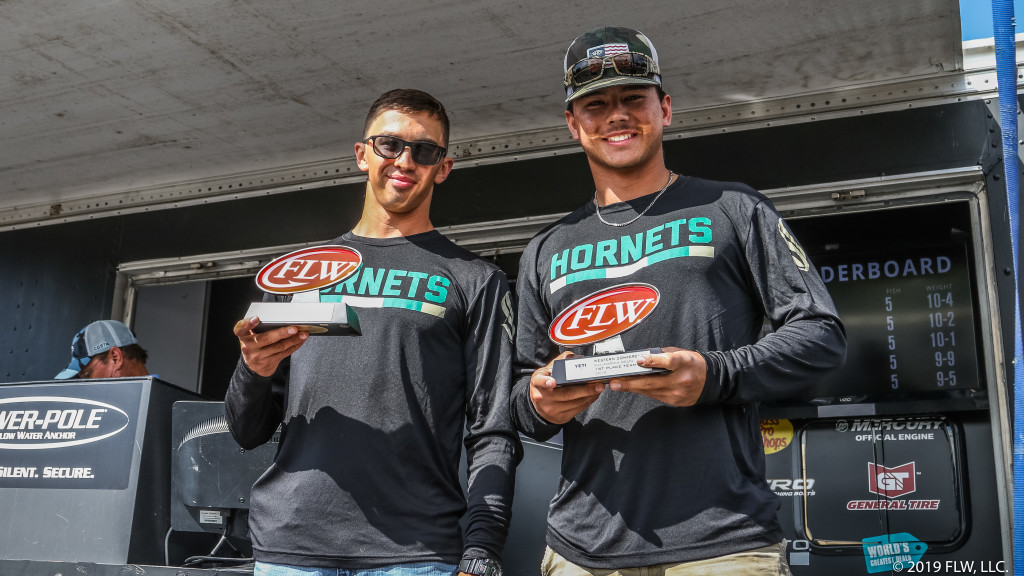 BETHEL ISLAND, Calif. – The Sacramento State University duo of Ilya Guryanov of West Sacramento and Will Karnthong, of Antioch, California, won the YETI FLW College Fishing event on the California Delta presented by Bass Pro Shops with a five-bass limit weighing 15 pounds, 7 ounces. The victory earned the Hornets’ bass club $2,000 and a slot in the 2020 FLW College Fishing National Championship.

“I’m a local, so I’ve spent a lot of time on the Delta and we definitely put in our practice time for this one,” said Karnthong, a freshman majoring in construction management. “We mainly stayed around the Central Delta – I had 10 to 15 spots where I knew we could catch fish. The name of the game for us was just covering a lot of water, then slowing down in the high-percentage areas.”

“We tried our best to find the big fish punching the grass – and we caught six – but those were all little guys,” said Guryanov, a sophomore majoring in nursing. “Our big fish came on a ChatterBait. We caught around 20 fish, but it was a slow day and we had to just grind it out.”

The duo’s main bait of choice was a green-pumpkin-colored Z-Man Evergreen ChatterBait Jack Hammer – Karnthong with a Z-Man Super Shad trailer and Guryanov with a Yamamoto Zeko trailer. They used a Big Texan-colored Reaction Innovations Sweet Beaver when punching.

“Being a local was a huge advantage for us, because we had more water to fish,” Karnthong went on to say. “A lot of teams were covering water and running and gunning, but I had pre-fished a lot and was able to go from spot to spot knowing that the fish were there, instead of looking for them.”