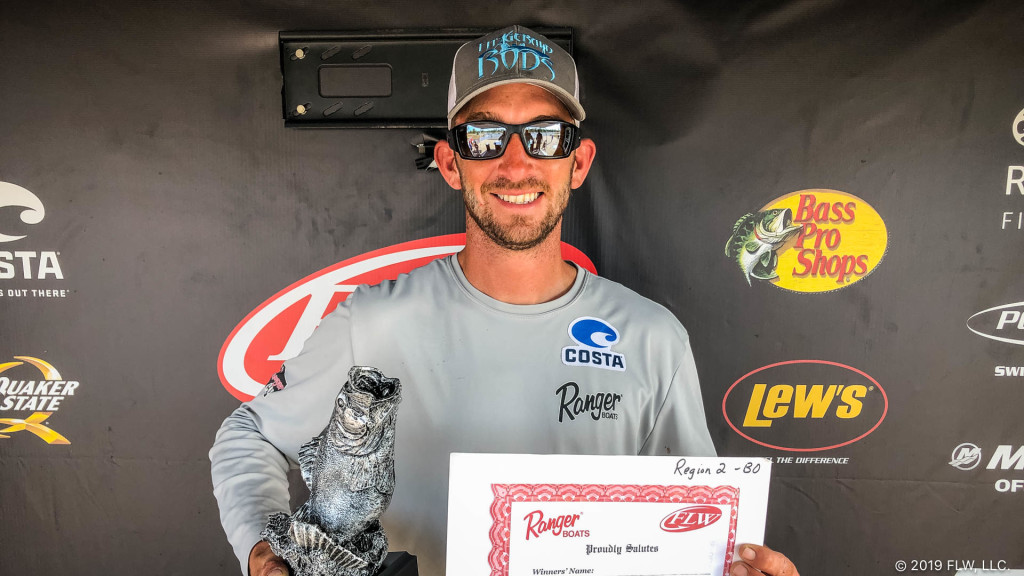 BAINBRIDGE, Ga. – Boater Bryan New of Belmont, North Carolina, brought a three-day total of 15 bass to the scale weighing 63 pounds, 4 ounces, to win the no-entry fee T-H Marine FLW BFL Regional Championship on Lake Seminole Saturday. For the win, New earned $71,200, including a new Ranger Z518L with a 200-horsepower Mercury or Evinrude outboard and automatic entry into the 2020 BFL All-American Championship, April 30-May 2, at Lake Hartwell in Anderson, South Carolina.

“I was mainly fishing in the Flint River,” said New, who earned his first win as a boater after three career victories as a co-angler in FLW competition. “I had a terrible practice, but I saw two or three fish in the grass on my side imaging and I figured that there was probably a bunch more in there. So I decided that was my best shot and chose to concentrate on the grass.

“I had 12 to 15 stretches of grass where I thought I could catch them,” New continued. “I had one little stretch that was the juice, though. I caught three keepers each day there. It wasn’t anything that special – just some sparse, topped-out matted clumps on the edge of a shallow bar on the river channel.”

New said that he wasn’t exactly sure what the difference maker was for him in comparison to the other competitors, but suspected it may have just been good timing.

“The weights make it look like I was really dialed in, but I wasn’t,” New went on to say. “I would get a few good bites early every day, and that kept my confidence level high. I wasn’t catching a ton of fish, though. I only had six bites the first day, seven the second day and six again on the third day. I was definitely scrambling.”

Bart Beasley of Mount Pleasant, South Carolina, weighed in 15 bass over three days totaling 28 pounds, 6 ounces to win the top co-angler prize package of $50,000, including a new Ranger Z518L with a 200-horsepower Mercury or Evinrude outboard.