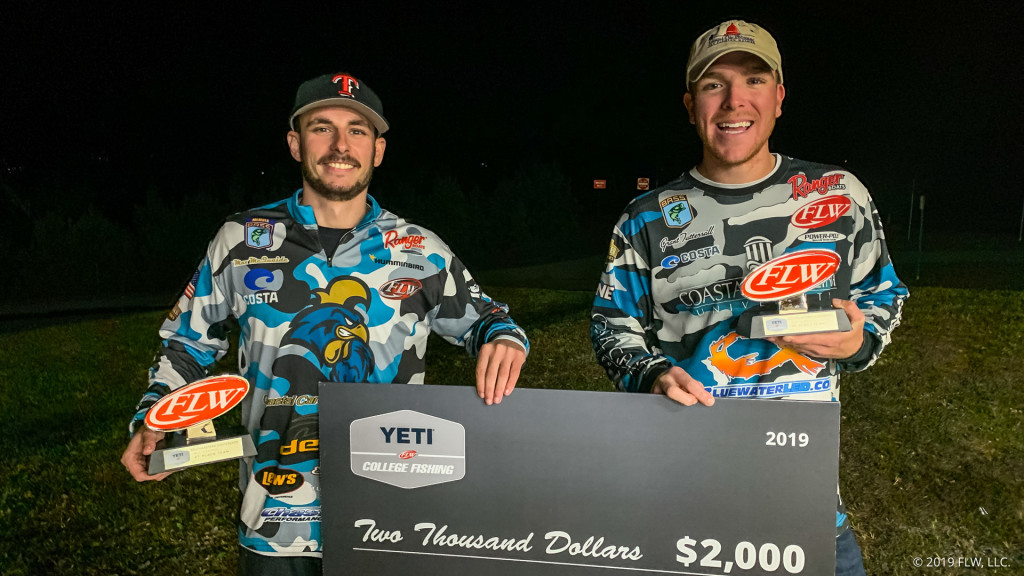 “We were able to get out on the water on Wednesday and Thursday for some practice time, and we spent 99% of that time side-scanning with our electronics and looking for points that had a lot of baitfish,” said McQuaide, a senior majoring in Marketing. “We had found seven or eight solid points that held fish, and we planned to just cycle through them and dial in the fish during the tournament.

“On tournament day, we drew boat No. 7 and were able to get to our best spot – a big flat alongside a point that was close to the main-river channel,” McQuaide continued. “We caught a couple of fish on the first spot, but then when we went to leave the outboard wouldn’t start. It ended up being a fuse in the engine, and was not something that we could fix on the water.

“As I was trying to diagnose the problem, Grant was on the trolling motor fishing off of the front of the boat and had caught a 3-pounder and a 2½-pounder, so we decided that the only thing that we could do was to just slow down and milk the area. We ended up winning the tournament on that one spot.”

The duo said that their key baits were a Lucky Craft spybait, a Strike King jerkbait, a swimbait and a green-pumpkin-colored football jig with a watermelon-colored Strike King Rage Twin Tail Menace Grub.

“I think we ended up catching around 12 keepers throughout the day,” said Tattersall, a senior majoring in Marine Science. “We fished shallow in the morning with the spybait and the jerkbait, then we moved offshore in the afternoon and threw the football jig and the swimbait and started getting some bigger bites.”

The duo credited their Lowrance electronics and their Navionics lake charts as being the key to their tournament win.

“To get the win after being forced to fish in one spot really makes it seem like this was meant to be,” said Tattersall. “The key was really our electronics. We had located a couple of deep boulders at the end of the point that the fish were really keyed on. Every time we’d bounce our bait off the boulders, we’d get a reaction bite. We never would have even seen them without our Lowrance graphs.”