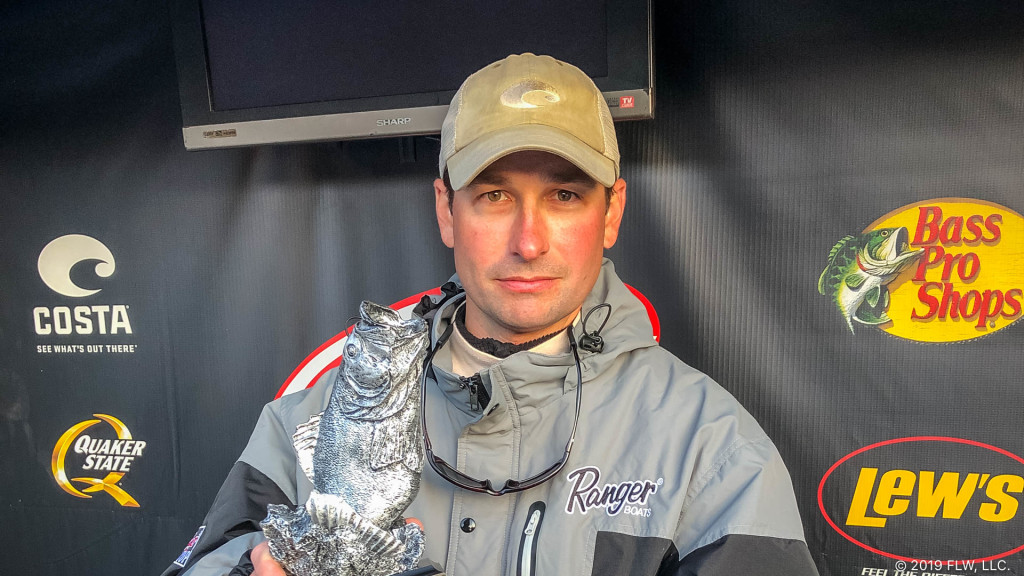 The BFL Wild Card tournament is a last-chance shot at the All-American for BFL anglers that didn’t qualify for a Regional Championship.

“I did not see that coming,” said Miller, a former FLW College Fishing angler who competed for Furman University. “I had a pretty decent practice and I thought I might be able to catch a good one each day. Maybe two. I certainly didn’t see 15 pounds coming two days in a row.”

Miller caught his fish targeting two different places on the north end of the lake, never fishing more than 10 miles south of the dam.

“I caught them pretty much out of two areas,” Miller said. “One produced real well on Friday, and I caught all my weight on the other spot on Saturday.”

On day one, Miller said he caught five largemouth with an umbrella rig and a shaky-head rig targeting a wind-blown riprap bank with deeper water. Casting right at the bank, he fished 7 to 12 feet deep. His second area was a big windblown flat that was about 5 feet deep. He caught three largemouth and two smallmouth there on Saturday.

“On Friday at the end of the day, I saw a 4-pounder come out of the water chasing a gizzard shad on that flat. I didn’t catch it, but I decided to start there the next day,” said Miller. “It was just a big flat, probably the size of two football fields, and it had isolated stuff on it – rock piles, stake beds and some dark spots. You’d run your bait across the top or drag it through and every once in a while you’d get a quality bite.”

Miller’s key bait on the flat was a structure jig.

“I caught a small one Saturday morning, and I thought that fish probably got me to the All-American. Then, a little later, I caught a few more, including a 4-11,” says Miller. “At that point I thought I had the tournament won, so I spent the rest of the day trying to help my co-angler out. When I got in, everyone was talking about an 18-pound bag of smallmouth, and as I was loading my fish I was sure I didn’t have enough.”

The 18-pound bag of smallmouth belonged to Illinois’ Brian Futch, who weighed in a five-bass limit totaling 18 pounds, 5 ounces. Alas, it was just a bit short, as Miller had enough to earn the victory by a razor-thin 1-ounce margin.

“I put a lot of work in to make this All-American,” Miller went on to say. “I live about 30 minutes up the road from Lake Hartwell, and I made it in 2018 as a co-angler. It is without a doubt the best tournament I’ve ever been to. It’s so much fun to be there, and now I’ve got a chance to go and do really well.”

Futch caught the biggest bass of the tournament in the Boater Division Saturday, a fish weighing 5 pounds, 5 ounces, which earned him the day’s Boater Big Bass Award of $81.

Hammond also caught the heaviest bass of the tournament in the Co-angler Division Saturday, a fish weighing 5 pounds, 4 ounces, which earned him the day’s Co-Angler Big Bass Award of $52.