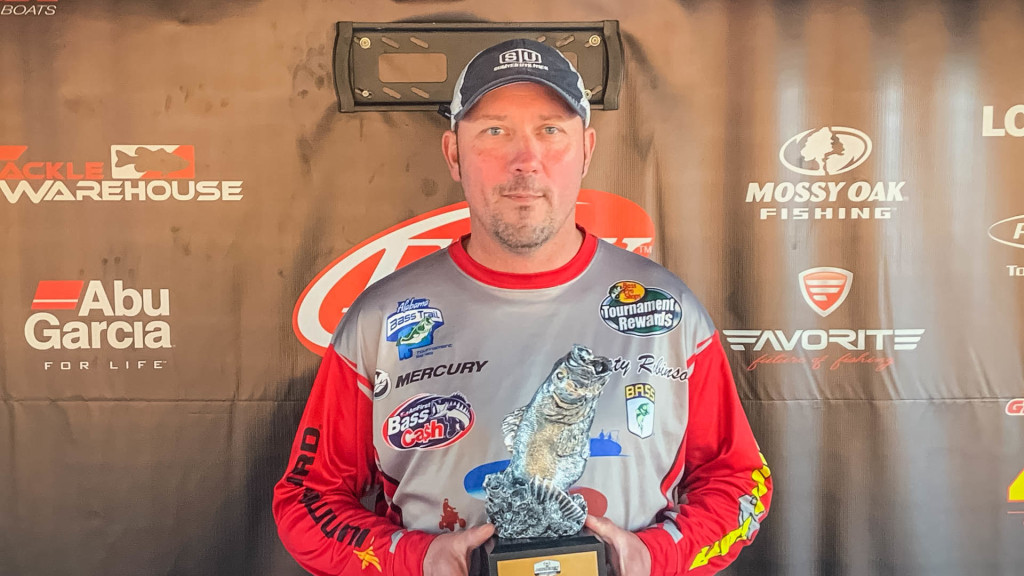 ALEXANDER CITY, Ala. – Boater Dusty Robinson of Eclectic, Alabama, brought a five-bass limit to the scale Saturday weighing 13 pounds, 4 ounces to win the 2020 Phoenix Bass Fishing League presented by T-H Marine event at Lake Martin in Alexander City, Alabama. For his victory, Robinson earned a total of $5,686, including a $1,000 Mercury contingency award.

“I started my day out with a spinnerbait in my hand, and I didn’t put it down throughout the entire day,” said Robinson, who earned his first career Phoenix Bass Fishing League victory. “I caught around 20 keepers all day long, fishing in the Hog Pen Slough area – around the D.A.R.E. Power Park.”

“I caught them anywhere from 6 inches to 8 feet deep,” Robinson said. “The Hog Pen Slough is a main feeder creek, about mid-river. I was targeting the blowdowns and rocky secondary points. If I didn’t get bit on the bank, I’d slow roll it all the way back to the boat.

“I’ve been battling against these hammers in the Bama Division for three years now, and I’ve been one bite away from the win a couple of times. It was shocking that the weights were this low – I didn’t expect to win – but it was an awesome day and I’m glad I did.”

Chris Rutland of Wetumpka, Alabama, brought a 4-pound, 3-ounce bass to the scale to win the day’s Boater Big Bass award of $690.

Frink took home an extra $500 as the highest finishing FLW PHOENIX BONUS member. Boaters are eligible to win up to an extra $7,000 per event in each Phoenix Bass Fishing League presented by T-H Marine tournament if all requirements are met. More information on the FLW PHOENIX BONUS contingency program can be found at PhoenixBassBoats.com.

Moore caught the largest bass in the Co-angler Division, a fish weighing in at 4 pounds even. The catch earned him the day’s Co-angler Big Bass award of $345.

The 2020 Phoenix Bass Fishing League presented by T-H Marine on Lake Martin was hosted by the Alexander City Chamber of Commerce. It was the opening event of five qualifying tournaments in the Bama division.

The top 45 boaters and co-anglers in the Bama division based on point standings, along with the five winners of each qualifying event, will be entered in the Oct. 8-10 Bass Fishing League Regional Championship on Lake Chickamauga in Dayton, Tennessee, hosted by the Rhea Economic and Tourism Council. Boaters will compete for a $60,000 prize package, including a new Phoenix 819 Pro bass boat with a 200-horsepower Mercury outboard and $10,000, while co-anglers will fish for a new 18-foot Phoenix bass boat with a 200-horsepower outboard.