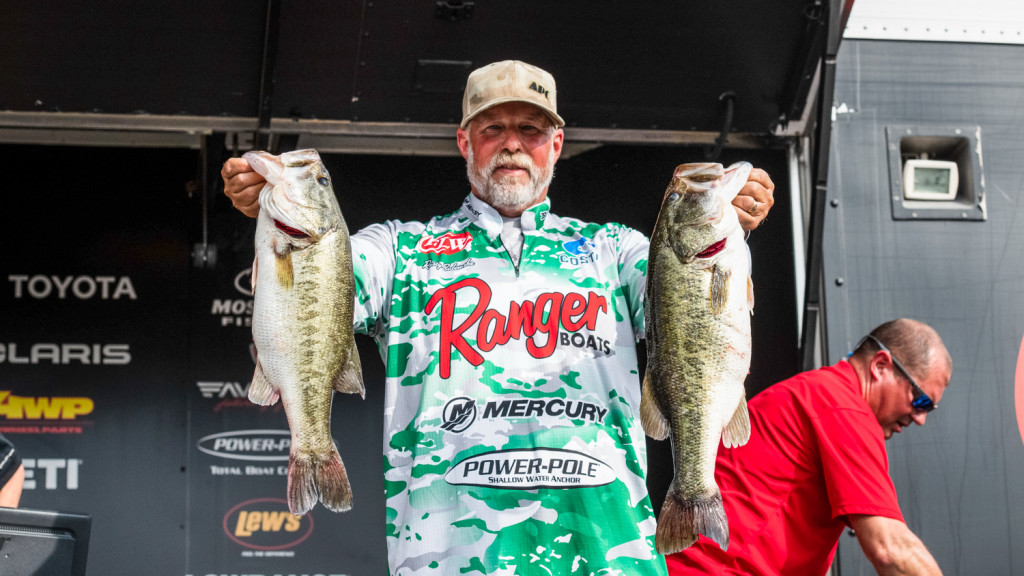 LEESBURG, Fla. – Pro Rusty Salewske of Alpine, California, brought a five-bass limit to the scale Thursday weighing 26 pounds, 10 ounces, to jump out to the early lead after Day One of the Tackle Warehouse Pro Circuit at the Harris Chain of Lakes presented by Bad Boy Mowers. Pro Miles Burghoff of Soddy-Daisy, Tennessee (26-8) and Jared McMillan of Belle Glade, Florida (22-1) are behind Salewske in second and third place as the four-day tournament, which features 154 of the world’s top bass-fishing professionals casting for a top prize of up to $135,000, heads into Day Two.

“Today was an amazing day,” said Salewske, who is fishing in his first season back at FLW’s top-level circuit since 2011. “I’m fishing an area – I call it offshore, but it’s not a long way offshore. I found the spot during the first day of practice and caught 15 fish there – a 6-pounder, two 4-pounders, and a bunch of little ones. The next two days there, I shook every fish off.

“I’m not a Florida guy and I don’t really know this place well enough to know exactly what they’re doing, but I think it is a staging area,” Salewske continued. “I had seven quality fish there today, and around 8:30 I culled out a 3-pounder with a 4-pounder and decided I needed to leave. I don’t know if there are more there, or if a school just swam up, or if they’re staging there. But I’ll find out tomorrow.”

Salewske said his key area was about 200 feet off the bank. His most effective baits were dark-colored Zoom Speed Worms, Zoom Trick Worms and a Zoom Brush Hog.

“After 8:30, I spent the day practicing and I found a secondary pattern that was working for me,” Salewske said. “I had four spots coming into this event that I thought could be good, but I only fished one today. Now, if those four are no good, I’ve got another pattern that I can run and I’m excited about that. You’ve got to be around fish to get bit – and I know I’m around them – so we’ll see what tomorrow brings. I can’t wait to get back out there.”

The top 10 pros after day one on the Harris Chain of Lakes are:

The Tackle Warehouse Pro Circuit at the Harris Chain of Lakes presented by Bad Boy Mowers is hosted by Lake County, Florida.

In Tackle Warehouse Pro Circuit competition, the full field of 154 pro anglers compete in the two-day opening round Thursday and Friday. The top 30 pros based on their two-day accumulated weight advance to Saturday. Only the top 10 pros continue competition Sunday, with the winner determined by the heaviest accumulated weight from the four days of competition.

For youth, the FLW Foundation’s Youth Fishing Derby will be held at the Venetian Gardens on Saturday, Feb. 22 from 1 p.m.-3 p.m. The event is hosted by Tackle Warehouse Pro Circuit anglers and is free and open to any youth 14 and under. Rods and reels are available for use, but youth are encouraged to bring their own if they own one. The 1st and 2nd place anglers that catch the biggest fish will be recognized Saturday on the FLW Pro Circuit stage, just prior to the pros weighing in. The first 50 youth registered will receive a free goodie bag. Youth can register on-site or pre-register by emailing [email protected].

The popular FLW Live on-the-water broadcast will air on Days Three and Four of the event, featuring live action from the boats of the tournament’s top pros each day. Host Travis Moran is joined by Toyota Series pro Todd Hollowell to break down the extended action each day from 8 a.m. to 2 p.m. On-the-water broadcasts will be live streamed on FLWFishing.com, the FLW YouTube channel and the FLW Facebook page.