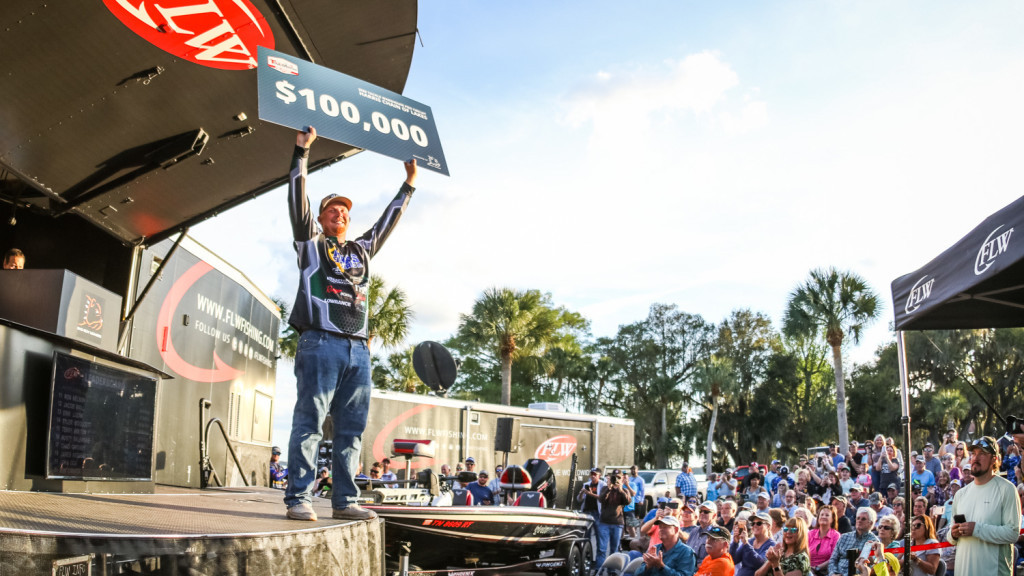 The tournament, originally scheduled for four days, was shortened to three after strong winds forced a postponement of competition on Friday. The full field of 154 anglers competed on Thursday and Saturday and only the top 30 anglers advanced to Championship Sunday.

“This is unbelievable – just as awesome as I always dreamed it was going to be,” said Strickland, a former FLW/TBF High School Fishing Florida State Champion fishing in just his second event as a professional on the Tackle Warehouse Pro Circuit. “If I was going to win just one, ever, in my whole career, I would have wanted it to be right here. There was so much family and friends here, the crowd was humongous. This still doesn’t even feel real.”

Strickland caught his fish this week fishing an area in Lake Griffin called the marsh. He described the marsh as “a 500- to 600-acre duck marsh, with hydrilla everywhere and full of cattails and hyacinth mats.” As a local angler he knew that big fish had been in there for months, and when he went there during the official practice period the big fish were still there.

“I caught them this week flipping mats with a Reaction Innovations Spicy Beaver (Tramp Stamp), but also added two big ones on a (Reaction Innovations) Machete Worm,” Strickland said. “Those were the only two baits I used all week – just flipped and threw that worm. I caught 12 fish on the first day. On the second day, I caught 8. Today I caught around 8 as well – they were just the right bites.”

“I fished fairly clean all week. I lost a couple that I really thought were going to haunt me, but my fish held up,” Strickland said. “I just kind of stuck in that area and luckily I had it all to myself this week.

“Two years ago, when the Pro Circuit was here, the boat that I won out of today was sitting in the parking lot as the demo boat for Ranger,” Strickland went on to say. “I bought that boat and here we are two years later. I’m on the big stage, and I won. I don’t even know what else to say. This has been surreal.”

The top 10 pros on the Harris Chain of Lakes finished:

Overall there were 145 bass weighing 366 pounds, 9 ounces, caught by the pros Sunday. Of the final 30 pros, 27 of them were able to bring a five-bass limit to the scale.

In normal Tackle Warehouse Pro Circuit competition, the full field of 154 pro anglers competed in the two-day opening round on Thursday and Friday. The top 30 pros based on their two-day accumulated weight advanced to Saturday. Only the top 10 pros continue competition Sunday, with the winner determined by the heaviest accumulated weight from the four days of competition. After Friday’s weather postponement the format was changed to a three-day event, the full field fished the first two days of competition (Thursday and Saturday) and the top 30 pros advanced to Sunday, the final day of competition.