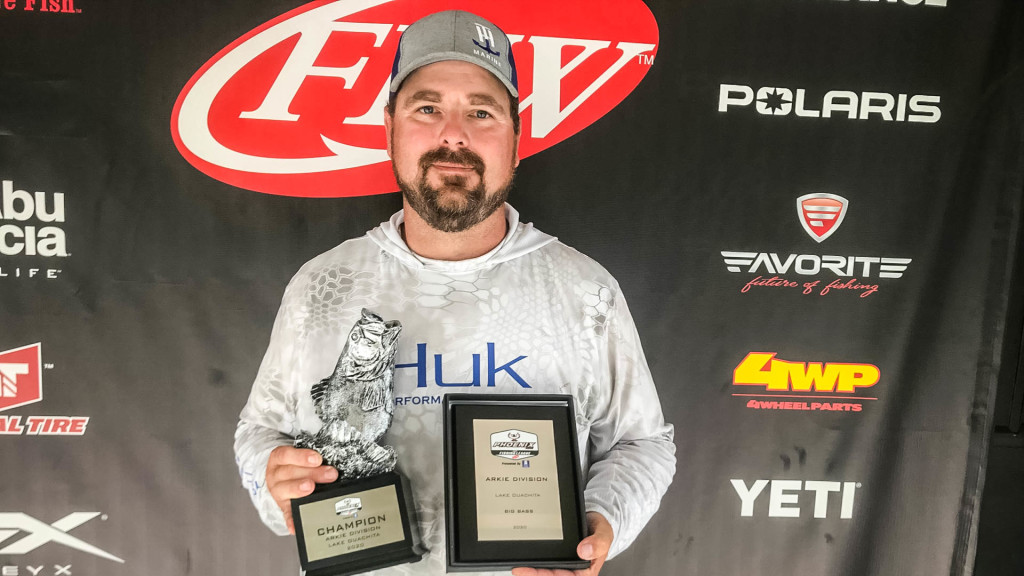 “I caught all of my fish on a white Strike King swimjig, running grass in Webb and Twin Creeks,” said Richmond, who earned his second career win in FLW competition. “I had all of my fish that I weighed in by 6:30 (a.m.). I caught a bunch of more small ones throughout the day, but I never could upgrade.

“The area that I was fishing had a creek channel really close. My boat was sitting in about 10 foot of water and it went up to about 3 to 4 feet at the edge of the grass,” Richmond continued. “I hadn’t practiced there, but I had fished it before and I was committed to that spot. I knew that if I stayed there long enough I could catch enough to win, and it only took 15 minutes.”

Richmond was ecstatic about earning the win in the tough Bass Fishing League Arkie division.

“This division is very hard to win as a boater. These guys are very good, and we fish all different types of water – clear-water reservoirs, rivers – so it’s hard to beat these guys,” Richmond went on to say. “I’ve been fishing BFL events since 2005 and this is my second trophy. I’ve been to the All-American once, and I really want to make it back.”

Richmond caught brought a 5-pound, 3-ounce bass to the scale to add the day’s Boater Big Bass award of $515 to his winnings.

Busby was the highest-finishing FLW PHOENIX BONUS member and took home an extra $500. Boaters are eligible to win up to an extra $7,000 per event in each Phoenix Bass Fishing League presented by T-H Marine tournament if all requirements are met. More information on the FLW PHOENIX BONUS contingency program can be found at PhoenixBassBoats.com.

Choate caught the largest bass in the Co-angler Division, weighing in at 3 pounds, 9 ounces. The catch earned him the day’s Co-angler Big Bass award of $123.

The 2020 Phoenix Bass Fishing League presented by T-H Marine on Lake Ouachita was the fourth of five qualifying events in the Arkie Division.