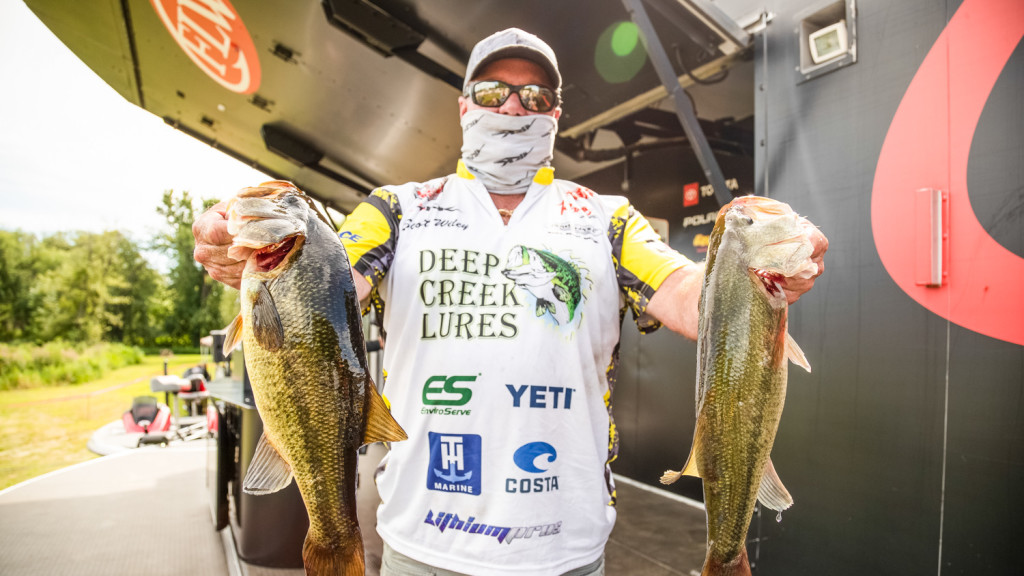 LA CROSSE, Wis. – Wiley, Alabama’s Scott Wiley brought a five-bass limit to the scale Wednesday totaling 15 pounds, 3 ounces, to take the early lead on day one of the Tackle Warehouse Pro Circuit at the Mississippi River presented by OPTIMA Batteries in La Crosse, Wisconsin. Wiley will bring a slim 5-ounce advantage into day two of the four-day Super Tournament that features 200 of the world’s best bass-fishing anglers from FLW and Major League Fishing (MLF) competing for a top cash award of up to $160,000.

“I’m happy to be leading, but there is still a lot of fishing left to do,” said Wiley, an eight-year FLW pro with two career top-10 finishes. “I’m having to hit a lot of places, just hopscotching around and catching one here, one there. I’m on a pattern and I hope that what I’m doing can hold up.

“I went to Pool No. 9 this morning,” Wiley continued. “My first area that I went to, I struck out. I ran around a little bit, then went over to this little drain and I caught a limit in about 45 minutes. I locked back up to Pool No. 8 and caught two big ones this afternoon – both around 3½ pounds – and that was pretty much my day.”

Wiley’s limit consisted entirely of largemouth bass. Although he is unsure of whether his pattern can hold up over multiple days, he remains optimistic heading into the second day of competition.

“The guys in this event are good, and you’ve got to do whatever you can to stay on top of the fish,” Wiley went on to say. “I don’t know if I’ve got a lot of fish left down there (Pool No. 9), but we’re going to go down there and see what we can do with them.”

The top 10 pros after day one on the Mississippi River are:

Kevin Meeks of Smyrna, Tennessee, won Wednesday's $500 Berkley Big Bass award in the pro division after bringing a fish weighing 5 pounds even to the scale.

In Tackle Warehouse Pro Circuit Super-Tournament competition, the full field of 200 pro anglers compete in the two-day opening round on Wednesday and Thursday. The top 50 pros based on their two-day accumulated weight advance to Friday. Only the top 10 pros continue competition on Championship Saturday, with the winner determined by the heaviest accumulated weight from the four days of competition.

MLF pros competing in the Pro Circuit “Super Tournaments” will fish for prize money only. No points will be awarded toward any championship or title to MLF competitors. Only the original Tackle Warehouse Pro Circuit anglers will compete for the AOY title throughout the remainder of the season. AOY points in the final events will be awarded based on Pro Circuit anglers finishing order. The top-finishing FLW pro will receive “first-place points” regardless of where he finishes in the overall standings, and so on.

Anglers will take off at 7 a.m. CDT each day from Stoddard Park, located at 502 Forest Lane, in Stoddard. The weigh-in each day will also be held at Stoddard Park and will begin at 3 p.m. on Wednesday and Thursday and at 4 p.m. on Friday and Saturday. Attendance is limited to competing anglers and essential staff only. Fans are encouraged to forgo the daily takeoffs and weigh-ins and follow the event online through the expanded four-day “FLW Live” on-the-water broadcasts and weigh-in coverage at FLWFishing.com.