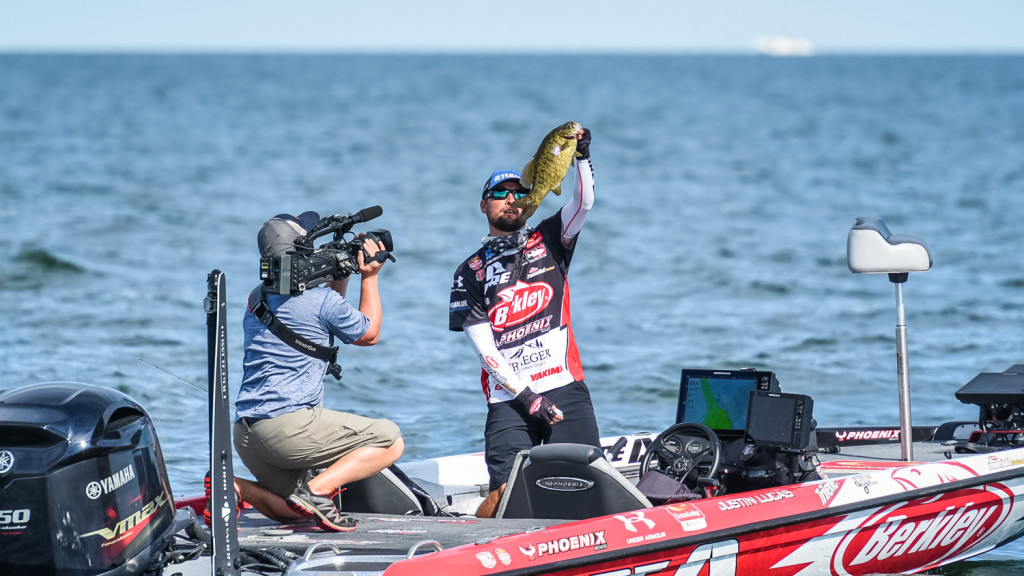 SANDUSKY, Ohio – Major League Fishing (MLF) pro Justin Lucas of Guntersville, Alabama, brought a five-bass limit to the scale Wednesday weighing 19 pounds, 14 ounces, to take the lead after day two of the Tackle Warehouse Pro Circuit at Lake Erie in Sandusky, Ohio. Lucas’ two-day total of 10 bass weighing 41-5 gives him a slim 3-ounce advantage heading into day three of the four-day Super Tournament that features 187 of the world’s best bass-fishing professionals from FLW and MLF angling for a piece of $1.3 million, including the first-place prize of up to $160,000.

The 2016 Phoenix Bass Fishing League All-American Champion Jeremy Lawyer of Sarcoxie, Missouri, sits in second place, just 3 ounces behind Lucas with 41-2. Pro Alton Jones Jr. of Lorena, Texas, has a two-day total of 40-13, good for third place, while day one leader Arizona’s Josh Bertrand fell to fourth with a two-day total of 39-14. The field is now cut to 50 for Thursday’s competition with only the top 10 anglers advancing to Championship Friday.

“It looks really good on the scales, but it was not easy,” said Lucas, who won the final MLF Bass Pro Tour event of the season last month in Sturgeon Bay, Wisconsin. “I only had seven keeper bites today, and I lost two of them. I only put five keepers in the boat and I never culled one time. So, it looks good but it was really tough to get there today.”

Lucas said that he spent the day hunting for active smallmouth that are ready to feed.

“They’re hard to find, but there are a few out there,” Lucas said. “Most of mine are coming on my 2D sonar. I think they’re attracted to the boat. I see them come up under the boat and then I drop straight down onto them. It can be awhile, between bites, though. Today it was hours.”

Lucas said that all of his fish came on a Berkley PowerBait Maxscent Flat Worm, and that he is “all in” on his spots.

“I don’t really have a backup plan,” Lucas said. “I do have one other area that I haven’t hit yet, but I don’t think the fish are as big there. I think 18 pounds would be a good bag there, but I think it’ll take 20 pounds a day to win this thing.

“I’m trying to stay away from the crowd – there just isn’t enough fish out there to go around,” Lucas went on to say. “I have a lot of confidence here in the summer, though. I know I can find some little sweet spots out there.”

The top 20 pros after day two on Lake Erie are:

Anglers were also vying for the prestigious 2020 Tackle Warehouse Pro Circuit Angler of the Year (AOY) title that is determined by the most points accumulated over the six Pro Circuit events in 2020.

Pro Ron Nelson of Berrien Springs, Michigan, the 2019 Polaris Rookie of the Year, clinched the 2020 AOY title Wednesday, after bringing in a limit and ending the day in 18th place. Nelson can finish no worse than 50th place, which clinches the title for the Michigan pro after bringing a 73-point lead into the event. Nelson will receive his entry fees paid for the entire 2021 Tackle Warehouse Pro Circuit season for his win.

Nelson also won the $500 Berkley Big Bass award Wednesday in the pro division after bringing a 6pound largemouth to the scale.

The Tackle Warehouse Pro Circuit Super Tournament at Lake Erie is hosted by the City of Sandusky and the Lake Erie Shores & Islands Welcome Center. The total purse for the event is more than $1.3 million, including a top prize of up to $160,000.

In Tackle Warehouse Pro Circuit Super Tournament competition, the full field of 187 pro anglers competed in the two-day opening rounds on Tuesday and Wednesday. Now, the top 50 pros based on their two-day accumulated weight advance to Thursday. Only the top 10 pros will continue competition on Championship Friday, with the winner determined by the heaviest accumulated weight from the four days of competition.

Anglers will take off at 7 a.m. EDT each day from the Shelby St. Public Boat Launch, located at 101 Shelby St., in Sandusky. The weigh-in each day will be held at the Paper District Marina, located at 611 W. Shoreline Drive, beginning at 4 p.m.