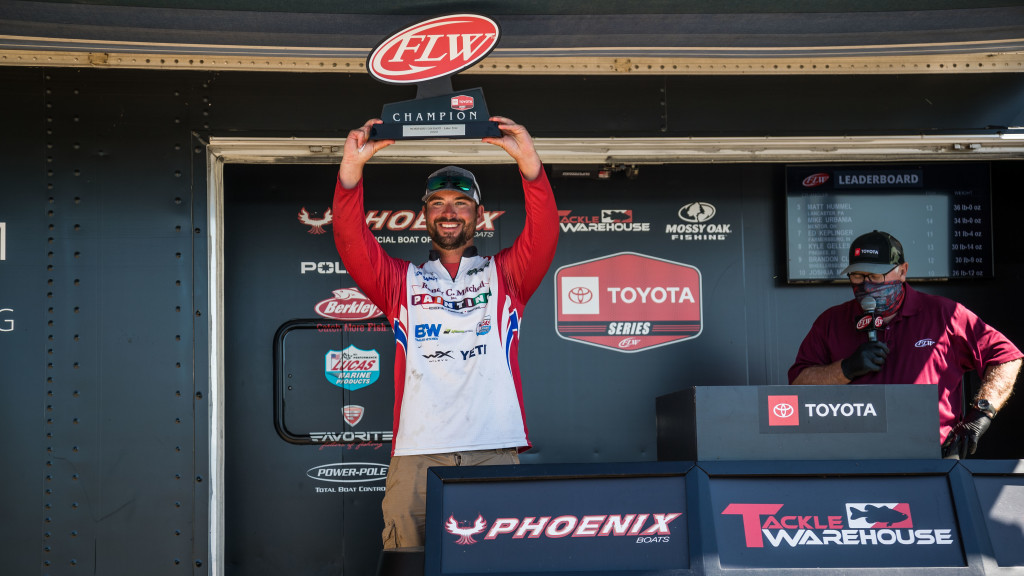 “Today was a nail biter, I really thought I only had like 12½ pounds,” said Mitchell, who pushed his career earnings to more than $250,000. “It really hasn’t sunk in yet. Right now, I just feel relieved. I really thought I blew a 6-pound lead. That would have been horrible.

“I thought I was going to catch them today,” Mitchell continued. “The wind changed directions today, and it was really cool last night. It felt like a really high-pressure day, and they weren’t eating. I had two bites in the morning, and they were eating weird, they would sit and tap and tap a drop-shot or a Ned rig and not suck it in. It was bad, it was horrible, I lost like two or three big ones and broke off like six fish today.”

Mitchell had two primary patterns throughout the week – one was a rock jetty underwater and the other was a series of hard spots. Today, the rock jetty was almost a deal-breaker.

“The gobies were in there thick today, and the smallmouths were picking at my drop-shot just like the gobies,” says Mitchell. “So, I would really let them have it, and the gobies would take my bait right into the rocks, and if the bass would bite after, I would snap off every time.”

Mitchell’s primary bait was a drop-shot with a Yamamoto Shad Shape Worm in blue pearl silver flake in stained water and natural shad in clearer water. On days one and two, he used a 3/8- and a ½-ounce weight, but lighter wind and a tougher bite saw him downsize to a ¼-ounce weight today. Mitchell also used a Ned rig with a 1/8-ounce Picasso Rhino Ned Head and a shortened Yamamoto Senko in the crushed goby color.

Mitchell hails from Delaware, which is not really known for its smallmouth, but he’s got a real knack for the Great Lakes.

“I have a really good feel for when smallmouth get pressured,” said Mitchell. “It lets me know when to go or stay, or when to slow down. At Buffalo last year, I was throwing a (Strike King) Z Too in practice, and they were crushing it. As soon as a bunch of boats rolled into that area, they quit biting it, and I downsized my baits and ended up catching 20 pounds.

“I’m not an expert by any means, but I can usually find a couple areas and pound them out.”

Cosculleula took home an extra $1,000 as the highest finishing FLW PHOENIX BONUS member. Boaters are eligible to win up to an extra $35,000 per event in each Toyota Series tournament if all requirements are met. More information on the FLW PHOENIX BONUS contingency program can be found at PhoenixBassBoats.com.