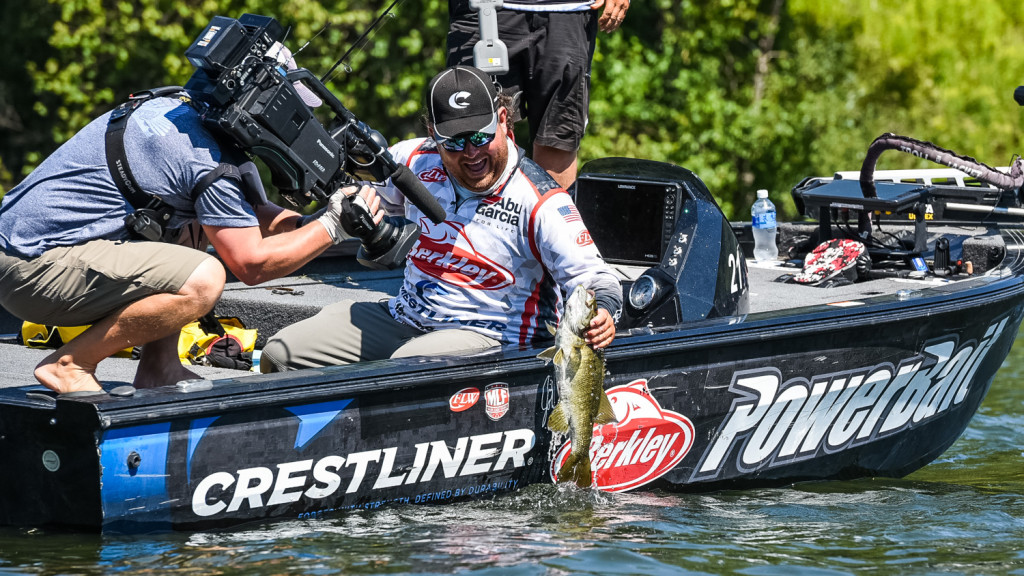 STURGEON BAY, Wis. – Pro angler John Cox of DeBary, Florida, is having a heck of a week. Fresh off of a third-place finish at a major tournament on Lake St. Clair last weekend, Cox drove straight to Sturgeon Bay to compete in the Tackle Warehouse TITLE presented by Toyota, the FLW Pro Circuit Championship. Despite having absolutely no practice time for the event, Cox caught 18 bass weighing 66 pounds, 5 ounces, Tuesday to lead Group B after their first day of competition.

The tournament, fished using the Major League Fishing (MLF) catch-weigh-immediate release format, saw a steady stream of smallmouth bass caught by the 25 pros on the water Tuesday, with anglers catching a total of 243 bass weighing 784 pounds, 6 ounces. Pro Spencer Shuffield of Hot Springs, Arkansas, who finished the season ranked No. 2 in the Angler of the Year standings, sits in second place with 19 bass totaling 61-2 – just 5 pounds, 3 ounces behind Cox.

“Coming off of the water today, I feel like I might have had a mild heart attack,” Cox joked. “It was so intense – all the way to the last second. There was no letting up – guys were catching them, bouncing out of the lead, then back into the lead, it was incredible. I had a lot of fun today.

“When we first started, I was really worried,” Cox continued. “They started catching them, instantly. I got the first SCORETRACKER® update 15 minutes in and guys had 4- and 5-pounders already and I hadn’t even had a bite. I was thinking, ‘Uh oh… no practice. This is going to be really bad.’ But then I found something where we actually got a bite and then we just hammered down and caught everything that we could.”

“I don’t catch a lot of smallmouth, normally, but the Berkley MaxScent is definitely the key to catching a lot,” Cox said. “I was mixing it up with the Flat Worm and the Flatnose Minnow, and I even ended up throwing the General some.

“I just tried to catch as much as I could today, because I know how much they move around and they could be gone when we get back out there,” Cox went on to say. “I really wanted to catch at least 60 pounds, so now on Thursday I’m going to have to figure out if I should go practice and fish new stuff or if I try to protect that area.

“With a day off to think about it, I’m going to be a wreck tomorrow. I’m ready to get back out there right now.”

The top 10 pros after day two (Group B) on Sturgeon Bay are:

Reehm caught the largest fish of the day Tuesday – a 5-pound, 11-ounce smallmouth bass. If that bass remains the largest weighed from Group B after Thursday’s competition, Reehm will take home the $500 Berkley Big Bass Award.

Unique to the TITLE Championship, the event is being fished using the MLF catch-weigh-immediate release format. A select group of 25 pros (Group A) will compete on Days 1 & 3 (Monday & Wednesday), with the other 25 pros (Group B) competing on Days 2 & 4 (Tuesday & Thursday). The top-10 pros from each group based on their cumulative two-day total will advance to Day 5 (Friday). Only the top 10 pros will continue on to the sixth and final day of competition Saturday, with the winner earning the inaugural Tackle Warehouse TITLE Championship Belt presented by Toyota.

The 2020 Tackle Warehouse Pro Circuit featured a field of 150 of the top professional anglers in the world competing at six regular-season events around the country. The top 50 anglers in the Angler of the Year (AOY) standings after the six events qualified t/o compete in this event, the inaugural Tackle Warehouse TITLE presented by Toyota.