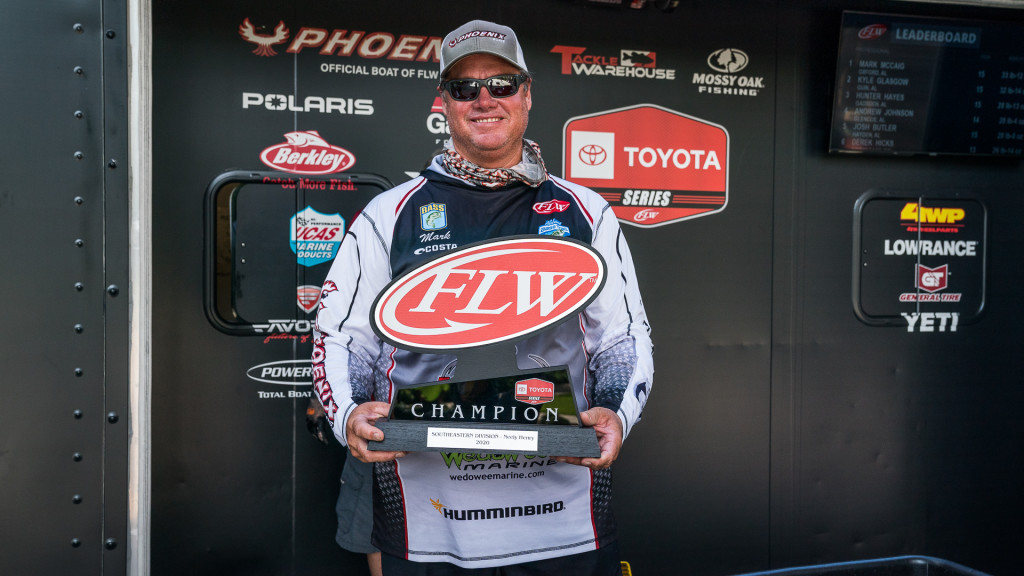 GADSDEN, Ala. – Boater Mark McCaig of Oxford, Alabama, brought a five-bass limit to the scale Friday weighing 10 pounds, 3 ounces, to win the three-day Toyota Series at Neely Henry Lake in Gadsden, Alabama. McCaig’s three-day total of 15 bass weighing 33-12 earned him the win by a 14-ounce margin over second-place angler Kyle Glasgow of Guin, Alabama, and earned McCaig the top payout of $57,690, including the lucrative $35,000 FLW PHOENIX BONUS contingency award, in the third and final tournament of the 2020 Toyota Series Southeastern Division.

McCaig said that he knew, from generation schedules, that current would not be present in Neely Henry until noon each day. With a check-in time of 2:30 during the tournament, that gave him just 2 hours of prime fishing time to work current related areas. The question became what to do with the other five hours.

“The thing I tried to be better about in this event was not going down the lake to those current spots too early,” McCaig said. “If I jumped the gun and ran them too early and they didn’t work, I might get frustrated too soon.”

Instead, McCaig decided to play a game of run and gun with his intuition early in the day, even fishing places where he's ever cast a lure before.

“I caught several fish this week in places I didn’t even know existed,” he said. “Anything I caught before noon was all a bonus.”

Several of those “bonus fish” came from skipping a SPRO Bronzeye Poppin' Frog up under overhanging bushes that were casting shade. Another bonus fish pattern was running and gunning docks, pitching a Big Bite Baits Fighting Frog. McCaig has several pet docks that he knows work when the current is running, but wanted to run docks he had never fished before in hopes of finding a pleasant surprise.

“For most of the mornings, I just junk fished, running shade with the floating frog and the Fighting Frog,” he says. “That helped get a few solid keepers in the boat before the current came on.”

Once the current started running, McCaig moved to more of his tried and true docks, rock points and shallow offshore sweet spots that collect current-driven debris like logs. He also switched to a square-bill crankbait to work the eddies formed by the debris.

“I caught most of my fish after noon in current,” he says. “But I would not have won the tournament without catching a few key fish early just running around junk fishing shade on places I have never been and that’s what feels good about this event.”

The Toyota Series at Neely Henry Lake was hosted by the City of Gadsden and Greater Gadsden Area Tourism. It was the third and final regular-season tournaments in 2020 for Southeastern Division anglers. The next event for Toyota Series anglers will take place next week, Sept. 10-12 – the Toyota Series at the Potomac River in Marbury, Maryland. For a complete schedule, visit FLWFishing.com.