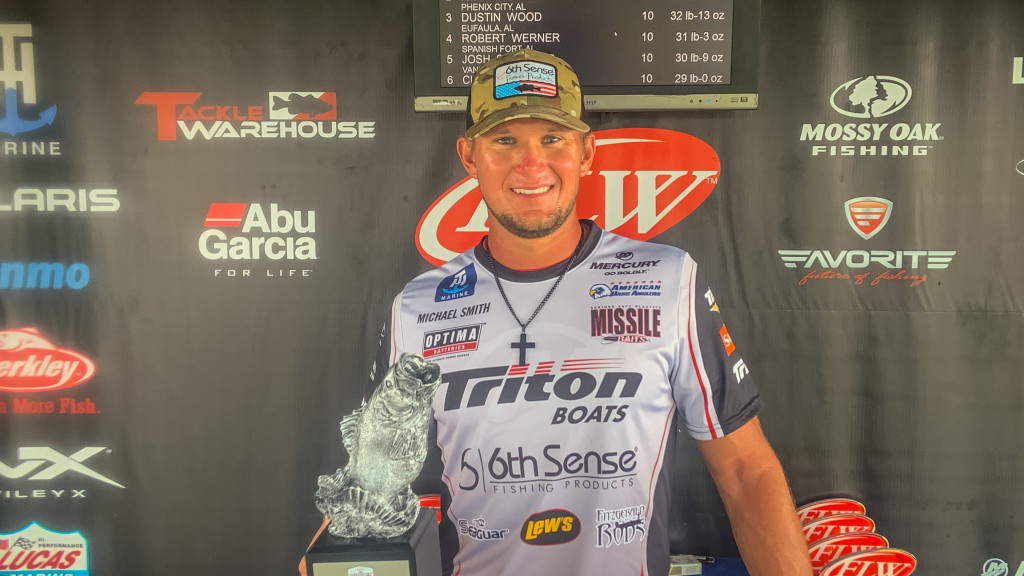 “The key to this win was running as many places as I could where I had found big fish over the past couple months,” said Smith. “I probably pulled the trolling motor up more than fifty times today and the key was to just keep moving.

“Almost every fish I caught this weekend was on the first or second cast on a spot, so if I’d made five casts and hadn’t caught one, I’d move somewhere else,” Smith continued. “I spent a lot of time practicing up here and finding as many places as I could and it certainly paid off.”

Smith said this was his third BFL win and he was excited to get a win on one of his home lakes.

“Out deep I was cranking a 6th Sense C20 and C15 Crankbait in a custom color, so I had something a little different than anyone else on the lake,” Smith said. “I’ve run my Mercury outboard all over this place the past two days. Having great equipment definitely helps, as well as using products you’re confident in and trusting what you’ve got.”

Batts took home an extra $500 as the highest finishing FLW PHOENIX BONUS member. Boaters are eligible to win up to an extra $7,000 per event in each Phoenix Bass Fishing League presented by T-H Marine tournament if all requirements are met. More information on the FLW PHOENIX BONUS contingency program can be found at PhoenixBassBoats.com.

Garrett Brown of Trion, Georgia earned the win in the Co-angler Division Saturday after catching a two-day total of eight bass weighing 20 pounds,11 ounces. Brown earned $2,658 for his victory.

Girdner earned the event’s Co-angler Big Bass Award of $334 with a fish weighing in at 5 pounds, 9 ounces.

The 2020 Phoenix Bass Fishing League presented by T-H Marine on Lake Eufaula was the fifth and final qualifying event in the 2020 Bama Division.

Now the top 45 boaters and co-anglers in the Bama Division based on point standings, along with the five winners of each qualifying event, will advance to the Oct. 8-10 Phoenix Bass Fishing League Regional Championship on Lake Chickamauga in Dayton, Tennessee, hosted by Rhea Economic and Tourism Council. Boaters will compete for a $60,000 prize package, including a new Phoenix 819 Pro bass boat with a 200-horsepower Mercury outboard and $10,000, while co-anglers will fish for a new 18-foot Phoenix bass boat with a 200-horsepower outboard.