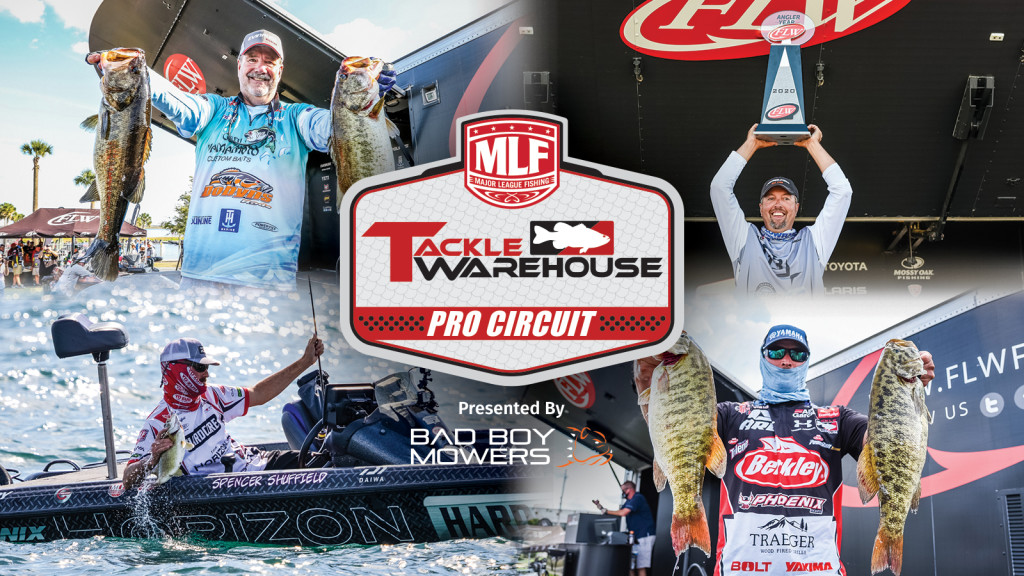 “We are extremely excited about the combined star power of the anglers on the 2021 MLF Tackle Warehouse Pro Circuit roster,” said Daniel Fennel, MLF Senior Director of Tournament Operations. “Combining Bass Pro Tour pros with seasoned Pro Circuit veterans and a fantastic class of rookies from across the country, we expect 2021 to be one of the most highly competitive seasons in our 26-year history.”

The 2021 MLF Tackle Warehouse Pro Circuit roster features a solid field of tournament veterans, including the return of bass-fishing legend Larry Nixon – after recovering from shoulder surgery – and multiple former FLW Cup champions including Darrel Robertson (1999), Dion Hibdon (2000), Anthony Gagliardi (2014) and Brad Knight (2015). They will be joined by John Cox, the 2016 FLW Cup champion who recently accepted his invitation to the MLF Bass Pro Tour, and 19 other Bass Pro Tour anglers who are taking advantage of the opportunity to fish upwards of 20 pro-level events between the two circuits.

The field will be showcased throughout six regular-season tournaments, with competition kicking off on Lake Okeechobee, Feb. 11-14, in Clewiston, Florida, and culminating with the 2021 MLF Tackle Warehouse TITLE championship on the Mississippi River, Aug. 17-22, in La Crosse, Wisconsin.

“It’s going to be fun getting back with many of my old friends and going tournament fishing again,” said Nixon, who is returning in 2021 for his 43rd year of fishing professionally. “I had surgery on January 6th last year and thought I’d be able to come back after six months and fish in the last tournament or two of the season, but that didn’t work out. I really missed my friends and the competition and am looking forward to a great year. I’m excited to go back to Lake Okeechobee, Smith and Murray – this is a stellar tournament schedule all the way around.”

The 2021 MLF Tackle Warehouse Pro Circuit will have 154 two-hour airings on network television, in a run that includes 24 airings on Outdoor Channel and 130 airings on Sportsman Channel, for a total of 308 hours of television programming.

Traditional weigh-in livestream coverage will be combined with live-on-the-water coverage across 11 cameras on each of the final two days of each regular-season competition and all six days of the Tackle Warehouse TITLE. Fans can catch 108 hours of live action as it unfolds on MajorLeagueFishing.com

“I’m really excited about the 2021 schedule,” said Gagliardi, MLF Bass Pro Tour angler and one of a few anglers who has won both an FLW Cup and AOY title. “I’ve always liked starting out the year on Lake Okeechobee in Florida – so many of us have history and familiarity there. Smith Lake is also a fun tournament lake and one I’ve had good success on. The opportunity to fish my home lake, Lake Murray, was a big factor in my choice to fish the Pro Circuit in addition to the Bass Pro Tour.

“I’ve never fished two pro tours consecutively, so it will be a lot of fishing for me, but I feel like this is a great opportunity. I think both tours create a great schedule all the way around, and I’m looking forward to getting after it in 2021.”

About MLF5
MLF5 is part of MLF, the world’s largest tournament-fishing organization. It provides anglers of all skill levels the opportunity to compete for millions in prize money across five tournament circuits featuring a five-biggest-fish format. Headquartered in Tulsa, Oklahoma, with offices in Benton, Kentucky, MLF and its partners conduct more than 290 bass-fishing tournaments annually around the world, including the United States, Canada, China, Italy, South Korea, Mexico, Namibia, Portugal, South Africa, Spain and Zimbabwe.