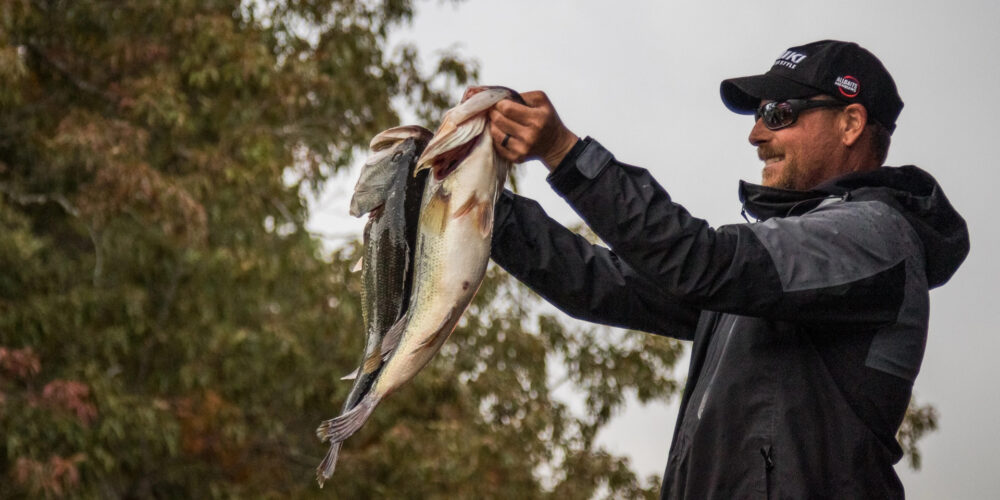 COUNCE, Tenn. – A tournament field of 198 boats – each featuring a pro and a co-angler – began their three-day, no-entry-fee competition for a top cash award of up to $235,000 at the Toyota Series Championship Presented by Guaranteed Rate at Pickwick Lake in Counce, Tennessee Thursday. The bass-fishing championship, hosted by the Hardin County Convention and Visitors Bureau, is the culmination of the 2021 Toyota Series Presented by A.R.E. season.

“Today went a little better than I thought it would go, seeing as I didn’t catch any big ones in practice,” said Thrift. “I thought a good day would be 10 to 12 pounds on six keeper bites and I think I ended up catching seven keepers today, but that was pretty much it. It definitely wasn’t an easy day.

“I started in a spot where I thought I could catch a couple early, and I did, but after that it was a struggle. I ran 40 miles up and fished my way back – I burned a lot of gas today.”

Thrift said he has seen Pickwick plenty of times in the spring and summer over the years, and though he’s had success on other parts of the Tennessee River in the fall, Pickwick in the fall was all new to him.

“This is my first time being here this time of year and it’s really not as good as I thought it would be,” said Thrift. “I thought it would be easier to get bites, but it isn’t. I don’t know if it’s pressure on the fishery, the weather or what’s going on. My day looks good on paper, but I have no idea what I’m doing.”

Despite his lack of experience on the fishery this time of year, Thrift is a quick study. With a couple big bites today, there’s a good possibility he can repeat his good day tomorrow.

“I was shocked at the two 6½-pounders I caught today,” said Thrift. “I didn’t expect that at all, but it gave me some ideas for tomorrow.”

Although Thrift has a stellar record in bass-fishing, with many big wins, he has yet to win a Toyota Series Championship in his career and said he is looking forward to the opportunity this week.

The top 20 pros after Day One on Pickwick Lake are:

The top 20 Strike King co-anglers after Day One on Pickwick Lake are:

Anglers will take off daily at 7 a.m. CT from Pickwick Landing State Park, located at 120 Playground Loop, in Counce. Weigh-ins will also be held at the park and will begin at 3:15 p.m. Outdoor vendors will be onsite prior to weigh-in on Friday from 1 to 3 p.m. and Saturday from 11 a.m. to 3 p.m.

Fans are welcome to attend the event or follow the action online through the “MLF Live” weigh-in broadcasts and daily coverage at MajorLeagueFishing.com. The 2021 Toyota Series Championship Presented by Guaranteed Rate will premiere on the Outdoor Channel at 5 p.m. ET on Jan. 15, 2022, with additional airings to follow on the Sportsman Channel.

The full field of anglers compete on Days 1 and 2 of the event, with the top 10 pros and top 10 Strike King co-anglers based on cumulative weight from the first two days continuing to the third and final day. The 2021 Toyota Series champions will be determined by the heaviest three-day total weight.

The 2021 Toyota Series Championship features the top 25 pros, top 25 Strike King co-anglers and tournament winners from each of the six divisions; the top 12 pros and 12 co-anglers from the Wild Card division; the highest finishing boater and co-angler from each of the six Phoenix Bass Fishing League Presented by T-H Marine Regionals and the Wild Card at the All-American; the top three teams from the College Fishing National Championship; High School Fishing National Champions; TBF National Champions; and MLF International champions from Canada, Italy, Korea, Mexico and Zimbabwe.