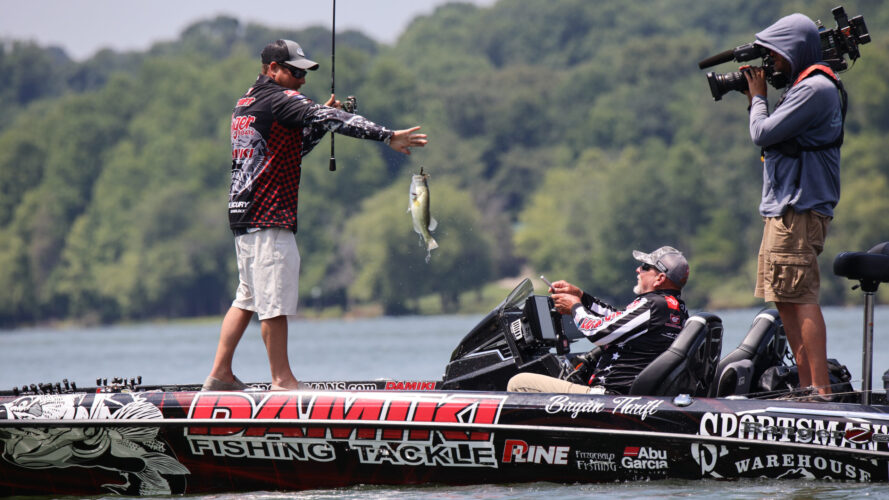 SPRING CITY, Tenn. – It was a fight to the finish on Sunday – with a mere 1-pound, 12-ounce separation between the top five pros as the competition day concluded – yet Bryan Thrift of Shelby, North Carolina, persevered to grab the early lead for Group B on Day 2 of the General Tire Stage Five on Watts Bar Lake Presented by Covercraft in Spring City, Tennessee.

Water was pulled from the fishery late in the day, creating a stronger current that enhanced the afternoon bite and produced a third period flurry for several anglers. Favorite Fishing pro Dustin Connell of Clanton, Alabama, made the biggest afternoon waves on SCORETRACKER®, starting the final period in 38th place before catching 10 bass weighing 19-13 in Period 3 to finish the day in sixth place.

The fifth stop on the 2022 Bass Pro Tour features 80 of the top professional bass-fishing anglers in the world competing for a total purse of $805,000, including a top cash prize of $100,000 to the winner. The six-day event, hosted by Fish Dayton, the Rhea County Economic Tourism Council and Spring City, Tennessee, is livestreamed each day at MajorLeagueFishing.com and the MOTV app and filmed for broadcast later this fall on Discovery Channel.

Thrift said he found his original starting point during the 30-minute ride through, not far from the takeoff ramp, and spent the day throwing a variety of baits to small, isolated targets – rock piles, brush piles and grass – where fish were set up and ready to bite.

“Today was a good day,” Thrift said. “Kind of tough fishing, but this is my favorite thing to do – fishing isolated targets like I’ve done all day today.

“My only worry is that I don’t have enough locations,” he continued. “I’ve only got about 15 to 20 spots and I probably need 50 to 60 to continue to compete with this field, so hopefully today bought us a little wiggle room and we can go find some more spots when we get back out there.”

Thrift was the leader going into the final period and held off several hard-charging anglers to maintain that lead going into the second day of competition for Group B anglers on Tuesday.

“I caught the majority of my fish on a shaky head and a Texas rig with some BaitFuel Fish Attractant Gel. I also caught two scorable bass on a crankbait today,” Thrift said. “I threw those baits on my signature series Fitzgerald Tournament Shaky Head Rod, with P-Line XTCB Braid and a 10-pound P-Line Spin-X Fluorocarbon Leader with a 1/8-ounce shaky head.

“I ended up catching 12 scorable bass today with that setup,” Thrift said. “That will be the plan going into Day 2 (Qualifying Round 2) and hopefully we make it on to the next round.”

The Top 20 pros in Group B after Day 2 on Watts Bar Lake are:

Anglers will launch each day at 7:30 a.m. ET from the Spring City Boat Ramp, located at 417 Toestring Valley Road in Spring City, Tennessee. Each day’s General Tire Takeout will be held at the ramp, beginning at 4 p.m. Fans are welcome and encouraged to attend all launch and takeout events and to follow the event online throughout the day on the MLF NOW! live stream and SCORETRACKER® coverage at MajorLeagueFishing.com.