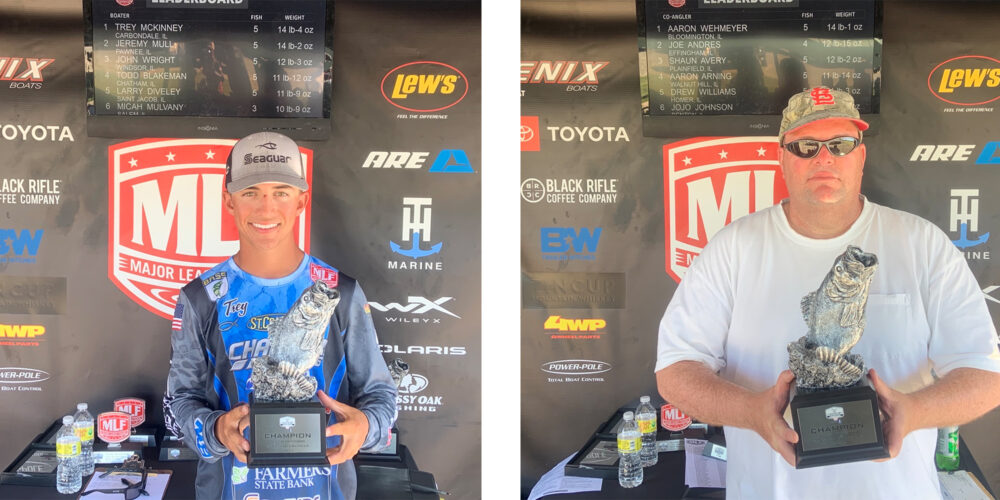 “The first 30 minutes on a rock bite, you can always catch one or two keepers as a safety net during the tournament,” McKinney said. “So we fished that way, and I actually ended up catching one of my big ones – a 4-pounder. That was a surprise.

“I’ve had a problem the last few times I’ve fished getting a big bite,” McKinney said. “When I finally got it right off the bat, I thought, ‘I need to start taking some more risks.’ I felt pretty confident I could catch a limit just junk fishing.”

McKinney said he switched to more of an offshore tactic that focused on edges and sides of points and different targets many anglers might overlook.

“Everybody out there has their ‘milk run,’ and everybody runs their same points,” McKinney said. “Sometimes something a little different doesn’t hurt much.”

McKinney said he employed the use of a Freedom Baits Jig in natural colors with a dyed tail as well as a shaky head rig with plum-colored baits instead of more conventional natural colors.

“I fished my confidence colors,” McKinney said. “If you don’t have confidence in your bait, it’s just not going to happen.”

Michael Black of Toledo, Illinois, caught a largemouth weighing 5 pounds, 6 ounces, the heaviest of the event in the Boater Division, to earn the day’s Berkley Big Bass Boater award of $525.

Mike Swetland of Tamaroa, Illinois, caught the largest bass in the Co-angler Division, a fish weighing in at 5 pounds, 10 ounces. The catch earned him the day’s Berkley Big Bass Co-angler award of $262.