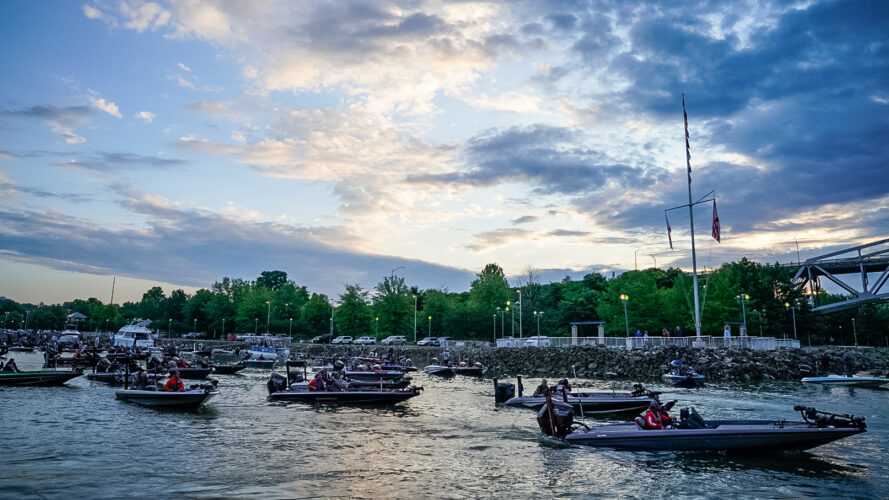 COUNCE, Tenn. – The 2021 Toyota Series Championship Presented by Guaranteed Rate at Pickwick Lake will take place next week in Counce, Tennessee, Oct. 28-30, where the nation’s best bass-fishing pros and top international anglers will compete for up to $235,000 cash. The three-day, no-entry-fee event, hosted by the Hardin County Convention and Visitors Bureau, is the culmination of the 2021 Toyota Series Presented by A.R.E. season, a six-division circuit that offers the best payouts and advancement opportunities for the lowest entry fees available, paving a path to the Tackle Warehouse Pro Circuit and ultimately the Bass Pro Tour.

“We are thrilled to welcome anglers who qualified for the 2021 Toyota Series Championship on Pickwick Lake and to display the scenic outdoor lifestyle and rich history of our area,” said Beth Pippin, Tourism Director of Hardin County Convention and Visitors Bureau. “Hardin County is well-known for our world-class smallmouth fishing and the consistency and reliability we bring to sportsmen, both on and off the water. We feel honored to continue our partnership with Major League Fishing by hosting this championship and are looking forward to a fantastic week.”

Pro Jimmy Washam of Covington, Tennessee, said he felt fortunate to be fishing the championship on his home lake and is excited to see how the tournament unfolds.

“There’s not as much vegetation on Pickwick Lake as we normally have this time of year, and the fish haven’t made a push to the bank yet,” said Washam. “However, the cooler weather coming in should help them get out of suspension mode and start biting. The bigger fish are already getting easier to catch, and we should see a lot of healthy fish in the 3- to 4-pound class, so it’s setting up to be a fun event.

“I expect to see some junk fishing, but I think moving baits will play a big role with the cooler weather and cooler water temperatures, and fish should really start keying in on bait. Depending on what type of water release schedule we have, there will be some traditional tail water baits in play, but I expect there to be a surface bite and a pretty good moving bait bite that will either be full-blown or will develop throughout the event.”

“I’m planning to enjoy myself at this event because there’s no stress for me – whether I finish first or last, I’ve had a great year, and I couldn’t be more thankful for it,” said Washam, who won the Tackle Warehouse Pro Circuit TITLE Championship in August, taking home the prestigious TITLE belt and $200,000 cash. “The TITLE win was amazing, but my family wasn’t with me, so I’m excited to have my wife and my son and a lot of friends from the Memphis area at this event.”

“My greatest accomplishment, outside of the TITLE win, was winning the 2021 Toyota Series Angler of the Year in the Central division,” said Washam. “To me that’s one of the hardest accomplishments to get, because you’re fishing against a lot of great fishermen on their home water. The Toyota Series is the perfect place to prove to yourself whether or not you can make it to the next level, because if you can be successful in that series, then you can fish at any level beyond that.”

Anglers will take off daily at 7 a.m. CT from Pickwick Landing State Park, located at 120 Playground Loop, in Counce. Weigh-ins will also be held at the park and will begin at 3:15 p.m. Outdoor vendors will be onsite prior to weigh-ins Thursday and Friday from 1-3 p.m. and Saturday from 11 a.m. to 3 p.m.

Fans are welcome to attend the event or follow the action online through the “MLF Live” weigh-in broadcasts and daily coverage at MajorLeagueFishing.com. The 2021 Toyota Series Championship Presented by Guaranteed Rate will premiere on the Outdoor Channel at 5 p.m. ET on Jan. 15, 2022, with additional airings to follow on the Sportsman Channel.

The full field of anglers will compete on Days 1 and 2 of the event, with the top 10 pros and top 10 Strike King co-anglers based on cumulative weight from the first two days continuing to the third and final day. The 2021 Toyota Series champions will be determined by the heaviest three-day total weight.

The 2021 Toyota Series Championship field features the top 25 pros, top 25 Strike King co-anglers and tournament winners from each of the six divisions; the top 12 pros and 12 co-anglers from the Wild Card division; the highest finishing boater and co-angler from each of the six Phoenix Bass Fishing League Presented by T-H Marine Regionals and the Wild Card at the All-American; the top three teams from the College Fishing National Championship; High School Fishing National Champions; TBF National Champions; and MLF International champions from Canada, Italy, Korea, Mexico and Zimbabwe.