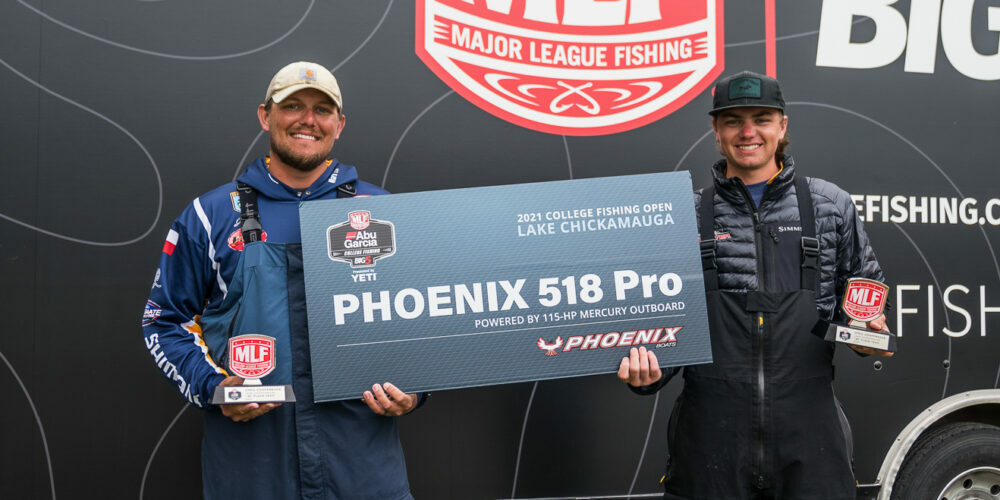 A total of 228 teams competed in the event on Lake Chickamauga, setting the record for the most teams in Major League Fishing history to compete in the College Fishing Open. With such a large field of competitors, Keith and Bird said they didn’t initially believe they could vault to the win based off of their Day One results.

“We didn’t think we had a shot,” Bird said. “There were guys that dropped some really big bags on Day One and we only had 18 pounds.”

After Tuesday’s sun-splashed day and beautiful blue skies, Wednesday brought in cold, driving rain. But Keith and Bird had a plan and executed it methodically and deliberately.

The duo said they had practiced around the marinas dotting Harrison Bay, and that training session gave them confidence for the finale.

“Going into Day Two, we figured, let’s start right back where we caught the 4 (pounder) and the 3 (pounder) the day before,” said Keith. “And immediately Cannon caught another one that was about 3½ pounds.”

The duo said they fished the same pattern both days but thought poor planning may have cost them the chance at a win after Day One.

“We left our stuff down south, probably about 10 o’clock or 10:30 on Day One and started running back toward the weigh-in, just panicking trying to put together a limit,” said Bird. “We were worried that decision had hurt us, but in the long run, it actually helped us because it made us save stuff that we needed to pull out the win on Day Two.”

Bird said winning the tournament is something he will never forget.

“I’ve fished a lot of BFL’s and other tournaments, but I’ve never won a big tournament like this, so it’s crazy.”

The 22 teams that advanced to the 2022 Abu Garcia College Fishing National Championship were:

The Abu Garcia College Fishing presented by YETI Open tournament was hosted by Fish Dayton and the Rhea Economic & Tourism Council. The next event for MLF collegiate anglers will be a Southern Conference tournament, scheduled for April 16 on Lake Somerville in Brenham, Texas.