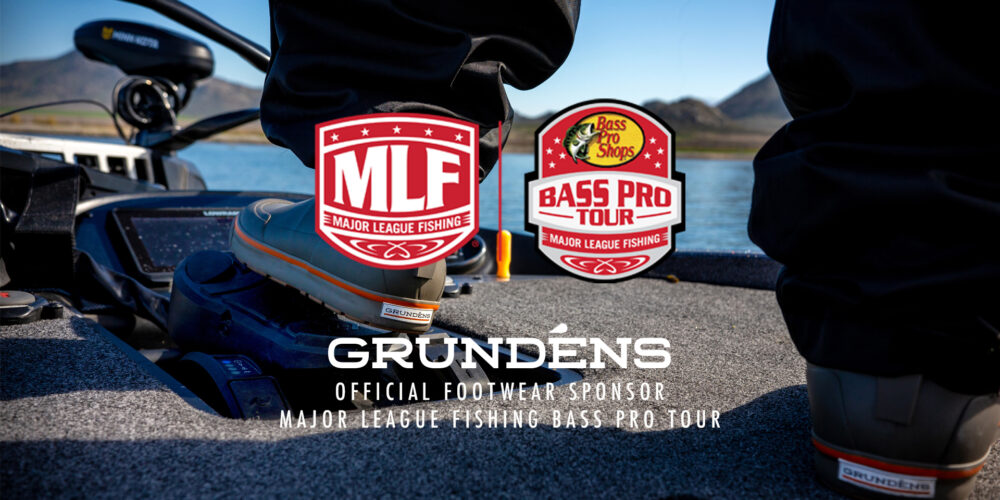 “Bass fishing’s popularity is no secret and we’re ready to have a significant presence in it,” says Grundéns CEO David Mellon. “Grundéns is best known for protecting fisherman and anglers from the elements. ‘We Are Fishing’ is our motto and we’re always aiming to be the most trusted brand in fishing. In particular, our footwear lineup has expanded significantly in the last few years and by partnering with MLF to become the official footwear sponsor of the Bass Pro Tour and the Big5 series, we’ll get it in front of a lot more anglers. Having Skeet, Todd, Bradley, Adrian, and Gerald wearing our footwear and apparel is a testament to the utility and effectiveness of our products in the environments these guys fish year-round.”

“Many tournament anglers in MLF and the MLF BIG5 circuits have started to rely on Grundéns footwear to keep their feet comfortable when they are on the water and make their fishing experience more enjoyable,” said Jim Wilburn, MLF President and CEO. “Grundéns is a natural fit with MLF and our BIG5 and we are very excited to add them to our sponsorship lineup.”

Skeet Reese is a 10-time event winner and one of only a small handful of anglers to win both the Bassmaster Classic and the Toyota Bassmaster Angler of the Year. The Northern California native is one of the top five tournament money-winners of all time, serves on the MLF angler advisory board and runs numerous youth camps throughout the year to enable the next generation of anglers to grow their skills.

Kentucky-based pro Bradley Roy has fished professionally since 2010, when he was the youngest angler to fish in an Elite Series event at only 19 years old. Since then, Bradley has collected 11 Top-10 and 22 Top-20 finishes in his professional career. He also runs several high school tournaments each year in Kentucky that draw more than 200 high school teams and hosts annual benefit tournaments to provide financial assistance to U.S. military service personnel.

Gerald Spohrer, based in Gonzales, Louisiana, is set to enter his fifth season as a tour-level pro. He has recorded eight Top-10 and 13 Top-20 finishes in his career, yielding more than $230,000 in winnings. When not traveling and competing professionally, Gerald also fishes commercially and chases the Louisiana bayous’ redfish and speckled trout.

New Jersey native Adrian Avena has collected 30 Top-10 finishes and more than $600,000 in career winnings in nine years on the professional tours. He’s a commercial captain and owns Jersey Boy Charters, along with working as a commercial conch fisherman. Adrian also competed in and won the Big Fish Division of the 2020 White Marlin Open, the world’s largest billfish tournament.

Todd Kline turned his surfing passion into a profession at the age of 18 and made a living surfing for seven years, competing around the world and achieving four World Qualifying Event Wins. Today, Todd loves competing in bass-fishing tournaments and has racked up 11 Top-10 finishes and four wins on multiple FLW circuits.

Grundéns will also be the presenting sponsor of the MLF Tackle Warehouse Pro Circuit event on Lake Eufaula, May 13-16 in Eufaula, Alabama.

The Grundéns footwear collection was designed to provide anglers with comfortable performance driven footwear options that will outlast the longest days on the water. By prioritizing comfort and traction across several different styles, the entire collection delivers noticeable shock resistance and excellent grip on wet surfaces to keep anglers standing upright on deck all day long.

About Grundéns
Carl A. Grundén began producing traditional waterproof oilskins in 1911 for the fishermen of the North Sea in Grundsund, Sweden. Material shortages during World War I forced the company to close but in 1926 Grundéns Regnklader AB was founded and has been producing quality gear ever since. Today, the brand operates globally from Boras, Sweden and Poulsbo, Washington. Learn more at Grundéns.com.