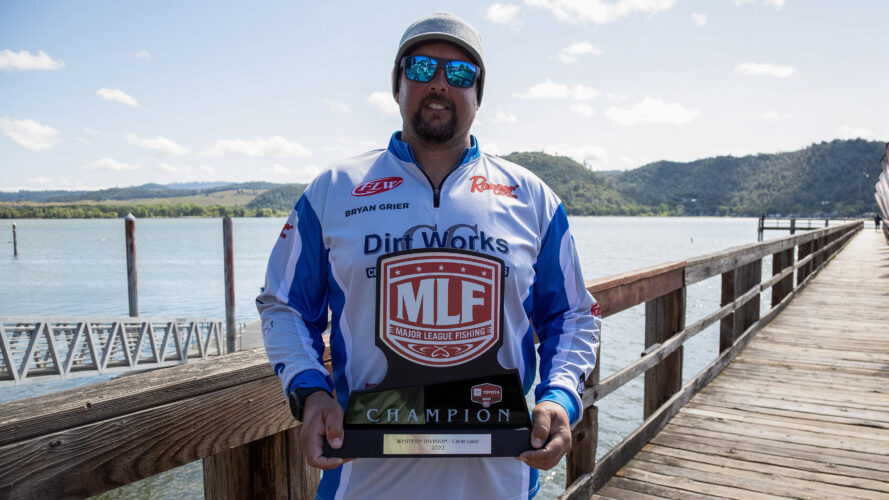 The three-day event, which launched from Redbud Park in Clearlake, was the second event of the season for the Toyota Series Western Division.

Grier noted that a major difference-maker for him was targeting fish in the right stage of the spawn cycle. He felt this improved his chances at the quality bites that could (and eventually did) put him at the top on the final day.

Grier worked over his prespawn fish with a 7-inch Osprey Inline Tournament Talon swimbait and a Daiwa Yamamoto Neko Fat Worm consistently throughout the week. But, unlike many anglers in the Top 10, Grier opted to target boulders as opposed to vegetation and spawning fish.

“I just had a very large wad of fish, they didn’t really change much,” he said. “The first day I just kind of got blown off of it. I think I could have stuck it out, but I didn’t feel safe. There were big waves coming right into where I was fishing. Today though, I had nothing to lose, so I just stuck out there. It was brutal.”

Grier also noted that depth was a predominant factor as many anglers cruised the banks, he opted to target fish deeper that were less affected by windy conditions and were more likely to be in a prespawn pattern.

“I was looking for them a little deeper,” Grier said. “I was looking for my fish in anywhere from 10 to 14 feet. Where most people were up shallow fishing the flats, I stuck out deeper trying to get those prespawn fish.”

For Grier, the come-from-behind victory is not only a culmination of 20 years of professional tournament fishing on the west coast, but also a proper send-off for the San Jose area pro as he prepares to migrate east in the coming month.

“It’s amazing, I’ve been fishing off and on … for the last 20 years, I’ve been fishing as a pro somewhat, here and there,” Grier said. “Some years more than others. I actually just sold my house here and bought a house in Texas. In 30 days, I’ve got to be out of my house. I was just bummed because I’ve done it so long here and never won a (major) tournament in California. So, I’m excited to get one in California.”

Pro Randy Pierson of Oakdale, California, took home an extra $1,000 as the highest finishing Phoenix MLF Bonus member. Boaters are eligible to win up to an extra $35,000 per event in each Toyota Series tournament if all requirements are met. More information on the Phoenix MLF Bonus contingency program can be found at PhoenixBassBoats.com.

The next event for Toyota Series Western Division anglers will take place June 1-3 – the Toyota Series Presented by A.R.E. at the California Delta in Bethel Island, California. For a complete schedule, visit MajorLeagueFishing.com.